The hit stage musical Chicago blows into Dubai with its story of revenge, murder and greed. We spoke to the three stars of the show.

Sum up the plot of Chicago for us. The story centres around two women, Roxie and Velma, who have committed murder and are awaiting trial. They’re represented by a smooth-talking lawyer, Billy Flynn.

What do you like about your character? Her tenacity. She starts the show at the top of her game and within minutes watches it disappear. But she fights on. The word ‘no’ is not an option for Velma.

Is it a physically gruelling show to perform? I wouldn’t use the word gruelling, but it’s hard work, of course. I feel like I’m being shot out of a cannon every time I’m on stage.

Which is the song that stands out for you personally? I love the lyrics of Nowadays. The message I get from that song is to be in the moment. Everything changes, nothing stays the same, but it’s the here and now that matters.

Why is Chicago such a hit on stage? It’s simply a brilliant piece of theatre. It’s timeless and there is truth behind it. It’s what I call ‘the real deal’ of theatre.

What did you think of Chicago the film? It’s such a great movie. I remember watching it in the cinema thinking to myself: I have to do this show. Everyone did a wonderful job.

Is it hard to play your role, having already seen someone else do it on stage or on screen? Not at all. It could be intimidating, but I chose to look at it from a different point of view in that I follow some amazing actresses who have played Velma over the years. I feel fortunate to play the same role as them.

How many times have you performed the role on stage? I’ve been in the show on and off since 2003 so I stopped counting long ago. But no matter how many times I’m on stage playing Velma it never gets old.

Ever been to Chicago the city? Yes, what a place. We’re touring there next year. Performing Chicago in Chicago is such a trip. 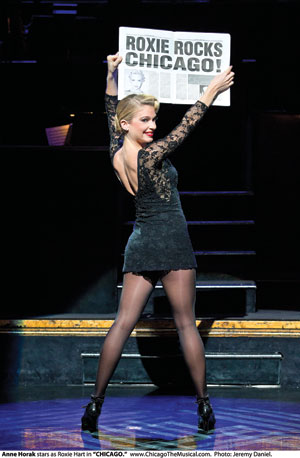 Describe your character. Roxie has a hunger for fame and stardom and is willing to go to almost any lengths to achieve it. Unlike Velma, Roxie is childish but still manages to be cunning and manipulative to achieve what she wants.

What do you like about your character? Roxie Hart is one of the greatest female characters in musical theatre history. It’s a true honour to bring her to life on stage in a show that has made such a mark in musical theatre. She’s funny, smart, naive, selfish, ruthless and steely all at the same time. She makes quite a journey from the beginning to the end of the show.

Is it a physically gruelling show to perform? It can be, especially on days where we do two shows, but it’s a welcome feeling as the show is so much fun to perform.

Why is Chicago such a hit on stage? It’s a combination of a great story, the fantastic Kander and Ebb score, and of course the dancing, originated by [legendary choreographer] Bob Fosse.

What did you think of Chicago the film? Loved it. I thought [the film’s director] Rob Marshall was extremely successful in transferring the stage musical to the screen.

Is it hard to play your role, having already seen someone else do it on stage or on screen? Not at all. It’s important to research and you may be able to get ideas from watching others play the role, but in the end, you take all the information you’ve gathered and make the character your own.

Ever been to Chicago the city? Yes. And it’s one of my favourite cities in the US.

Describe your character.  Billy is the silver-tongued defence lawyer who gets Roxy acquitted. I think of him as a combination of used-car salesman and a television evangelist.

What do you like about your character? He knows how to manipulate every situation.

Is it a physically gruelling show to perform? The dancers have a much more demanding show physically than I do.

Why is Chicago such a hit on stage? The revival opened after two televised, sensational murder trials in the US. I think it speaks to how jaded our society has become. The music is great, the book is smart and funny, and the dancing is very sexy.

What did you think of Chicago the film? The director Rob Marshall did a fantastic job of opening the stage show up for the screen.

Is it hard to play your role, having already seen someone else do it on stage or on screen? No. Everyone has their own take on the role.

How many times have you performed the role on stage? I’ve been playing Billy on and off for more than 14 years, both on Broadway and on tour, so I’ve lost track of how many shows I’ve done.

Ever been to Chicago the city? A few times. It’s a great city.

Culture
Theatre
EDITOR’S PICKS
Ramadan in Dubai: 50 iftars to try
READ MORE
Where can Dubai residents travel? Check out these 14 destinations
READ MORE
Rumours, facts and reveals: New Abu Dhabi bars and restaurants
READ MORE
UAE announces reduced working hours for Ramadan 2021
READ MORE
MOST POPULAR
There's a 30 per cent sale taking place during the long weekend on LegalHomeDelivery.com
Pics of the week: Your best photos of the UAE
Here's why you need to visit Mimi Kakushi's new Friday lunch
New films to watch in cinemas this week: May 13 to 19
Torno Subito's new lunch menu offers a quick mid-week vacation
YOU SHOULD CHECK OUT
Our website uses cookies and other similar technologies to improve our site and your online experience. By continuing to use our website you consent to cookies being used. Read our privacy policy here.