Cristiano Ronaldo opened the Dubai International Sports Conference at Mina Al-Salam on December 28, and What’s On was there to hear the Real Madrid and Portugal superstar be quizzed by legendary referee Pierluigi Collina.

Here’s what he had to say.

Let’s look ahead to the World Cup, which takes place next summer in Brazil. How do you feel about Portugal’s chances?
“I will be honest, I think we have to take it game by game because we have a very difficult group, starting with the first match against Germany, a fantastic team. For our country, passing the group is very important.” 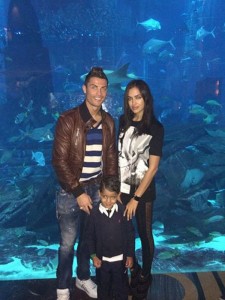 Portugal have gone very close in previous tournaments, reaching the finals or semi-finals. What is missing to take that next step and win?
“It has been difficult for us in the crucial moments. You see in the last few competitors, Spain have been the winners, but you ask yourself, ‘why did they not win before?’ They deserve it now, of course, as they are one of the best national teams. But it is more difficult for us, we don’t have the quantity of players like Spain but that doesn’t mean we can’t compete and fight for an important trophy like the Euros or World Cup.

“It will be tough but I think the future is bright and better for Portugal. We know it will be difficult but I hope in the future we will get a little bit more lucky. We lost to Spain on penalties in the World Cup. That is bad luck, it is a lottery. But I cross my fingers the future will be better and that we can win an important trophy.”

The World Cup will be your sixth major tournament. Your first was in your own country. How do you remember the experience of Euro 2004?
“We felt the pressure of playing at home but that was good pressure. We had all the supporters around us, all the families in all the cities had flags in the window of their house. [Manager] Luiz Felipe Scolari mentioned this when he joined us, he spoke all the time of bringing the whole country together. It was a fantastic moment, especially for me, it was amazing.

“We started badly, losing the first game, when you gave a penalty, not the best decision! And when you start with defeat you have to be very strong mentally and we were, but in the end we lost in the final. But the experience was amazing.”

Every year, you seem to improve your figures – the goals, assists. How do you keep on doing this?
“Hard work and dedication. Every season is a new challenge to me and I always set out to improve in terms of games, goals, assists. The last six or seven years, I am always better than the previous year. It is part of me to make improvements and I try to dedicate myself all the time. Every year is a challenge for me. This is why I continue to it, because I love to do it, and scoring gaols is my passion. It won’t be easy to beat my goals next time, but I will try. You must always try.”

Which one rule would you change in football?
“One rule that will work if it is used everywhere, is that when you have a free-kick, the referee puts the mark on the floor to make sure the defenders keep their distance.

“Putting the chip in the ball, I don’t agree with that, that is just my opinion.”

And finally, I am a referee, so I must ask, how is your behaviour with the referees?
“Ha, it is very good. I will be honest, some referees, you can speak with them, you are allowed, and others are more serious. I like it to be more friendly when you speak with them. I couldn’t do that with you, you would always say ‘No Cristiano, No’! With some of them now you can speak, you tell them they make a wrong decision, and they speak back, they explain. I know they have a tough job, but it is important to communicate.”

The Dubai International Sports Conference at Mina Al-Salam is open to the public, though some appearances by players and managers will have a strict admission policy. For more information visit dubaiisc.ae/en/