What is Christmas without a trip to the theatre, be it for panto or something a little more highbrow? Here’s three different experiences you can enjoy around Dubai this week.

SNOW WHITE AND THE SEVEN DWARFS
December 20 to 31 (no show on December 25)
‘Mirror, mirror, on the wall, who is the fairest of them all?’ Few fairytales capture the spirit of Dubai quite like Snow White And The Seven Dwarves, which hits town this Christmas. The show is brought to you by UK-based touring company h2 Productions, who return to Dubai for the seventh consecutive year. In the great British tradition of pantomime, you can bank on a flamboyant dame and plenty of audience participation. 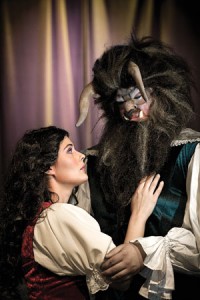 BEAUTY AND THE BEAST
December 20 to 31 (no show on December 25)
The classic tale of this famous odd couple sings and dances its way on to stage at the Madinat Theatre. We speak to the show’s stars, Thiart Li and Caitlin Kilburn

“My favourite song to perform is the duet with Belle, Just Give Me A Reason,” Thiart Li plays Beast, told us. “Our voices complement each other so well.”

Caitlin Kilburn, who plays Belle, agrees. “It’s a toss up between Just Give Me A Reason, an emotional duet with Beast, and The End Of The World, when I think Beast is dead. They are such beautiful songs.”

And why do they think Beauty And The Beast is still such a popular story?

“It’s one of those timeless stories that has it all: loveable characters, magic, music, a prince in disguise and the universal theme of love,” Caitlin explains. “It’s also great that the lead is such a strong female character who loves her family, stands up for herself and takes control of her destiny.”

Thiart added: “Beauty And The Beast is still such a well-loved story because I think it is still relevant today as it talks about true love, not judging people by their appearance, and being true to your heart.”

DRAMA CAMP FOR CHILDREN
December 21 to 24
If a huge blizzard hits Dubai, how will everyone get home for Christmas? That’s the theme of a four-day Winter Drama Camp hosted by Kids’ Theatre Works. Participants create their own show, with acting, singing and dancing culminating in a performance for family and friends.

Culture
Theatre
EDITOR’S PICKS
Here's the full list of UAE public holidays in 2023
READ MORE
23 incredible things to look forward to in the UAE in 2023
READ MORE
Hidden gems: 10 UAE desert pop-ups to discover this winter
READ MORE
Where to travel in 2023: 10 new flight routes from the UAE
READ MORE
MOST POPULAR
Ras Al Khaimah Fine Arts Festival returns this weekend
The best new bars in Dubai
15 Dubai pool and beach passes that are all fully redeemable
Try something new: 21 brilliant new things to do in Dubai
Dr Who, C3PO, Andy Serkis and more celebs confirmed for Comic Con
YOU SHOULD CHECK OUT
Our website uses cookies and other similar technologies to improve our site and your online experience. By continuing to use our website you consent to cookies being used. Read our privacy policy here.