Dubai Tram begins testing... now only 10 months until we can use it!

Dubai’s long-awaited tram network will break new ground on Sunday when the first of the carriages are tested on a stretch of track along Al Sufouh Road.

The trial runs between the depot at the Police Academy to Knowledge Village are the first of three ahead of what the Road and Transport Authority expect to be an official launch in November this year.

In December, seven coaches arrived in the region from France, in what was the first significant step forward on the Dhs3 billion project which will connect parts of Dubai Marina, JBR, Media City to Mall of the Emirates and Madinat Jumeirah.

But today’s first tests are the first real sign that an exciting new technologically advanced transport system will finally come to fruition.

Speaking to The National today, an RTA official said: “The tram is a totally different system to the Metro. The Metro has no interaction with road users, whereas with a tram, there are certain areas where the tram route intersects with the road. There will be special traffic lights and signs. People’s knowledge of the tram signs, the signalling and how it all ties together will be very critical.”

The tram is expected to carry about 27,000 riders per day at the start of operations in 2014, rising to 66,000 per day by 2020, along a route which extend 14.6 km. Passengers will be able to ride in gold class, while there will also be a dedicated carriage for women and children.

The second stage of testing is set to start in mid-April, while the final stage prior to launch will be in June. 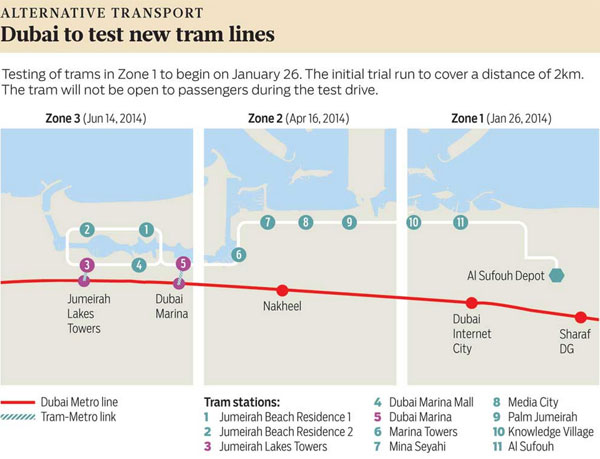