Is this the best skydiving pic ever? Meet the man behind the lens

Where are you from? The Gold Coast, Australia.

When did you come to Dubai? I moved to Dubai with my wife Emma in May last year. 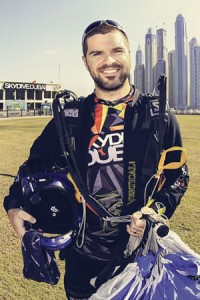 What do you do here? I work at Skydive Dubai near Dubai Marina. Some of my jobs include taking people for their first tandem skydive or jumping out next to them to film their experience. My job is quite simply to jump out of planes all day every day.

How long have you been skydiving? I did my first solo skydive back in Australia in February 2008. I got into it just like most people do: I went for a tandem skydive and absolutely loved it, so I decided to complete my solo course. As soon as I got my licence I realised it was all I wanted to do, so I pursued it professionally and have now completed over 4,000 jumps.

What’s been your biggest skydiving achievement? Participating in the Indoor Skydiving World Record at Inflight Dubai, in November, was pretty awesome. The record was for the most people flying together at the same time. We got 27 and the previous record was 21.

Tell us about the photography competition you recently won? Skydive Dubai hosted the Dubai International Parachuting Championships late last year. There was a photography competition where you could enter up to three of your best photos taken during the event. My job during the event was to jump with and film the competing teams and while filming the French Freefly team, I took a photo of them that I really liked so I entered it. It was of the three-man team freefalling while in the background you can see the World Islands, Burj Al Arab and the Burj Khalifa. I was lucky enough to beat a lot of other amazing photos to take the first prize.

Any scary skydiving moments? It’s not as dangerous as most people assume!

Have those impressions changed? I’m enjoying Dubai more and more every day. I love living here and have no intentions of leaving any time soon.

Favourite place to catch up with friends? I think Zero Gravity in the Marina has to be one of the best places to hang out in Dubai.

How would you sell Dubai to someone who has never visited the city? Dubai almost sells itself. It’s such an intriguing place with spectacular sights and things you just can’t do anywhere else in the world.

What’s your top tip for getting the most out of Dubai? Make sure you do everything. There are so many things to learn and experience in Dubai. When I eventually leave here I want to be able to say that I did it all.

What’s next for you? My wife and I are a freefly skydiving team and we’re currently training hard to compete at the Australian Skydiving Nationals in April. If we get a gold medal at the Nationals, we’ll qualify for the world Championships in the Czech Republic later this year.

This interview first appeared in Hype magazine. To read more from the team check out their Facebook.

Outdoor
Sport & Fitness
EDITOR’S PICKS
Here's the full list of UAE public holidays in 2023
READ MORE
23 incredible things to look forward to in the UAE in 2023
READ MORE
Hidden gems: 10 UAE desert pop-ups to discover this winter
READ MORE
Where to travel in 2023: 10 new flight routes from the UAE
READ MORE
MOST POPULAR
With its unique decor, Dubai's La Nina restaurant evokes tales of distant travels
Reservations are now open for French restaurant Fouquet's Dubai
The colourful Sharjah Light Festival returns next week
Relive those cosy winter moments at Chalet 105 at Twiggy
There are some big road closures in Abu Dhabi this weekend
YOU SHOULD CHECK OUT
Our website uses cookies and other similar technologies to improve our site and your online experience. By continuing to use our website you consent to cookies being used. Read our privacy policy here.