One of the world’s most famous sportsmen touched down in Dubai and proudly proclaimed: “It is my wish that my home country will follow the example of the UAE.”

Pele, who is widely regarded as the greatest footballer of all time, spoke glowingly of the city which he first visited in 1973 as part of a tour of the region with his then team, Santos.

The Brazilian remains the only man to have lifted the World Cup three times – in 1958, 1962 and 1970 – and continues to be honoured by the sport. Only last week he was awarded the FIFA Ballon d’Or Prix d’Honneur for his lifetime achievements.

The superstar was in town to announce himself as an Emirates Global Ambassador as part of the airline’s relationship with FIFA ahead of the World Cup. And he said: “Dubai has made a name for itself on the international stage. It has changed so much from when I first visited in the 1970s. I see a thriving city with great infrastructure for tourism and business, capable welcoming the world and connecting with the world. My wish is that the World Cup will help unleash and showcase this same potential in Brazil.”

Pele was then quizzed on a number of footballing issues, including the state of the game in the UAE. 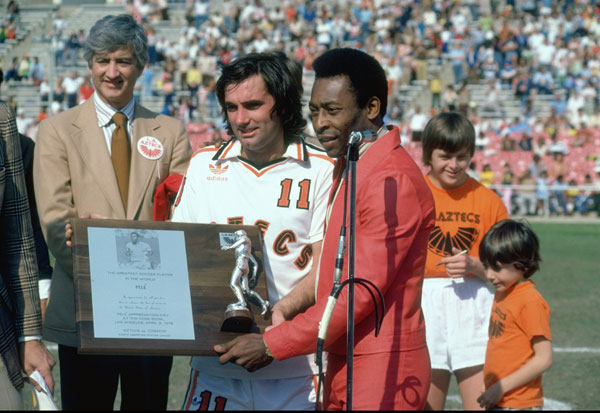 He said: “Today, because of he facilities here, the UAE has an opportunity to develop the right way. You didn’t have a team, a game before. Now there is an improving respect and people know it will not be a really easy game.

“I remember being at New York Cosmos, and people asked the same, they asked about the USA and when they would be on the same level as at the traditional teams. Now you see the USA team is very good – the ladies are the best, as well – and I think it will be the same here because you have the coaches and players with the right attitude to work – they want to learn. Then you need some luck, but I think the football will come.”

Pele turned his attention to his team’s hopes at the World Cup, adding: “We have to be prepared. The World Cup is always very tough for every team. Fortunately I think Brazil, after the Confederations Cup, have set up a team to move forward.

“Everybody knows the Brazilian team was always strong in attack – it’s what I used to do! But for the first time in the history of our team we are prepared in the midfield and at the back. We won the Confederations Cup against Spain, but we had a little problem in the attack. This is something afferent for us, to be strong in defence.

“We have to respect every team, but my opinion is, six months before the final, the best team I have seen is Spain, no doubt. They are an organised team, but there is Germany as well, and you must respect the traditional teams like Italy, England, Portugal and Argentina.” 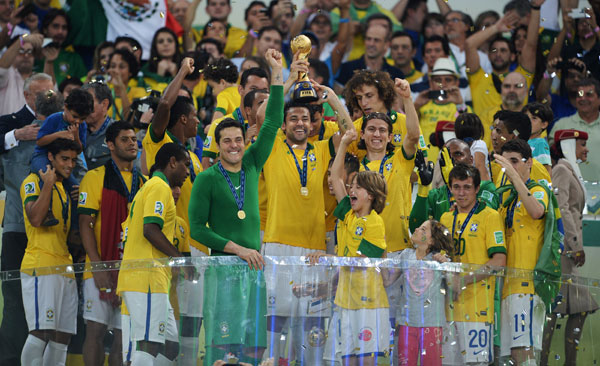 The World Cup later this year will be the first time the five-time winners have hosted the tournament since 1950. Then Uruguay caused a major upset when they beat the host nation in the final.

When asked about his memories of that defeat, Pele revealed: “It was a very important time in my life, I was eight or nine. My father was a football player in a small town near Sao Paolo and the day of the final he invited all the players from his team to come to my house to listen to the radian as we didn’t have TV.

“I was with lots of kids, the sons of other players. And I remember the silence. I came out of my house and saw the players and my father crying. I asked him why this was and he said, ‘It is not good, we lost the World Cup’. That has stayed in my mind.

“Now I tease my son, he is 16 and he has started playing football. I say we will have to win the World Cup because I don’t want my son to see me cry!” 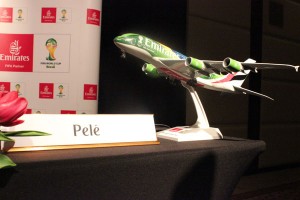 Emirates operates daily flight from Dubai to Rio de Janeiro and Sao Paulo, and is expected to transport around 18,000 passengers during the month-long World Cup this year.

Of the partnership with Pele, HH Sheikh Majid Al Mualla, divisional senior vice president of Emirates, said: “Pele is a global icon. He is recognised, respected, and an inspiration to people around the world. He represents the best values of ‘the beautiful game’ of football, not only because he was a great player, but also because he uses the power of sport to connect people – with each other, with communities, and with opportunities. In many ways, Pele stands for the same values that Emirates does. He is the ideal choice for our Global Ambassador and we are thrilled that we will be partnering with him.”