How you can be part of the Dubai Food Festival

Heaven is a place on Earth, Food Heaven that is. For the next three weeks, the Dubai Food Festival will celebrate the culinary expertise of the Emirate with activities, tastings, offers and entertainment, from Michelin starred chefs to street food, and everything in between.

Set to become an annual spectacular, this inaugural edition kicks off on February 21 with the first of 10 individual events (see for yourself below) targeted at both consumer and business – Gulfood and Taste of Dubai, as well as new events such as the Dubai Food Carnival and The Big Grill – most of which feature at least one celebrity chef. The likes of John Torode, famed for his role on BBC show Masterchef, Sanjeev Kapoor, whose restaurant Signature at Melia Dubai is one of Dubai’s most popular for high-end Indian cuisine, and Jean Christophe Novelli, the charismatic Frenchman will all be appearing.

OUR PICK OF THE BUNCH
Emirates Airline Festival of Literature, March 4-8
Michelin-starred chef Greg Malouf – famed for his Middle Eastern cuisine – will appear at the literature festival to discuss the art of food writing.
emirateslitfest.com 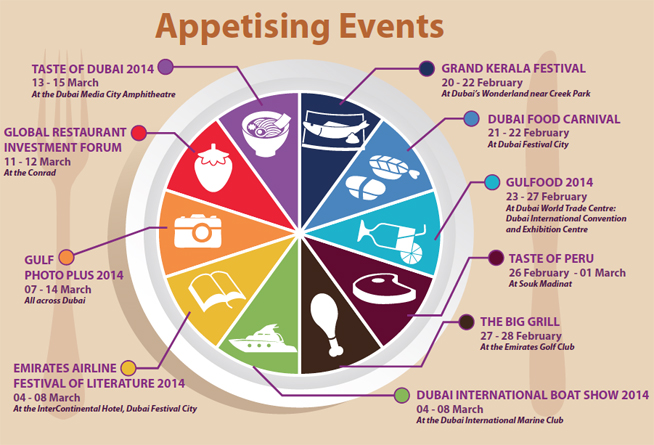 For more information on all the events and how you can get involved, visit dubaifoodfestival.com.

Eat & Drink
Restaurants
EDITOR’S PICKS
Here's the full list of UAE public holidays in 2023
READ MORE
23 incredible things to look forward to in the UAE in 2023
READ MORE
Hidden gems: 10 UAE desert pop-ups to discover this winter
READ MORE
Where to travel in 2023: 10 new flight routes from the UAE
READ MORE
MOST POPULAR
Dubai's 122nd floor restaurant, At.mosphere, has a stunning new look
Good news: You can now get Joe and the Juice delivery in Dubai
Staycation review: Radisson Beach Resort Palm Jumeirah
Take a romantic escape to Kempinski Hotel Mall of the Emirates this Valentine's Day
Sweep your loved one off their feet with dinner at Bagatelle
YOU SHOULD CHECK OUT
Our website uses cookies and other similar technologies to improve our site and your online experience. By continuing to use our website you consent to cookies being used. Read our privacy policy here.