As we first revealed back on January 30, soul icon Lionel Richie will perform in Dubai in April, with tickets going on sale on February 11.

The gig at the 10,000-capacity Dubai Media City Amphitheatre will take place as part of the 64-year-old’s appearances in Australia and New Zealand in early March, and Japan between March 27-31.

Titled ‘All the hits, All Night Long’, Richie’s first North American tour in a decade was so popular that 11 dates on the sub-continent were soon added. John Farnham, an Australian pop singer will also join the tour for the dates Down Under. 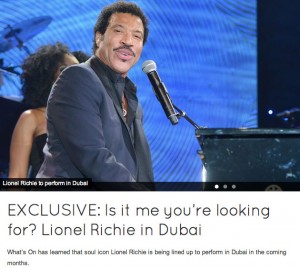 Famous for his silky smooth voice and romantic ballads, including ‘Hello’, ‘All Night Long’, ‘Say You, Say Me’, ‘Three Times A Lady’, ‘Easy Like Sunday Morning’ and ‘Dancing On The Ceiling’, the American singer-songwriter first found fame in the late 1960s with his R&B band the Commodores. He went solo in 1982 and over his five decades of success has won five Grammy awards, sold 100 million albums and amassed a personal fortune in excess of $200million.

Fans of the singer can regularly hear his ‘All Night Long’ played as the soundtrack to the world famous Dubai Mall fountains.

Apart from our own What’s On Awards, the Dubai Media City Amphitheatre by the lake has played host to several big stars in recent years, including Alicia Keys and Bruno Mars.

News
Nightlife
EDITOR’S PICKS
9 royal-approved Dubai restaurants
READ MORE
12 incredible rooftop pools in Dubai to check out
READ MORE
16 of the best beach bars in Dubai for sundowners
READ MORE
Covid-19 rules in Dubai: all the updates you need to be aware of
READ MORE
MOST POPULAR
Join us for a preview of Fairmont Bab Al Bahr's Valentine's dine around
Pics of the week: Your best photos of the UAE
Get groceries for as little as Dhs1 with this huge weekend sale
Review: Li'Brasil is the chic new restaurant at Address Beach Resort
3 of the hottest debut authors at the Emirates LitFest 2021
The day of love is taking centre stage at W Dubai – The Palm
YOU SHOULD CHECK OUT
Our website uses cookies and other similar technologies to improve our site and your online experience. By continuing to use our website you consent to cookies being used. Read our privacy policy here.