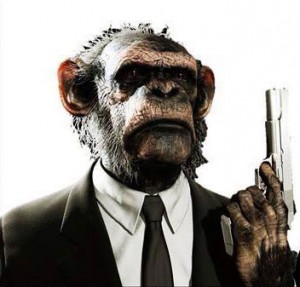 Trendy nightspot Vanity have given a lifetime ban to one person and vowed never to see a repeat an incident last week which left clubbers demanding a boycott of the venue.

The club came in for heavy criticism after images emerged of a monkey being paraded around the venue, with some claiming it was seen to be offered alcoholic drinks.

However, in a statement on their Facebook page on Monday night, Vanity, which is situated at Al Murooj Rotana, said: “We would like to state that Vanity Nightclub Dubai has never ‘knowingly’ allowed nor will allow any animals into our premises. Concerning the incident that occurred on January 27, the owner along with his animal, were immediately removed from the premises once staff were alerted.

“The owner and his party that attended on the night have been banned from ever entering the venue again. We thank you all for expressing you’re concerns and please be certain that we share the same view as everyone when it comes to the treatment of animals.”

The statement follows a whole day of backlash on social media after the images circulated online. Among the critics was party-goer Tiya Fazel, who is quoted in 7Days as saying: “It’s disgusting. Absolutely shameful. I know a DJ who says he’s ashamed to be involved in the nightlife scene in Dubai after seeing this. A monkey is a wild animal. You shouldn’t even have them as pets. But to take it to a crowded club with lots of smoke, loud music and intoxicated people takes it to a whole new level.”

Also appearing in 7Days, was a comment from Kate Hart, which read: “I can’t believe my eyes. This is animal abuse, pure and simple.”

In what is a funny coincidence – though perhaps not for Vanity – another promoter for a night at the club used a mocked–up image of a monkey in a suit carrying a handgun in promotional material earlier this month, pictured above. The company are at pains to point out that is in no way connected to real monkey that appeared in the venue last week.

Clubs
News
Nightlife
EDITOR’S PICKS
Exclusive Reveal: Topgolf Dubai is here and ready for action
READ MORE
65 of the best outdoor bars and terraces in Dubai
READ MORE
7 brilliant dining deals in Dubai this month
READ MORE
18 of Dubai's most Instagrammable breakfast spots
READ MORE
MOST POPULAR
16 of the best beach bars in Dubai for sundowners
A new pop-up gin garden has just opened in JBR
Abu Dhabi updates testing and quarantine rules for those vaccinated
Enjoy savings on organic wine and free delivery from African & Eastern Direct
The best restaurants at The Pointe with Palm Fountain views
YOU SHOULD CHECK OUT
Our website uses cookies and other similar technologies to improve our site and your online experience. By continuing to use our website you consent to cookies being used. Read our privacy policy here.