Gilles Peterson is a DJ who goes the distance both literally and figuratively. A tireless champion of music from the world’s furthest corners, Gilles is also in the final stages of training for this year’s gruelling London Marathon.

And post-marathon he’s looking forward to working with as-yet-undiscovered producers in Cuba. Our friends at Hype find out more… 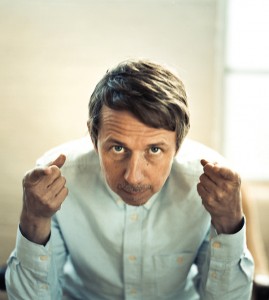 Despite a host of other commitments, you still play a lot as a club DJ. Where are your favourite places to play? DJing’s never been more fun for me. I’m going to do an eight-hour set in a warehouse in London the week after I’ve run the London Marathon in April. I’m kind of done with turning up at 2am and playing for 90 minutes though. The thing for me is finding a club where I can play all night. So there’s a club called Precious Hall in Sapporo, Japan, that I love and I’ve got residencies in LA and Paris. I’m looking at building my own club in London. That’s my dream at the moment.

World music, for want of a better term, seems to have shaken off its fusty image of late. Why do you think that is? People are much more open to all kinds of music now. I call it the iPod generation. It’s helped that the leaders in electronic music are really open to different kinds of music. People like Four Tet, Floating Points, Caribou and Thom Yorke. Having someone like Four Tet producing [Syrian wedding singer turned unlikely hipster] Omar Souleyman is testament to that.

You’re involved with the Havana Club Cultural Mix project again, an international search for undiscovered young producers, taking those that shine out to Havana to produce music with you. What appeals to you about Cuba and its music? Cuban music laid the foundations for so much music that I love. Funk, disco, jazz; they all have those Latin rhythms that originated in Cuba. Also, because of its political situation over the past 50 years, it’s completely different to anywhere else. That’s had an effect on the people and the music in a good way. Cuba’s beginning to change but they’re making the transition really well. It’s a magical time to visit.

You’ve been to Havana a number of times with Havana Cultura to create albums with Cuban musicians. What are you expecting from this year’s trip? When I took [dusbstep producer and DMZ label founder] Mala out there a few years ago, it was great to throw someone like that into a different situation. The album that came out of that was brilliant and two years on, you can feel its influence, even in some new music that’s coming out of Cuba. So I want to do more of the same. Put people in a new environment and see how things change.

The trouble with music sometimes is that people are always doing it in the same place – so it doesn’t change or evolve. We’re giving people the chance to work in a place and with musicians they would never have had the chance to before. Especially the percussion musicians they have out there, it’s going to be wild!

Which moments stand out for you from previous trips to Cuba? They have an electronic scene out there and little raves that pop up so watching Mala introduce Cuba to dubstep was incredible. He had his acetates and was the first person to bring dubstep to Cuba, and they loved it because they have that sound system culture. We gave DJs out there dubstep records so I’m excited to see how that will have influenced them this time round. We opened a door to a different kind of dance music for them.

You’re joining Carl Cox in Dubai soon for Live @ Atlantis… Carl Cox is an amazing person and such an incredible ambassador for music. He is a purist and comes from exactly the same history as me. He is a jazz funk boy and is a phenomenal DJ in that genre, which few people know. His disco funk sets are as tight as his techno sets.

JUAN PABLO TORRES, Con Todos Los Hierros
“What’s great about Cuban music is that it got on its own course because there was little outside influence. On this he’s using electronics but in a very different and original way.”

IRAKERE, Irakere
“This is a group and the first Cuban music that got me. It’s kind of disco and still sounds amazing in a club. This is the Cuban record most relevant to anyone interested in club culture.”

MALA, Mala In Cuba
“Mala’s taken on Cuban music and done something new with it. I’m excited to see how it’s influenced them when we go back out there.”

Nightlife
EDITOR’S PICKS
Here's the full list of UAE public holidays in 2023
READ MORE
23 incredible things to look forward to in the UAE in 2023
READ MORE
Hidden gems: 10 UAE desert pop-ups to discover this winter
READ MORE
Where to travel in 2023: 10 new flight routes from the UAE
READ MORE
MOST POPULAR
With its unique decor, Dubai's La Nina restaurant evokes tales of distant travels
Reservations are now open for French restaurant Fouquet's Dubai
The colourful Sharjah Light Festival returns next week
Relive those cosy winter moments at Chalet 105 at Twiggy
There are some big road closures in Abu Dhabi this weekend
YOU SHOULD CHECK OUT
Our website uses cookies and other similar technologies to improve our site and your online experience. By continuing to use our website you consent to cookies being used. Read our privacy policy here.