Scouse honour! It's not all about Carl Cox and Gilles Peterson, you know

Yousef got his start in dance music in a way that very few do these days: he won a DJ competition in Muzik Magazine in 1998 with a mixtape he made at home, in one live take, on decks, recorded to cassette (remember those?). It’s still up on his Soundcloud if you fancy checking it out, and maybe you should, because it launched the career of one of the UK’s most important figureheads.

That statement is not just hype, it’s pretty much fact, as was proven recently when BBC Radio 1 veteran Pete Tong inducted Yousef into his Hall Of Fame following artists like Silicone Soul, John Digweed and Sasha.

“I was quite taken back by it in honesty,” beams the big man in a lilting Liverpudlian accent. “They listed all the things I’ve done to contribute to the dance music scene, so I guess I had been earning my stripes without realising. I only feel like I’m just getting into shape with my career, too, really. I have a long way to go and much more to say as both a DJ and producer.” 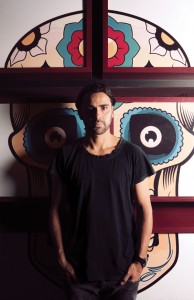 That’s a bold thing to say given how much he has achieved already.  Arguably Yousef is best known for being the driving force behind the Circus night, a party that, since 2002, has hosted events in his native Liverpool at places like Cream and a disused theatre, The Masque. As well as those events, the brand holds a monthly residency at London’s Egg and has long championed the finest house talents the scene has to offer.

In 2009 Circus also became a label. Since then it has spawned a number of compilations and has brought on the careers of a wealth of production talents including Acid Mondays and Tom Flynn, at the same time as offering up material from house heroes like Derrick Carter and Green Velvet.

“It’s growing and building well, it’s a proper label now,” beams Yousef when asked about the Circus modus operandi. “I sign a wide range of artists and a wide range of music, from really cool quirky tracks to unknown musical talent like Kydus. I don’t really have to have a strong relationship to sign a track, but it does help in building a team, which is what I’m doing now.”

Of course, bolstering the label’s output is Yousef’s own music, plenty of which you are likely to hear when he plays Live @ Atlantis here in Dubai on Friday. It’s also come on Carl Cox’s Intec and Nick Curly’s Cécile labels and is often chunky, loopy affairs with an off-kilter sample, an instrumental hook or a bit of Latin flair. Next up is a release on Loco Dice’s influential Desolat label.

“I love the warmth and richness of analogue studios, the sound of the ’70s and ’80s,” he explains. “I try to recreate that warmth but with a pretty basic set up it’s hard to match. I listen to Rufus and Chaka Khan’s Ain’t Nobody all the time, trying to get my head around the quality and dynamic in the production – 30 years on and it’s
still astounding!”

Much of Yousef’s discography is made up of collaborations. He has worked with everyone from Gene Farris to Derrick Carter, Steve Mac to Carl Cox, but also with plenty of real life vocalists. “Sometimes it’s cool to bring another dynamic to the ideas pool,” he says on working with others. “I tend to write most of my lyrics but even still, the vocalist or musician should always be considered part of the project, which is why I have people like David Williams, Tom Crew and the others all openly credited as collaborators.”

Given that he DJs multiple times a week, runs a well known party brand and a busy record label, you have to wonder if Yousef has anyone helping him on any of these fronts because by now everyone knows that the biggest stars have plenty of help, whether it’s Riche Hawtin having someone download his promos or Solomon’s tour manager making sure the six-foot-plus Croat has enough leg room on each and every flight. Not so Yousef, though.

“I’m not the type of person who says he does things and then gets someone else to do it. I’m self-taught, as a DJ for 20 years, as a producer for 12 years, and with the Circus label and events. Of course, I have a small team and partners to make it all happen – shouts to Richard, Sean, Lewis, Jay and Jon Waller – but I’m hands-on with everything; I book a lot or most of the Circus events and A&R and sign all the artists to Circus Recordings. I see them all as hobbies. I do them all for fun so even though I work hard I enjoy all my attributes.”

Making all this an even more impressive juggling act is the fact that the start of the year saw Yousef become a father. And weekly he also turns out his own internet radio show, entitled 21st Century House Music. “I just wanted a place where I could represent what I’m doing today. I always look at the ‘now’ musically and wanted to share my passion for new underground music so I began a show,” he says. “The format is either a live DJ set from my travels, or a showcase of entirely brand new music I’ve bought or been sent: it’s a way to break new artists.”

After admitting that it is harder than ever to get your music heard in 2014 given the amount that is being released each and every week, Yousef reckons, “I’m always creating, one way or another. If it be new music, new artists or just non music related ideas – my wife and I have an ideas book in which we scribble down ideas all the time.”

Far from being just an ideas man, though, this modern house champ is someone who keeps coming good on his potential time and time again.

Nightlife
EDITOR’S PICKS
13 Sheikh Hamdan-approved restaurants in Dubai
READ MORE
Dubai brunches temporarily banned in new preventative measures
READ MORE
12 upcoming Dubai mega-projects we can't wait for
READ MORE
16 of the best beach bars in Dubai for sundowners
READ MORE
MOST POPULAR
These Abu Dhabi cinemas could be serving alcohol when they return
Cats, robots and motorbikes: 3 of Dubai's quirkiest cafes
Win! Dhs500 to spend at Cloud Restaurant & Lounge
Fireworks return to Global Village for the final weeks of Jubilee Season
Emirates Economy Class customers can now purchase adjoining seats
YOU SHOULD CHECK OUT
Our website uses cookies and other similar technologies to improve our site and your online experience. By continuing to use our website you consent to cookies being used. Read our privacy policy here.