What’s On profiles Kings of Leon ahead of their Dubai show at Atlantis The Palm. Get tickets information for the King of Leon in Dubai and read album reviews.

Kings Of Leon are a world-famous rock band with pots of money, stacks of hits, shelves of awards and supermodel wives. But life hasn’t always been this easy for the boys from Tennessee. The family band – brothers Caleb Followill, Nathan Followill and Jared with their cousin Matthew Followill – had to recover from a meltdown in July 2011, in which singer Caleb walked off stage during a gig in Dallas, forcing the band to cancel the rest of the tour. Nathan tweeted the next day that he was “ashamed and embarrassed by last night’s fiasco”. Jared added, “There are internal sicknesses and problems that have needed to be addressed.”

There were rumours that Kings Of Leon would break up, something the band insist was never discussed. Instead, they regrouped and made their latest album, Mechanical Bull, which has been tagged as a comeback record. “I remember saying it had to be good,” says Matthew of the new album, which features the hit single Supersoaker. “Come Around Sundown didn’t happen like we wanted to, so that was the only conversation we had: that this record [Mechanical Bull] has to be great or we’re not putting it out.”

Jared says, “After Only By The Night we had nothing to prove and that probably came through in the music [on Come Around Sundown]. Caleb admits, “I pretty much checked out for that record.” 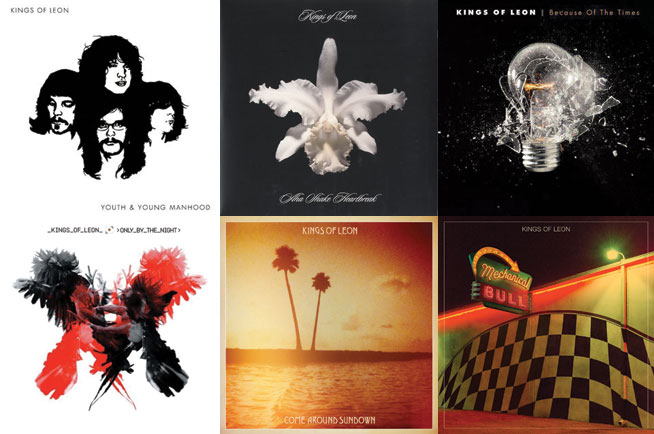 Kings Of Leon exploded in 2003 with their debut album Youth And Young Manhood, which demonstrated Caleb’s trademark growl and the band’s bluesy, scratchy sound. More hit albums followed with Aha Shake Heartbreak (2004), Because Of The Times (2007) and Only By The Night (2008) before the 2010 blip of Come Around Sundown. Caleb says, “Seeing beautiful, famous girls backstage at our shows was great, but then you realise these people are just talking to you so they can enjoy your party – we became sick and tired of Kings Of Leon.” Nathan adds, “We were one of those bands famous for everything but our music.”

Of their new album, Jared says, “This time we felt like we wanted to be cool again.” Caleb agrees, “If we can keep our sanity, I think that one day we’ll be a really, really great band.”

REPORT CARD
Youth And Young Manhood (2003)
There’s absolutely nothing revolutionary about what these guys are pulling, but they synthesise a gritty staccato new wave attack with the arrogant, swaying machismo of old-school boogie with an authority far beyond their few years. – Launch.com

Their debut throbs like the Strokes with cross-eyed parents, their songs gritty and economical, their drummer nasty in all the best places. – Blender

The songs are so generic that the only thing left at the record’s conclusion is the feeling of how hollow and insubstantial the whole thing is. –  PopMatters

Using and abusing passionate gospel, country sweetness and filthy guitar licks, the Kings Of Leon are the kind of authentic, hairy rebels the Rolling Stones longed to be.
– The Guardian

Aha Shake Heartbreak (2004)
Now the melodies are sharper, the scissor kicks are higher and the grooves are, er, groovier.  – E! Online

In an effort to escape their pigeonhole, the band are back, with haircuts and a second album that is quite different from the first. It takes you on an interesting journey. Caleb’s rasping chords… but he remains tuneful and purveys strong emotion whether exhilaration, tenderness or pain. – BBC

It would seem from the evidence presented here that [King Of Leon] are intent on rebuilding themselves from scratch, drawing on whatever wild and wonderful influences they’ve tripped over in their race to live five lifetimes in every day. – NME

Because Of The Times (2007)
An epic wide-screen movie of a CD and the band’s best to date. – Entertainment Weekly

The need for rock ‘n’ roll bands to declare war on clichés has been evident for ages. But who’d have thought a band in tight jeans and sunglasses would wind up leading the charge? – Dot Music

Because Of The Times cements Kings Of Leon as one of the great American bands of our times. – NME

Only By The Night (2008)
Through headphones or computer speakers, Caleb’s echoey vocals just don’t ring credible. Their Black-Crowes-go-new-wave choruses are exciting enough, but they feel unearned after tiresome, oversung verses. – Village Voice

The record is a sluggish mess of sweeping guitars, not unlike what you might hear at a high school talent show. – Now Magazine

Frontman Caleb Followill wails forlornly about cheap thrills and true love while his two brothers (and a cousin) bash out spooky, raw-edged riffs that rarely go where you expect them to. – Entertainment Weekly

On their fourth album, the Kings Of Leon still rule with a messy hand, applying rough magic and blurry, slurred imagery to their swashbuckling rock. – Spin

Only By The Night is long on astral, arena-ready largeness, with blippy keyboards, droney guitars and whoa-oh-oh backing vocals. – Rolling Stone

Come Around Sundown (2010)
Too many of these tunes are rehearsal room grooves in search of a hook. – NME

Come Around Sundown is musical wallpaper. –  Drowned In Soundt

If you’re a die-hard Kings Of Leon fan Come Around Sundown will upset you. Keep what you love about this band close to your heart and ignore this album, you’ll thank yourself in the end. – Delusions Of Adequacy

Come Around Sundown is the sound of them trying to wrestle its relationship with fame back under control. – Q Magazine

Kings Of Leon seem to have forgotten how to rock. It’s as if the quartet wanted to become the next U2 so badly that it lost sight of how it got here in the first place. – Chicago Tribune

Mechanical Bull (2014)
When you’ve sold more than 11 million records worldwide, in a career spanning over a decade, then you’ve probably earned the right to call your sixth studio album whatever you see fit to. But did none of the executives at RCA raise concerns when Kings Of Leon said they would call their next record Mechanical Bull? It’s not great, is it? – Jeremy Allen, The Guardian

The record sees them only half-remembering how fun it is to make an album and remaining frustratingly wary of letting totally loose. – NME

A strong, engaging return to form, Mechanical Bull is made to ride. Strap in and enjoy. – Clash

News
Nightlife
Things to do
EDITOR’S PICKS
13 Sheikh Hamdan-approved restaurants in Dubai
READ MORE
Dubai brunches temporarily banned in new preventative measures
READ MORE
12 upcoming Dubai mega-projects we can't wait for
READ MORE
16 of the best beach bars in Dubai for sundowners
READ MORE
MOST POPULAR
Throwback: Check out these photos of the UAE's first hotel
5 empowering ways to celebrate International Women's Day in Dubai
There's a new luxury lifestyle magazine for men in the UAE
Nails and cocktails: Inside Dubai's new licensed nail bar
22 of the best places to get vegan and vegetarian food in Dubai
YOU SHOULD CHECK OUT
Our website uses cookies and other similar technologies to improve our site and your online experience. By continuing to use our website you consent to cookies being used. Read our privacy policy here.