What’s On reviews Relatively Speaking at DUCTAC, Mall of the Emirates, the Dubai Drama’s Group latest production. Find out how to get tickets here.

Dubai Drama Group (DDG) is closing its 2013/14 season with an adaptation of Alan Ayckbourn’s much loved comedy, Relatively Speaking.

Set in England half a century ago, the story follows a young couple, Greg (Jonathan Siklos) and Ginny (Diana Duff), in the midst of a relationship falling down around them. Seemingly oblivious to the bunches of flowers and boxes of chocolates that lay strewn around the small ’60s-styled bedsit, Greg proposes and is then dismayed when he is told that he cannot visit Ginny’s ‘parents’ with her that afternoon. The reason becomes clear when Greg decides to visit anyway, arriving to discover Sheila (Brook Butterworth) and Phillip (Bryan MacKenzie), an unhappily married couple, with whom Ginny is involved in a love triangle.

Sounds confusing? From the synopsis we thought so too.

Fortunately, any doubts we had about this play quickly proved unfounded. In fact, Relatively Speaking is an utterly charming, surprisingly heart-warming, and fast-paced romp through mistaken identity, crossed wires, and is, at points, laugh-loud-loud funny – all the things that make comedies so much fun. 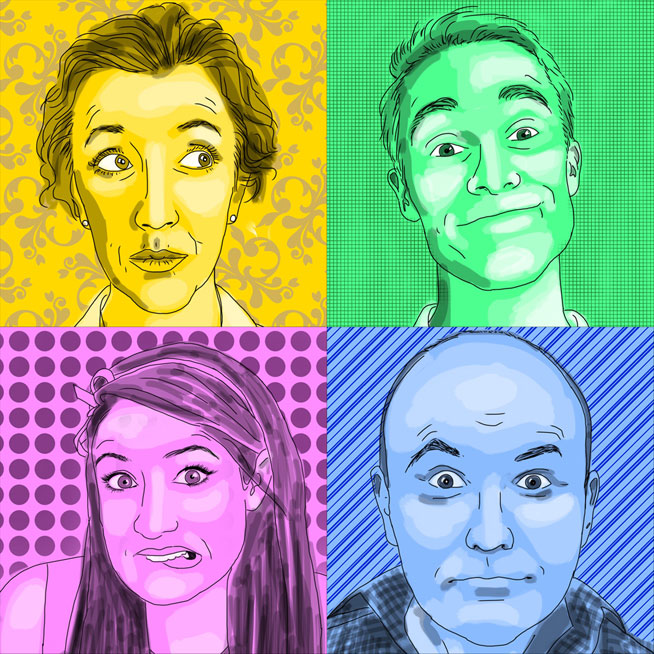 At the helm is Aussie director, Jennifer Cooper, whose full-length production debut with the Dubai troupe plays to the strengths of an international and talented cast, all the while staying true the style and genre of the classic tale.

Carrying the performance are Duff as the headstrong Ginny, who possesses the right mix of maturity and innocence to play the youthful character with flair, and Siklos’ turn as Greg, the utterly adorable yet completely naïve boyfriend. It’s a welcome balance.

Stars of the show however come from the older couple played by Dubai drama veterans Butterworth and MacKenzie. Without giving too much away, the pair spend much of the play engaged in a ‘merry war’, both suspecting the other of having an affair, which generates a wonderfully witty sparring session on stage. Butterworth’s timing in particular is superb, winning much of the laughs throughout and MacKenzie’s portrait of the bullishly patronising Philip makes the duo a real force to be reckoned with. Good stuff indeed.

So, is it worth checking out? Absolutely – if only to see some of Dubai’s strongest talents flaunt their art. Relatively Speaking has got all the charm and intimacy of a community-run play with a solid professional touch. Go check it out.

Relatively Speaking is playing at the Kilachand Studio Theatre, Ductac, Mall Of The Emirates until 14 June 2014. Show starts at 4.30pm and 7.30pm. Tickets are Dhs90. dubaidramagroup.com

Culture
News
Theatre
Things to do
EDITOR’S PICKS
Here's the full list of UAE public holidays in 2023
READ MORE
23 incredible things to look forward to in the UAE in 2023
READ MORE
Hidden gems: 10 UAE desert pop-ups to discover this winter
READ MORE
Where to travel in 2023: 10 new flight routes from the UAE
READ MORE
MOST POPULAR
The best new breakfast spots to try in Dubai
Inject some culture into February with 14 cool exhibitions in Dubai
Plans unveiled for a scenic new 93km cycle highway in Dubai
A free full moon beach party is happening in Dubai this weekend
42 parks with outdoor barbecue facilities in Abu Dhabi
YOU SHOULD CHECK OUT
Our website uses cookies and other similar technologies to improve our site and your online experience. By continuing to use our website you consent to cookies being used. Read our privacy policy here.