EXCLUSIVE: David Blaine - "I've never done a show like this before"

What’s On speak exclusively to David Blaine in Abu Dhabi ahead of his Abu Dhabi Summer Season show at Emirates Palace. Get tickets. Find out about the show.

David Blaine famously encased himself in a block of ice for 63 hours, and lived in a Plexiglas box suspended above London for 44 days – and now he’s performing in Abu Dhabi for the first time. The New Yorker comes with a reputation for being a little bit, shall we say, bonkers, but very few performers have amazed audiences quite like Blaine.

He was first introduced to tricks by a street performer on the New York Subway when he was four years old. He went on to be a regular at drama school as a kid and starred in commercials and TV soaps, before sending a tape of his card tricks and illusions to ABC. They loved it, and he recorded his first show Magic Man in 1997. The rest, as they say, is history.

Now it’s time to try and work out if your eyes are playing tricks on you when he appears in the nation’s capital. But before the illusions begin, he sat down What’s On and revealed what’s in store at his Emirates Palace shows…. 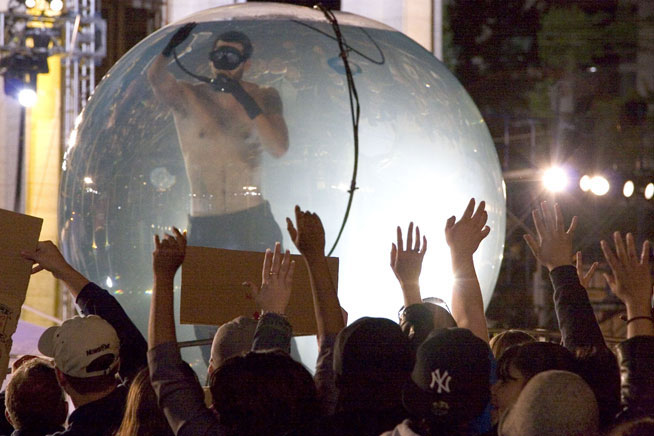 What’s going to make these shows so special? It’s about all the things that could go wrong – from drinking the gallon of water where I then put out a fire, from the ice pick through the hand to the water tank where I hold my breath. All of this will be combined into one night’s performance and if I can pull this off, I am going to keep adding to the show, so it will become a true night of incredible stunts.

And the show is called Real or Illusion, so how real is it? I know a lot of people think what they’re seeing is illusion so we’ll be getting people up from the audience to examine it and check that it’s real.

So that’s three very risky stunts on one night. Isn’t that little dangerous? It’s very experimental. We will see what happens. There will be new illusions also in the show, but to me the part that is most interesting is the things they will see that are real. Normally when I do these things, I do them on individual days, so I’d do the water spout trick with fire on one day. Then I’d do the ice pick a couple of days later and the breath hold a few days after that.

So are you worried? I am concerned about my body, yes. We rehearse but we never actually do the stunt: I never hold my breath, or use the ice pick or drink the gallon of water. It’s mind rehearsed. If I can pull it off it really sets the bar high. It means I can do this as often as I want. But this show could shut me down; I’ve never done a show like this before. It’s being live tested in front of an audience, which really makes it exciting.

Have you done much training for these shows? I had to drop about 30lbs to get into top condition so I can hold my breath. It’s very improv, make-shift, it’s not like a controlled environment. The audience gets to interact with me. They can make sure it’s real and that there’s water around me – they can even get in the tank with me.

What, for the whole stunt? I don’t think anyone will want to do that! Also, they might take over the show.

How does your family feel about you risking your life on a regular basis? Luckily my daughter is still young enough she doesn’t understand conceptually what is happening. Hopefully I’ll be old and done with all this when she’s old enough to understand the process.

Will you get to explore the capital during your stay? We have three nights so I think we will have time to explore Abu Dhabi, so I can’t wait. We’ve done a lot of research on visiting here. I think people are overthinking it because I’m being told we can’t call the show magic. But this is a very different show. 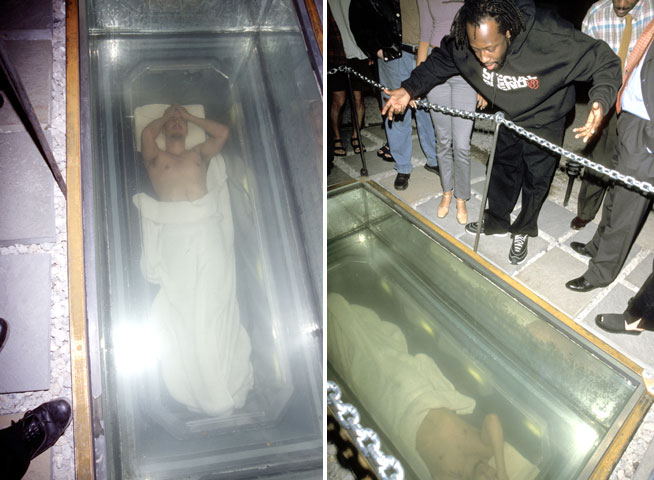 Is there a theme to the show? It’s semi-biographical. I will do things with cards and explain what led to what. The irony of an illusionist is to go up there and be totally truthful, as my job is all about deception, but that’s what this is. This is the seed of the tour and you guys are the first ones to see what I am working on.

Do you still get excited when you learn a new trick? It’s about combination of things: the actions, leaning something new, the fixations, seeing something that looks like an illusion and I’m trying to discover how to actually do it. It’s logic, science and maths all combined.

Are you impressed by other magicians and wonder how they do their tricks? Most of my friends are magicians and we all brainstorm, but once in a while someone comes up with something and you just have to take your hat off and you’re blown away. That somebody is able to do something so manipulative and so dexterous. There’s a lot of guys like that who you wouldn’t know like that who just blow my mind. Yann Frisch, for example, but his act is better seen live than on YouTube. When I watch him, I can’t even comprehend how he works out something so mind blowing.

You’ve performed to many celebrities, do you have a favourite? One of the most emotional moments for me was Stephen Hawking. That was one of my most exciting moments. As I’m doing magic, I watch people’s reactions. I pay close attention internally to people’s reactions. When Harrison Ford told me to get out of his house (below), I was jumping up and down inside with excitement.

Culture
Theatre
EDITOR’S PICKS
UAE holiday dates announced for Eid Al Adha
READ MORE
Emirates extends suspension of flights from India to UAE again
READ MORE
Coming soon: Everything we know about Ain Dubai so far
READ MORE
Khorfakkan set to open new tourist attraction 580 metres above sea level
READ MORE
MOST POPULAR
It's Dhs350 to brunch, stay and play at the What's On Lock In this weekend
UAE petrol prices will increase again in August 2021
Exclusive interview: John Cena on his role as a 'douchey Captain America'
The stunning SLS Dubai hotel launches a luxe spa-cation
Pics of the week: Your best photos of the UAE
New entertainment venue Cue Dubai launches Friday brunch
YOU SHOULD CHECK OUT
Our website uses cookies and other similar technologies to improve our site and your online experience. By continuing to use our website you consent to cookies being used. Read our privacy policy here.