How to be a stand-up comedian

What’s On enlists Khaled Khalafalla for advice on how to be a stand-up comedian. He’s in UAE for the United Nations of Comedy at Emirates Palace, Abu Dhabi.

There’s not enough live comedy in Abu Dhabi in our opinion, so two nights from United Nations of Comedy this weekend at Emirates Palace goes some way to putting that right.

But have you ever fancied getting on stage and telling a few jokes yourself? Khalafalla, who lives in Melbourne, Australia, has been on the circuit for three years since winning a competition back home Down Under, and exclusively sat down with What’s On to give some advice to wannabe comics.

Content is just as important as delivery
It’s a dangerous swing between both content and the craft. Timing is influenced by ego and yourself and that dictates the swing between the content and your timing. It often depends on the crowd. It’s about the jokes I am trying to relate to them, and what they are receiving. If the content is good, then you just have to work on the timing. If I get a giggle for something I believe deserves a bigger laugh, then I’ll give it more stage time.

Pay attention to the local culture
As I get better at comedy, I like to think I can tailor my set to different cultures, but I can’t always as much as I’d like to. I visit different cities and create a new five-minute set based around the local scene, landmarks and icons. But sometimes that can be just reduced to, ‘gee, he has an accent’.  When I arrive at a new place, I create a mindset that allows me to be vigilant. So when I arrive in the UAE, I will see what I can pick up from people and be a very good listener. When I go there, I won’t have jokes in mind, nor will I go looking for them – I will be listening to everything. Then I will create jokes back in my hotel room.

Make sure you read your audience
If you don’t know your crowd well enough, they can turn angry. Culturally sensitive material is always erring on the side of anger. Unfortunately, you have to fail nine times out of ten before you hit that gem. Then you stay consistent with that gem.

The toughest crowd is often your home crowd
I’ve travelled around the world but I always think Melbourne audiences know what’s coming. A joke is all about the reveal. I get anxious and think they will know the punch line. Then I want to change it, then I overshoot it, and then I spend 10 minutes in damage control trying to recreate a punch line I should never have changed. When I went to New York, a place I believe is the pinnacle of stand-up culture, I was sharing line-ups with people a lot better than me. But that’s where I did my best performances – they had never seen me and had no idea what was coming. So I’m excited about performing in Abu Dhabi for the same reasons.

You need four things to deal with hecklers
Patience, positivity, truth and love. If I see someone heckle me and I’m impatient and confront them too soon, I risk losing the crowd. If I speak in a tone that shows anything but love for the audience, I risk losing them. Everything to do with a heckle is about having your pulse on the whole audience, not just the heckler. And if I don’t give the heckler an out so they can enjoy the rest of the show, I will lose the crowd. I’ve failed a lot when it comes to hecklers, but it makes a good video when you nail a comeback. But my advice would be to avoid interaction with them if you can. If someone is talking in the front row, I will let them talk for a very long time and let the audience think the same as me before I make my move.

Never, ever steal a joke
It’s the ultimate taboo. It’s something I fear – If I admit I fear it, then I admit to the idea that it’s possible, that I might accidentally steal something. But if you value improv and stream of thought, you sometimes submit to thoughts that you’ve picked up around you. You have to step away from ideas that belong to other comedians. 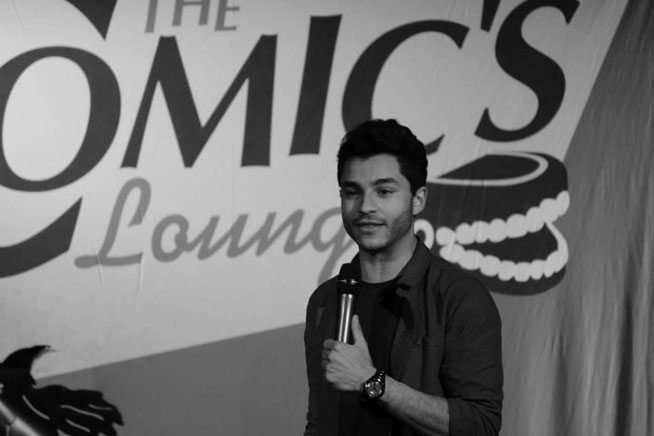 You have to work hard
The moment I nail a formula for practising is the moment I go downhill. I’ve recited lines in front of the mirror and I sometimes do gigs I know won’t go down well, because I think that’s the hard work I need to do to get better. But at other times, I shun away from that and ideas grow in my head unpolluted and that’s how I grow in confidence when I don’t perform. My preparation for the UAE has been doing the club circuit here in Australia. I’ve been touring for seven months. But recently, I’ve taken three weeks off and have been working on timing in front of the mirror.

Know your weaknesses
For me, it was always arrogance. It was getting blessed with opportunities early. My first performance was in front of 2,000 people and I had this idea in my head that I was only ever going to perform in 2,000-seat arenas. When people offered me less, I refused. But I was offered opportunities time and time again and trampled my way to the top. But remember one thing – the people you disrespect on the way up won’t catch you on the way down.

Be prepared to fail
Because you will, while you find consistency in your act. Being consistent makes me happier and a better comic. But whatever happens, don’t quit because you are meant to fail a lot. I am where I am now because of many, many failures

Culture
News
Theatre
Things to do
EDITOR’S PICKS
Here's the full list of UAE public holidays in 2023
READ MORE
23 incredible things to look forward to in the UAE in 2023
READ MORE
Hidden gems: 10 UAE desert pop-ups to discover this winter
READ MORE
Where to travel in 2023: 10 new flight routes from the UAE
READ MORE
MOST POPULAR
W Abu Dhabi will host a second edition of its sustainable Looped In menu
The UAE law changes on marriage, divorce and child custody to know about from February 1
5 fabulous new Dubai hotels to check-in to
Pics of the week: Your best photos of the UAE
Dhow & Anchor has got you covered every day of the week
YOU SHOULD CHECK OUT
Our website uses cookies and other similar technologies to improve our site and your online experience. By continuing to use our website you consent to cookies being used. Read our privacy policy here.