Street Art in Dubai: guide to artists, galleries and style with Sya One

What’s On team up with Hype to get a lowdown on street art in Dubai with Sya One, including the artists, graffiti galleries and other galleries in Dubai.

Words by Sya One

It seems like there are new galleries opening up on a weekly basis throughout the region, but sadly most fail to push the envelope as far as shows and exhibitions are concerned. However, one that is fighting through the landscapes and portraits to deliver fresh and exciting art is the new Street Art Gallery, just off Jumeirah Beach Road.

Graffiti and street art is slowly becoming known and recognised in the UAE, and with the welcome addition of Street Art Gallery more people will hopefully soon learn that there is more to this art form than Banksy.

Exhibiting works from the likes of Pursue, London Police and Tilt alongside some very talented local artist and with even a little bit of exhibition space for myself and my better half Steffi Bow, it’s well worth a look and all the pieces are for sale. 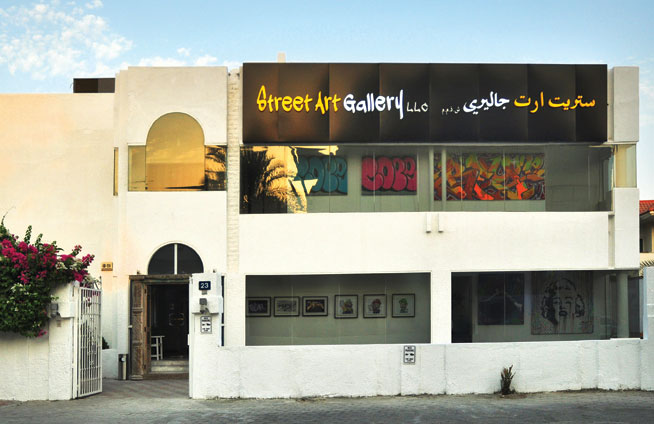 It’ll soon be hosting a show of works from Cope2, one of the legends in the worldwide graffiti scene. Hailing from New York City, Cope 2 has been leaving his mark around the world for decades with his distinctive throw ups and pieces. The show starts on September 10, so mark that date in your diary and be sure to check it out.

Further afield, if you’re interested in graffiti in any way – even a little curious – then there are two books (below) crammed with just about everything you need to know about the history of this art form. Written and photographed by Henry Chalfant, Martha Cooper and James Prigoff, Subway Art and Spraycan Art cover nearly every aspect of graffiti and make for great coffee table books too. 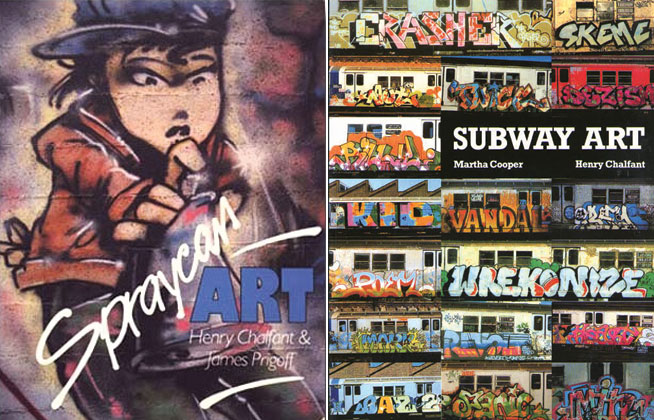 Subway Art is the first book to be released on the subject nearly 27 years ago and expertly documents the rise of New York subway graffiti via writers like Dondi, Seen, Iz The Wiz, Min One and Quik.

Then came Spraycan Art, which covers the world of graffiti from the Americas, Europe and beyond. It covers the wall painting side of things with the likes of Mode 2 from London, Shoe from Holland, Blade and Lady Pink from the US and many more all featured.

If you can find them buy on the spot as they are a must for any art book collector. There’s a 25th anniversary version of Subway Art available on most online bookstores but I’d advise hunting down the originals.

Watch a video from Art Night DIFC afterparty, shot by the artists themselves.

IN THE CAN… MEET HAS ONE
Has One hails from Cyprus and has now set up home in Dubai, bringing his unique style of graffiti with him. After running a graffiti store back home, he did stints in London and Germany before landing on these shores. Here he is on the firing line for a few quickfire questions…

What brings you to Dubai? I moved to Dubai for work, sun and playtime. Tax-free living isn’t too bad either.
Where does the tag Has One come from? My childhood nickname was Has and when I started doing graffiti I got lazy and just used the same name.
Describe your style… I would describe my murals as new school wild style, but I also dabble in the bubble style lettering when I’m bored.
Favourite spots to paint? In Dubai, it’s always good fun painting on your graffiti wall at SyaBowville and outside of the UAE it would have to be Athens in Greece.
Most random spot you’ve painted? Gate 9 hooligans’ headquarters in Nicosia, Cyprus.
How would you describe yourself in five words? Artistic, motivated, workaholic, world traveller. 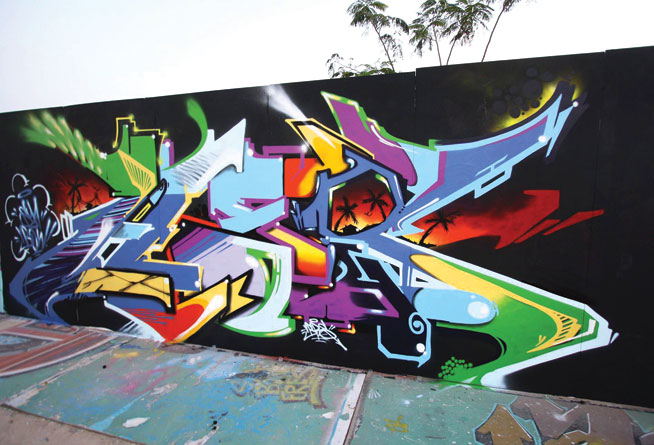 Check out Has One’s work at hasone.tumblr.com

Style Master
Here from year dot, Frez was and still is the top graffiti writer in the Middle East. Many may claim to be the first to paint this hallowed land but Frez is the true originator and was the first to put can in hand and paint to wall nearly a decade before anyone else in the region. An elusive and very chilled character, he’s one of the most stylish writers and bring his distinctive style and magic to any wall he touches with fresh letters and banging fills. The undisputed style master of the UAE, nuff respect.

Take Cover
You’ll find Gucci, D&G, etc, all over Dubai but frankly I find those labels overpriced and boring. If you’re into brands such as The Hundreds, Stussy, Crooks and Castles, Rebel 8, etc, you’ll have your work cut out finding them in the region. So let me make life a little easier for you… Online store Bunker Clothing has been flying the flag for urban (I hate that word) apparel in Dubai for a while now, so if you need your fix of rare sneakers, hats, T-shirts and the like, hit them up at bunkerclothing.com or facebook/bunkerclothing

Future Sounds
Something for your aural pleasure… Started by drum ‘n’ bass don Doc Scott, 31 Recordings has been at the forefront of the scene for a good many years now. With signings such as Escher, Om Unit, Paragon and the like, 31 is taking drum ‘n’ bass on a journey into the future with raw rolling beats and dark melodies. Catch Doc Scott’s Future Beats radio show on soundcloud.com/docscott31. If you love drum ‘n’ bass you need to get on this.

Sya One is a graffiti artist. Find out more at dubai-graffiti.blogspot.com and facebook.com/sya.bowgraffiti 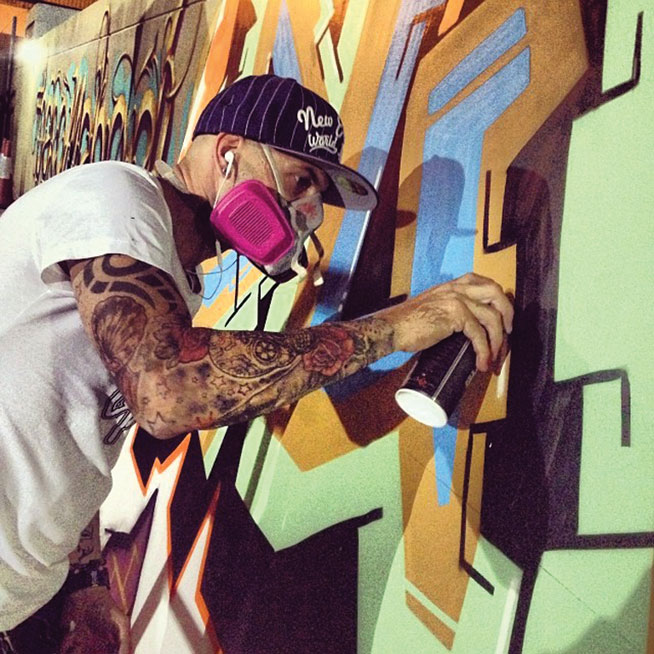 Bursting with essential nightlife in the Emirates, it is at the cutting-edge of the UAE’s burgeoning club and music scene. The region’s only dedicated weekly music magazine, Hype is at the heart of the action and in the middle of the dancefloor. Packed with all the latest clubs, events and local music news, interviews and features, it’s the only magazine you’ll need for a great night out or the lowdown on that must-do festival, gig or club.To find out more, visit the Hype Facebook page.

Or you can download the digital edition by clicking right here.

Art
Culture
Nightlife
EDITOR’S PICKS
13 Sheikh Hamdan-approved restaurants in Dubai
READ MORE
Dubai brunches temporarily banned in new preventative measures
READ MORE
12 upcoming Dubai mega-projects we can't wait for
READ MORE
17 of the best beach bars in Dubai for sundowners
READ MORE
MOST POPULAR
President Sheikh Khalifa releases 439 prisoners ahead of Ramadan
100 million meals: Sheikh Mohammed launches the largest campaign of its kind
Social by Heinz Beck transforms from fine dining to fun dining
Where can Dubai residents travel? Check out these 14 destinations
Etihad to give away 50,000 prizes as part of UAE jubilee year celebrations
YOU SHOULD CHECK OUT
Our website uses cookies and other similar technologies to improve our site and your online experience. By continuing to use our website you consent to cookies being used. Read our privacy policy here.