What’s On meets DJ Raxon, resident DJ at 360 bar in Dubai for Audiotonic sessions on Fridays. He’s performing at Level 41, Media One Hotel in September.

Abu Dhabi born DJ Raxon has been playing electronic music for over a decade and is the resident DJ at 360° during the Audiotonic sessions on Fridays from 5pm to 3am. You can catch him playing alongside long-time Audiotonic collaborator DJ Mr Mr as part of the Level 41 Summer Series through September at Media One Hotel. 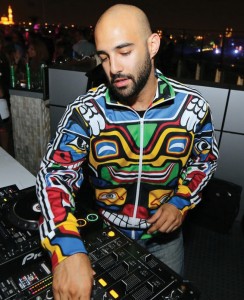 How did you get started in DJing? I’ve always been hugely into music – even in high school. I was the guy that used to DJ at everyone’s house parties. My first ever gig was a warm up set in Trilogy, and my favourite place to party was Peppermint [now Cavalli Club]. In 2006, I heard DJ Mr Mr playing a live set on Radio One from 360°. I went to check it out, gave them a few of my demos, and the rest is history.

How has the house music scene changed since then? Back then, the nightlife was more about mainstream hip-hop and R ‘n’ B. Now there’s a much bigger house scene – but there’s definitely room for more growth.

Who are the local DJs we should be keeping an eye on? This city is full of new, upcoming DJ talent. Two DJs that you should definitely be looking out for are Rod Lee Winters and Markii.

What’s your favourite Dubai venue? I hate to sound biased, but I’d have to say 360°. Audiotonic sessions start at 5pm, so you’re looking at ten hours of good house music. Add those sunset views, and it all makes for a perfect Friday night.

Can you recommend a hidden gem of the Dubai nightlife scene? There’s a really cool house music night happening on Wednesdays right now at Vanity Club in the Al Murooj Rotana [Sheikh Zayed Road, near World Trade Centre]. Check it out.

What can we expect from your shows at Level 41 this month? A cool, raw vibe, concrete floors, bare walls – it’s a different experience to the usual clubs, and that’s what makes it great. Mr Mr and I have been playing together for a decade, so there’s a special chemistry behind the decks. We have a good time, and so does our audience. Music-wise, we try not to play the usual chart stuff, because anybody can do that – instead, we like to keep it fresh.

What are you most looking forward to for the new season? Definitely the opening of Pacha Ibiza Dubai [set to open its doors at the end of October in Madinat Jumeirah]. I believe that venue is going to be a game-changer for Dubai.