Dubai’s surfers rally together to save Sunset Beach

What’s On has details of a petition signed by Dubai’s surfing community to stop an expansion of a hotel on the marina at Sunset Beach, a popular surfing spot in Dubai.

While Dubai may not be the ultimate surfers paradise, our desert city has developed a surprisingly strong surfing community, who rely on the slight wind swells that make their way through the Arabian Gulf. But, due to expansions and developments, Dubai’s surfing options have been narrowed down to one beach.

That beach is now also under threat of becoming dry-docked. 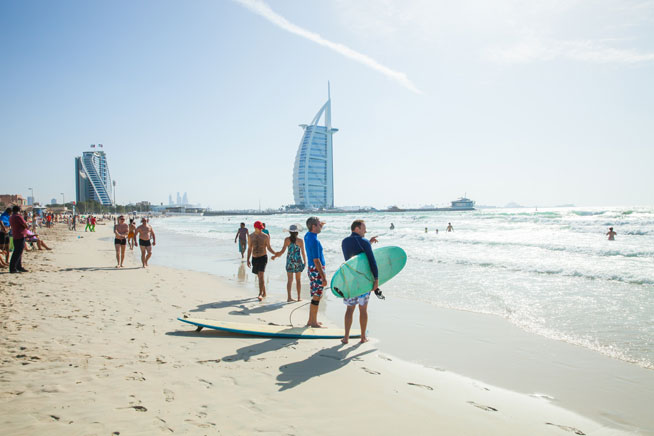 According to local reports, more than 1,500 surfers and beach dwellers in Dubai have signed a petition to halt the expansion of Jumeirah Beach Hotel’s marina. Some residents are concerned that the project proposed for Sunset Beach will narrow the beach for the public and reduce any potential swells for surfers – a huge blow for the community.

“It’s the last remaining beach in Dubai where we can surf,” explains Carl de Villiers, Owner of Surf Shop Arabia & Ignite Surf School UAE. “When there are waves, Sunset Beach is where you’ll find the majority of the surf community. It’s also been our home for our Surf School for the last few years so it’s super tragic that we’re losing our favourite surf spot.”

Surfing has rapidly gained interest in Dubai with a number of surf schools popping up in the last five years. Shops have even started stocking boards, dedicated surf shops have popped up around the city and a Surf Cafe is slated to open before the year’s out. There’s even the Middle East’s biggest surfing competition – ESSA Sunset Open, that takes place annually.

“Unfortunately surfers will need to travel to other emirates to surf which is not such a huge problem but for that quick before/after work surf that we all live for, it’ll be all but impossible.”

The petition is expected to be delivered to the relevant authorities very soon.

News
Outdoor
Sport & Fitness
EDITOR’S PICKS
Ramadan in Dubai: 50 iftars to try
READ MORE
Where can Dubai residents travel? Check out these 14 destinations
READ MORE
Rumours, facts and reveals: New Abu Dhabi bars and restaurants
READ MORE
UAE announces reduced working hours for Ramadan 2021
READ MORE
MOST POPULAR
There's a 30 per cent sale taking place during the long weekend on LegalHomeDelivery.com
Pics of the week: Your best photos of the UAE
Here's why you need to visit Mimi Kakushi's new Friday lunch
New films to watch in cinemas this week: May 13 to 19
Torno Subito's new lunch menu offers a quick mid-week vacation
YOU SHOULD CHECK OUT
Our website uses cookies and other similar technologies to improve our site and your online experience. By continuing to use our website you consent to cookies being used. Read our privacy policy here.