What’s On team up with Hype to give away a Pioneer turntable as part of the news you can soon buy vinyl in Dubai at Flipside, a new record store in Dubai.

Dubai’s dance scene is growing up. At first, it was only big name trancers, over-the-hill prog stars or pop-dance DJs that frequented hotel clubs and shiny bars. But now that something of a scene has been established, local heads, ex-pats, students and international visitors are increasingly thirsty for more. It’s for that reason that quality drum ‘n’ bass nights now have a strong hold in the city and underground house and techno prospers at connoisseur parties like Audio Tonic, Analog Room and Groove On The Grass.

What the city still lacks, though, is something of a creative hub – a place where music fanatics, wide-eyed youngsters and experienced veterans can all rub shoulders, exchange music and dream big. It is this sort of DiY community space that will accelerate Dubai’s music scene and ensure it lasts long into the future. Such a place can take many forms – be it a DJ or production school, a local radio station or that most venerated meeting place of all, the record shop.

Halcyon Records, NYC
You can always guarantee new goodies, and forgotten gems, too.  They also have live in-store sessions.

In 2014, vinyl is back in a big way – sales are up, people are dedicated to the form and every week gorgeously designed new packages are released alongside hotter-than-hot hand-stamped and limited techno twelves, recently unearthed and reissued old disco gems, and more besides. DJs, too, are ditching USBs and CD decks in favour of good old tactile vinyl and Pioneer have even launched their own new vinyl deck in response to the worldwide revival.

There has been, to our knowledge, but one independent record store in the city before, OHM, now sadly closed (along with many others around the world) after the digital revolution took over.

In the coming months, though, one record obsessive and dance music lifer, Shadi Megallaa, is going to right that wrong. “Most important to me is the physical aspect of vinyl collecting,” says the super amiable character in a stylised American drawl.

Phonica Records, LDN
Phonica has an amazing selection and  very friendly, knowledgeable staff. Their mailing service is great, too.

“The memory of buying a record stays with you: where and when you bought each one, your girlfriend at the time; records have a certain smell and you don’t risk losing them like you do with a hard drive crash. Also, you keep discovering new music in your vinyl, like a new B-side or whatever, as your tastes change. It’s like having new music within your old music, and you don’t get that with digital files.”

Egyptian born but an on/off resident of Abu Dhabi for most of his adult life, Shadi has travelled the world and lapped up musical influences from myriad different scenes. As well as now running his own label Ark To Ashes, he has worked in record shops and has been buying from them since pre-internet days when he had to call up the shop and have samples played down the phone. “My phone bill was often more than the bill for records,” he laughs.

But now the shoe is on the other foot, because Shadi – a resident DJ at Analog Room and welcome guest DJs at many other parties around the region – is set to open up his very own record store in Dubai. Plans are afoot and gathering pace as the dream is being worked into reality.

It’ll be called Flipside and, frankly, Shadi is exactly the sort of person you want to deal with in a record store: he is disarmingly friendly and easy to speak to, is filled with unwavering passion but never lectures, and is as keen to learn from those he comes in contact with as he is to impart some of his long acquired musical knowledge.

Shadi first came into contact with dance music though a friend. At first it was happy hardcore, drum ‘n’ bass, Ministry of Sound releases, progressive house and Sasha and Digweed he was into. Then he moved to Kansas in America to follow in his father’s footsteps by studying architecture, where he had to “eat, sleep and breathe archi-torture”, as he puts it. Just before he left, though, he bought his first decks.

“I bought ten records – stuff like Sunscreen’s Perfect Motion and some awful Paul van Dyk – and just played them over and over to learn my trade. People over there were listening to really incredible house music though, stuff like Derrick Carter, Mark Farina, really good West Coast stuff that I came to later.”

After returning to the UAE then moving to Switzerland for 18 months to DJ and make music, he eventually came home once again, totally skint, so worked for his father for two years until he had enough money to up and leave for New York, all the while amassing an ever greater record collection. In that time he partied at places like the legendary Twilo and worked in New York’s famous Halcyon store alongside friend, DJ and Blackmarket promoter Taimur Agha. In these years, though, opening a record store was nothing more than a dream for Shadi.

“It was actually my parents’ idea first, because they saw I wasn’t happy in what I was doing. When I started thinking about it, first of all I didn’t know who would actually buy records. Most DJs in town don’t really play records, but there are lots of other people who want to buy them, not just house and techno ones either. It was after starting my label that I really got the confidence to give it a go.”

At this point, Shadi has already contacted the major distributors and has found a location that will allow him to put on parties as well as sell waxy black. “That’s one of the main things – I want parties, live shows, a coffee shop, a radio show and a screen to show documentaries on each week, so the premises has to be big enough for all that. It has to be a real community place and has to have a great sound system. There are various music scenes in Dubai but there’s no real community. We need a community hub. I’ll also sell tickets, maybe stock some decks, and music-wise it’ll cover jazz, blues, drum ‘n’ bass, dub, calypso, house and techno, funk, soul, some rock and indie, both new and old stuff.”

Although he remains resolutely laidback throughout the interview, it’s clear Shadi is no idle dreamer. Instead he’s a restless soul who always seems to be looking for a challenge. Opening his record shop certainly is that, and if you want to get involved – either working in the shop, offering your collection for sale, making requests on what he should sell or anything else – he is ready and waiting for you to get in touch at flipsidedxb@gmail.com.

Flipside wants to hear  from you. This is your chance to help shape Dubai’s cool new vinyl emporium. All you have to do is fill in the form below and you will be in with a chance to win the brand spanking new Pioneer turntable. 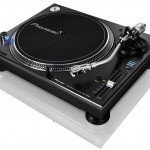 Pioneer aim to set new industry standard for the vinyl turntable
When Technics discontinued their SL-1200 range in 2010, it really looked like the end for vinyl DJing. Big guns from Carl Cox to Fatboy Slim had traded in their vinyl for more travel-friendly formats like USB sticks and CDs, and it looked like the 35+ years in which the turntable had been at the heart of countless countercultural movements, from hip-hop to dubstep, had come to an end. But a growing number of niche record labels are eschewing digital formats to release on vinyl only, and a new generation of DJs has bought into vinyl fetishisation as keenly as those before them. It’s no surprise, then, that Pioneer has made a bid to fill the void left by the Technics SL-1200 range.

The Pioneer PLX-1000 is a precision-engineered professional turntable that draws on the best club decks of the past but with some next-generation improvements, including a high-torque direct-drive system and multi-pitch control. At first glance the PLX-1000 looks like a serious contender for the new industry standard turntable. It’s due to hit these shores soon and we’ll bring you a full review when it does.

Keep up to date with all things Pioneer at pioneer-mea.com and on Facebook and Twitter via PioneerDJMEA

Competitions
News
Nightlife
EDITOR’S PICKS
UAE holiday dates announced for Eid Al Adha
READ MORE
Another update: Emirates extends suspension of flights from India to UAE
READ MORE
Coming soon: Everything we know about Ain Dubai so far
READ MORE
Khorfakkan set to open new tourist attraction 580 metres above sea level
READ MORE
MOST POPULAR
Feast on the best unlimited chicken wing deals in Dubai
It's Dhs350 to brunch, stay and play at the What's On Lock In this weekend
6 great things to do in Abu Dhabi this week: July 25 to 28
6 fun things to do in Dubai this week: July 25 to 28
10 of the most expensive properties for sale in Dubai right now
YOU SHOULD CHECK OUT
Our website uses cookies and other similar technologies to improve our site and your online experience. By continuing to use our website you consent to cookies being used. Read our privacy policy here.