Fancy catching some fish in the deep sea, just for the halibut?

What’s On goes deep sea fishing in the Western Region, UAE. Find out about fishing tours from Dubai and Abu Dhabi, how to hire a boat, and fishing rules.

“You’re going to need a bigger boat.” A catchphrase made famous by Roy Scheider in Steven Speilberg’s 1975 classic shark movie Jaws. These words were playing in What’s On’s brain as we took our first-ever deep sea fishing trip in Abu Dhabi’s Western Region.

The Danat Jebel Dhanna Resort, near Sir Bani Yas Island, is one of several hotels in the area that organises expeditions that are just as much fun for beginners as they are for seasoned pros.

A maximum of four guests can head out to sea (we opted for a three-hour package, although six-hour excursions are also available) on a trip that starts with a quick paddle into the ocean before clambering aboard a small, twin-engine craft boat, which is your base while you hook some scaly friends. It’s vital you take a hat with you, as there aren’t many hiding places from the sun once you’re out on the ocean waves. 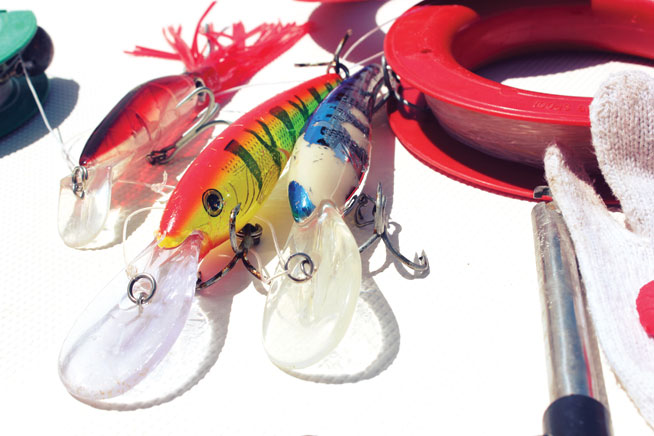 The journey out to sea is a fun one, not only because feeling fresh air battering your face as the boat bounces off the waves is an exhilarating experience, but because there’s plenty of spectacular scenery to admire: on one side, the natural beauty of Sir Bani Yas Island, but look the other way and gawp at huge shipping ferries and cranes – a rare glimpse into the industrial side of life in Abu Dhabi.

For novices, this is a particularly feel-good trip, as you don’t need to be a cod whisperer to hook yourself a prize. Plastic bait are attached to the end of thin, plastic cord and are thrown into the ocean. The waiting begins, but it doesn’t take long before you get a bite. You’ll find several pairs of gloves on the boat and we recommend wearing them. Once a fish has taken the bait, it aggressively yanks the cord through your fingers as it makes a break for freedom – and once you’ve dragged it onto the boat, the wire becomes extremely heavy and can cut into your skin.

But the good news is in just 90 minutes, we hooked four hammours, all of which were thrown back in to live another day (hammour is over-fished in the UAE: check out choosewisely.ae for more info) and our biggest catch weighed 4kg. 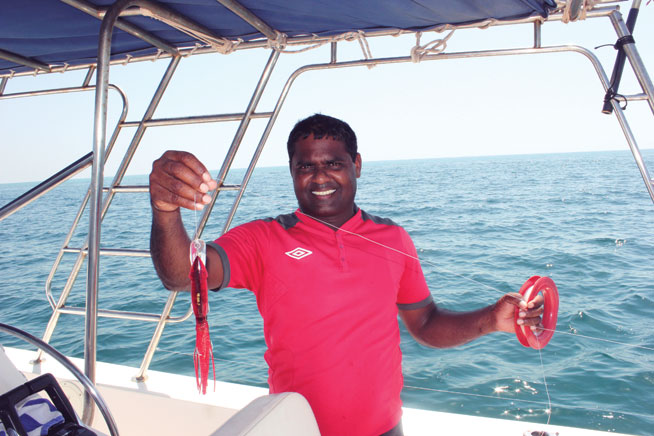 What fish you will come across depends on the time of year you visit. Head out in October and you’re as likely to see para fish, king fish, barracuda and sherry fish as hammour. As a gentle introduction, Danat’s trips are fun and professional – and you’ll get a buzz from finding out how much your catch weighs. It’s so addictive, in fact, we’re thinking of going back, but with a bigger boat.

DON’T WORRY, WE DON’T EXPECT THIS TO HAPPEN…

Eco tour
The Park Hyatt and Captain Tony’s Boat Tours have joined forces to offer Eco Boat Tours, which are excursions through Abu Dhabi’s mangroves with a marine biologist. You’ll learn about the city’s eco-system and its flora and fauna.

Watercooled
Watercooled Abu Dhabi is now offering three-hour fishing packages on its new boat, which departs from Hiltonia Beach Club. The boat has a GPS, fish finder, sunshade, a seating area and a washroom. On-board catering and the chance to cook your catch afterwards are also available.

Catch Of The day
The Sheraton’s new Catch Of The Day fishing and snorkeling expeditions can last either three or eight hours.

News
Outdoor
Sport & Fitness
Things to do
EDITOR’S PICKS
Exclusive Reveal: Topgolf Dubai is here and ready for action
READ MORE
65 of the best outdoor bars and terraces in Dubai
READ MORE
7 brilliant dining deals in Dubai this month
READ MORE
18 of Dubai's most Instagrammable breakfast spots
READ MORE
MOST POPULAR
The best restaurants at The Pointe with Palm Fountain views
Tough Mudder returns to the UAE this February
This family staycation includes daily tickets to Dubai's top attractions
Britain's Got Talent's hilarious improv troupe to perform in Dubai
The best restaurants on Abu Dhabi’s Hudayriyat Island
YOU SHOULD CHECK OUT
Our website uses cookies and other similar technologies to improve our site and your online experience. By continuing to use our website you consent to cookies being used. Read our privacy policy here.