Prost! Where to celebrate Oktoberfest in Abu Dhabi

What’s On details where to celebrate Oktoberfest in the capital, including Du Forum, Beach Rotana, Yas Rotana, Hilton Abu Dhabi and more.

Du Forum
The city’s biggest celebration of all things Bavarian takes place at the Du Forum this month. Expect table dancing, German hops and food, plus entertainment from German band HofBrauHaus. Bavarian grub and German drinks are also available at the nearby Crowne Plaza Yas Island.

Beach Rotana
The hotel’s German restaurant Brauhaus takes centre-stage this month, with a menu of featuring weisswurst (veal sausage), pretzels and obatzda (cheese), plus German brews in litre-sized glasses will be available. Musical trio Winter Baum have been flown in to play during the event as well. 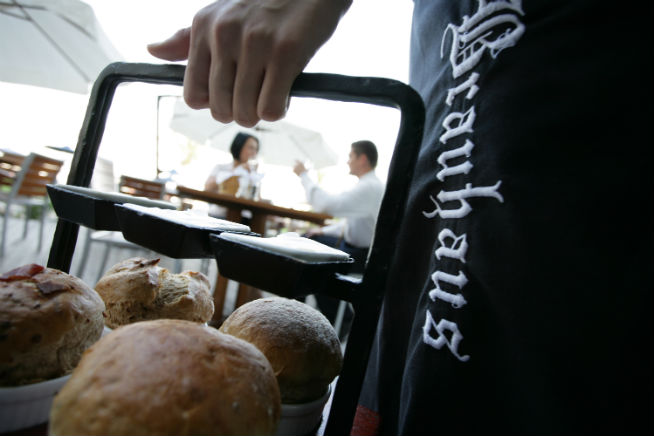 Yas Rotana
Buy a German brew at Y Bar between October 15 and 30 and get another free. The bar will also be holding a German Beer Festival from October 23 to 25, with a barbecue serving sausages and ribs and sauerkraut and German potato salad.

Hilton Abu Dhabi
The hotel’s Hiltonia Beach Garden is the location for its Oktoberfest celebrations this weekend. Dhs135 gets you an all-you-can-eat traditional German buffet and live music from six-piece Bavarian group Das Elements. 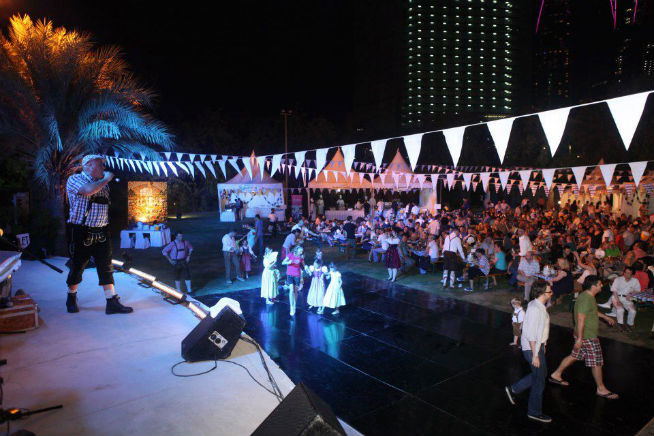 Le Royal Meridien
One of Abu Dhabi’s most famous Irish pubs, PJ O’Reilly’s, is also going German this month, with a variety of brews on offer, plus a menu featuring bratwurst, currywurst, weiner schnitzel and apple strudel.

Sofitel
The hotel’s Chill’O pool bar is serving German brews this month – six bottles will set you back Dhs99 (between 4pm and 9pm), while unlimited brews are available for Dhs111 (between 9pm and 11pm). The bar is also serving snacks and is showing football on giant plasma screens.

Oktoberfest desert party
A trip to the emirate’s desert might not be the most obvious way to celebrate Oktoberfest, but it’s perhaps one of the most fun. The Al Ain Rotana is holding a trip on October 24, which features a belly dancer, a DJ, desert drummers and a fire show.

Grand Millennium Al Wahda
The hotel is extending Oktoberfest into November! The hotel will be offering special rates on beverages and German band BarFuss will be performing in the hotel’s courtyard from November 5 to 8.

Le Meridien
Head to Al Zahiyah at the end of the month for the hotel’s 11th annual Bavarian celebrations. Alpenklang, a group from Bavaria, will supply the music and a German buffet will be on offer, featuring pretzels, sauerkraut, dumplings, sausages and more. A selection of German brews, including Bitburger and Koenig Pilsener will also be available.

Al Ain Equestrian, Shooting and Golf Club
Celebrate all things German at the club’s Palm Greens restaurant this Thursday, with a German buffet on offer, plus drinks promotions, a live band, a kids’ playground and a bouncy castle.

Eat & Drink
Restaurants
EDITOR’S PICKS
Here's the full list of UAE public holidays in 2023
READ MORE
23 incredible things to look forward to in the UAE in 2023
READ MORE
Hidden gems: 10 UAE desert pop-ups to discover this winter
READ MORE
Where to travel in 2023: 10 new flight routes from the UAE
READ MORE
MOST POPULAR
12 new brunches in Dubai that will spice up your February
You can now tour these 12 ladies' nights on Yas Island
Sweep your special someone off their feet at TH8 Palm Jumeirah
Brr... Longevity Sports launches world’s first mobile ice bath in Dubai
Where to celebrate Valentine's Day in Dubai
YOU SHOULD CHECK OUT
Our website uses cookies and other similar technologies to improve our site and your online experience. By continuing to use our website you consent to cookies being used. Read our privacy policy here.