Before a stellar career in the 15s game, what did you love about playing sevens rugby? I played a lot of sevens as a young man and, looking back, I think it really helped develop my skills and, of course, my fitness.

Rugby pitches are massive, so a team of only seven players must have to be super fit to cover that ground, right? Players that play at the top level of sevens rugby have amazing engines. Seven minutes is a long time when you’re constantly running and making decisions. But it’s the contact that really saps your energy.

Which team is going to win in Dubai? I’d love to say England… but New Zealand is a safe bet. 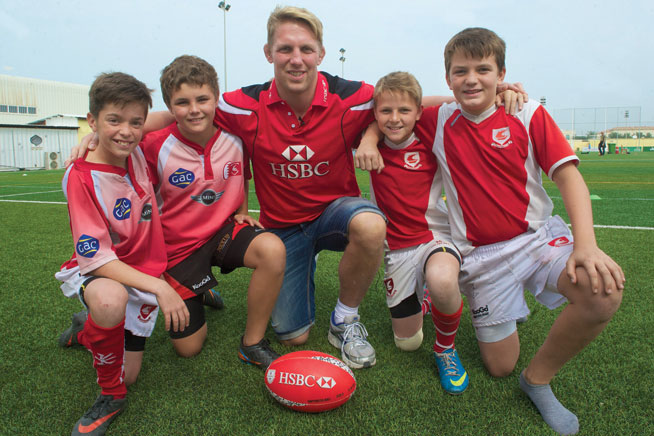 Is the reputation of sevens rugby growing? Absolutely. I recently went to Bahrain and Dubai and it was great to see the youngsters playing sevens. I saw an Emirati team play, so it’s reaching the wider rugby community now.

Sevens makes its debut at the next Olympics – how important is that for rugby? It is a huge boost for rugby as a whole. Watching a sevens match is so exciting it’s bound to help spread the word of rugby globally.

Dubai loves dressing up for the Sevens. When was the last time you wore a costume? I love fancy dress! My last outfit was Axl Rose from Guns n’ Roses – it was a great excuse to wear long hair and a kilt.

Lewis is an HSBC rugby ambassador

PLAYER Q&A
Australian star Emilee Cherry was voted sevens player of the year in 2013. After winning the Dubai Sevens last year, she says it’s a very special tournament for her and the team…

Is the team under extra pressure this year as you’ll be defending your title? It’s going to be in the back of our minds. But this is a new series and everyone will be out to beat us this year.

This is the first round of the women’s series, so you need to start well, right? For sure. With qualification for the Olympics at stake, we’re aiming for a top four position to automatically qualify. 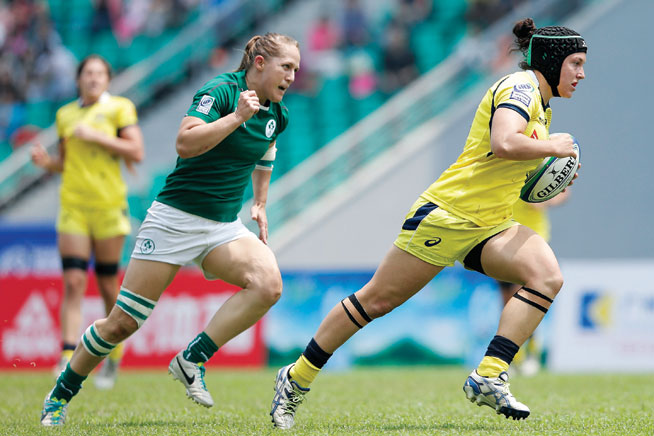 Has the Olympics qualification added an extra edge to this series? Definitely. We’ve seen a huge improvement [in warm up matches], and the game has got quicker and more physical. As a squad our goal is the Olympics and we have to put the hard work in to qualify.

Did the football World Cup in Brazil whet your appetite? Yes, very much. We played a tournament in São Paulo this year and loved the culture and weather. We’re very excited to – hopefully – go to Rio in 2016.

The Australian people seem to have a special relationship with the Olympics, would you agree? Yes, we really do. I feel like, if you grow up in Australia, the Olympic Games is embedded in our culture. You watch the Games on TV as a kid, and all you want to do is represent Australia at the Olympics. Now that that is a possibility in Rio in a couple of years time, it’s a huge goal for us.

What’s the dressing room like before a game? We take a relaxed approach as a team before we play, and that’s when we play our best rugby. We’ve got individual things we do to get ready. There’s always music playing. Our captain, Sharni Williams, gives an inspirational speech before we go out on the field.

What’s on the team playlist? Our number one go-to song is Chicken Fried by Zac Brown Band. A bit of country gets everyone singing along and ready to go.

TEAM TALK
Ben Ryan is one of the most successful sevens coaches in the world. The Englishman left his post as England coach a year ago to take charge of Fiji, and promptly won the 2013 Dubai Sevens. This year, the top four teams in the world series automatically qualify for the inaugural rugby sevens competition at the Rio Olympics…

Do you think the Olympic qualification prize will trigger a new intensity in the matches this season? No doubt it’s a big year. Teams have changed coaches and increased resources – and the Olympics is the reason. I think the quality of teams has improved and there is absolutely no doubt that the Olympic dream fires us all.

You’ve spoken openly about the dream of Rio 2016. Do you worry that looking ahead might distract your team? No. I’m not saying we assume we will automatically qualify for Rio. We know it’s going to be very hard to gain a place. What I’m saying is that our goal is the gold medal in 22 months. The competition for places on the Fiji team is so high that no one is complacent. 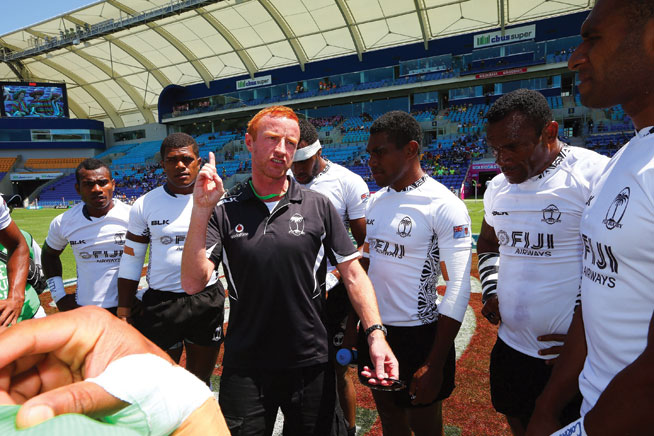 Fiji are famous for the flair they bring to the sevens game. Have you tried to curb those attacking instincts and bring a bit of ‘Englishness’ to their game? I guess it depends what you call ‘Englishness’. Both countries have a huge passion for the game and both sets of players work incredibly hard. No difference there. If it’s the style of play then I think I have never been very ‘English’ in my philosophy.

Who is Fiji’s most explosive player? I don’t like naming an individual so I’m not going to start now. We have lost some outstanding players from last year’s team and we will probably go to Dubai with only two who played in the winning side last year. That’s a huge turnover so a lot of fans will see new Fijian players who have gelled into a winning combination. It’s been tough with that much turnover but it’s a delight every day to get on the field and coach them.

Were the Fiji rugby fans and players suspicious of a foreigner coming in to coach their national team? The Fiji rugby fans know their rugby so they knew me well from my time with England. I’ve always been a fan of the style of Fijian rugby and had said that publicly before I took the role. I hope they have seen that I’m going to do as good a job as I can.

Has it been a difficult transition moving from England to Fiji? Yes, but it’s the best decision I’ve made in my career and the most challenging. As a Londoner moving to Fiji and living in a remote area, the change couldn’t be more stark. The time has flown by. I’ve got some awesome memories already. I’ve made lifelong friends and got better as a coach. It’s a journey that will have a lot of twists and turns I’m sure – but I’m loving it.

News
Sport & Fitness
Things to do
EDITOR’S PICKS
Here's the full list of UAE public holidays in 2023
READ MORE
23 incredible things to look forward to in the UAE in 2023
READ MORE
Hidden gems: 10 UAE desert pop-ups to discover this winter
READ MORE
Where to travel in 2023: 10 new flight routes from the UAE
READ MORE
MOST POPULAR
Pics of the week: Your best photos of the UAE
Dhow & Anchor has got you covered every day of the week
RTA: All the road closures you need to be aware about
Review: The Nice Guy Dubai
Masha and the Bear is coming to Abu Dhabi this April
YOU SHOULD CHECK OUT
Our website uses cookies and other similar technologies to improve our site and your online experience. By continuing to use our website you consent to cookies being used. Read our privacy policy here.