Explore Abu Dhabi Art
Back for the sixth year, Abu Dhabi Year has become one of the city’s flagship events. The event features exhibitions from some 50 galleries, tours of the galleries, musical performances, panel discussions, book launches and the chance to unlease your own talents at a series of workshops. Saadiyat Cultural District will again be the destination for the fair and you’ll also be able to buy works by some of the artists displaying. 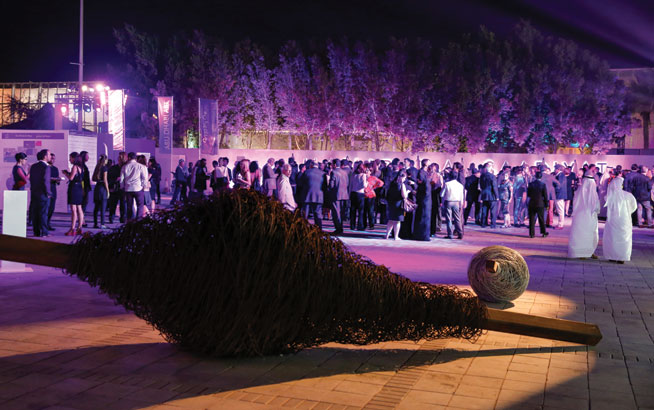 Tuck in at Taste of Abu Dhabi
What do you get if you cross 20 of Abu Dhabi’s top restaurants, celebrity chefs, live entertainment and cookery classes: Taste of Abu Dhabi, a new foodie festival taking place on Yas this weekend. Celeb chefs Michel Jost (executive chef at Yas Viceroy who was also involved with Gourmet Abu Dhabi 2014), Jun Tanaka (third Grand Champion of US cookery show Chopped and star of shows Saturday Kitchen and Cooking It in the UK) and legendary patisserie chef Eric Lanlard (he’s also had his own shows in the UK, including Glamour Puds and Baking Mad with Eric Lanlard) will be giving cooking demonstrations throughout the event. The festival will also feature 20 of Abu Dhabi’s restaurants, including Yas Marina’s Rozanah, Japanese eateries Sho Cho and Koi, Lebanese seafood restaurant Flooka, Caramel and the Belgian Beer Café. Music is supplied tonight by Broadway hit show The Jersey Boys.

Check out Seeing Through Light
Guggenheim Abu Dhabi isn’t expected to open until 2017 but if you want to catch a glimpse of what to expect when it does, head to Manarat Al Saadiyat this month. The pre-opening exhibition Seeing Through Light: Selections From The Guggenheim Abu Dhabi Collection, will feature 16 pieces of art including two loans from the Solomon R. Guggenheim Museum in New York. The pieces are displayed in chronological order, starting in the 1960s, and cover five themes: Activated, Celestial, Perceptual, Reflected, and Transcendent. Artists featured include Angela Bulloch, Monir Shahroudy Farmanfarmaian, Robert Irwin, Y.Z. Kami, Bharti Kher, Rachid Koraïchi, Yayoi Kusama, Otto Piene, and Douglas Wheeler. 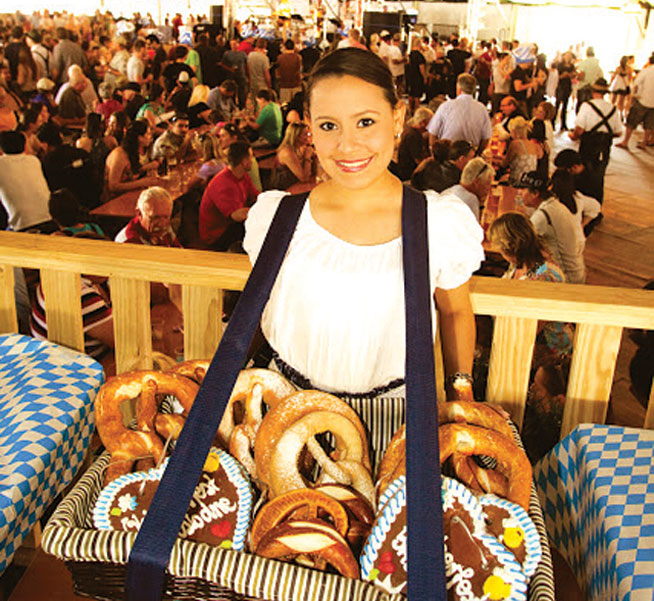 Watch Beauty and the Beast
The classic fairy tale ends its run in Abu Dhabi this weekend. This award-winning Broadway show is based on the 1991 animated Disney movie.

Try a new abra experience
Ever stood on the sand at the Shangri-La or Fairmont hotels and wondered how long it’d take to cross the Maqta Creek and reach the Ritz-Carlton? Wonder no more. A new abra sefvice has been launched, taking you on a 20-minute journey along the waters and it stops at The Ritz-Carlton, The Souk, The Fairmont Bab Al Bahr and the Shangri-La Hotel.

Check out Fluid Dynamics on Yas
Art and science might seem like unusual bedfellows, but the two worlds collide perfectly this month at Yas Viceroy as part of Swiss Art Gate’s series of exhibitions called Crossroads. The latest, #17, is on display at the hotel and features the work of Fabian Oefner. A Swiss artist, his exhibition Fluid Dynamics, features brilliant splashes of colours created by using centrifugal force (the apparent force that draws a rotating body away from the center of rotation) and opposing chemical compounds (such as oil on water) and perfectly timed flash photography to capture the moment paint splatters onto a canvas. The results are complex and colourful. 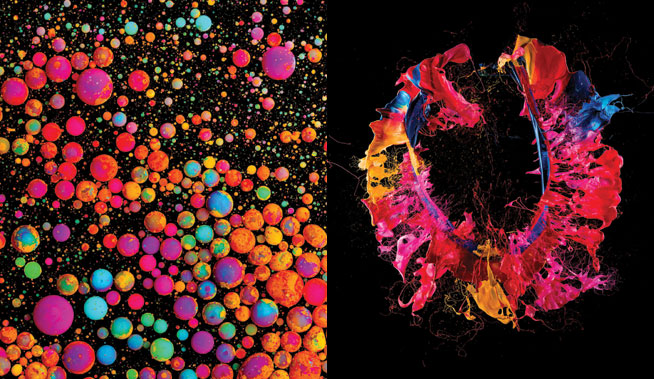 Bonfire night at The Club
You can expect plenty of fireworks tonight at The Club. The Meena Port-based venue is holding a Guy Fawkes Night party for both its members and their guests, featuring a giant bonfire with a traditional Guy Fawkes on top (a chap who, for those of you who don’t know British history, was caught trying to place explosives beneath the House of Lords in 1605), which will be lit at 7pm, a firework display at 7.30pm, and guests can buy a gourmet picnic basket for the evening as well. 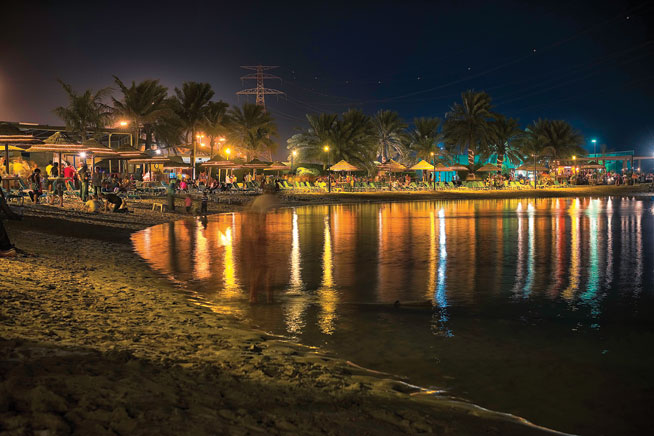 Take part in #Walk2014
If you fancy joining some 15,000 other Abu Dhabians in the fight against diabetes next week, then we suggest you sign up for #Walk2014 now. The stroll takes place on Yas Island today is one lap around the F1 track: that’s 5.5km. You get a T-shirt and a cap included in the registration price.

Get fit on an Aqua bike
Cycling and swimming: two very good ways to trim down and get some exercise. So what happens when you combine the two? SpaBike is a revolutionary aquatherapy treatment now available for the first time in the capital at Bodylines Spa at the Yas Island Rotana. In simple terms, it’s a bike in a bath and experts claim you can burn up to 700 calories per session (the hydraulic friction created means you burn more calories quicker than you would doing traditional cycling) and the makers of SpaBike claim the technology (which include water jets in the bath tub your bike sits in) can reduce cellulite as well. 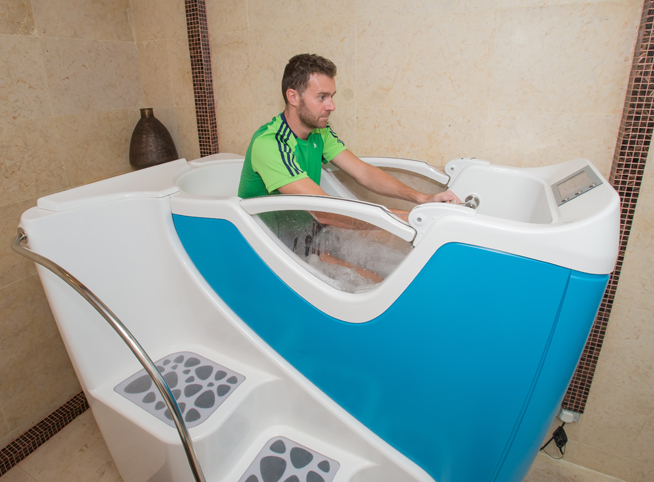 Lights, camera and a drink
The Novotel Abu Dhabi Gate is now holding two movie nights a week in its Al Nasseem Bar. Two flicks are shown every Monday night at 7.30pm and 10pm, while there’s a kids’ movies night every Friday at 7pm. Call ahead to find out what films are being shown, but recent screenings have included romantic comedy Think Like A Man, starring Michael Ealy and Kevin Hart, while films including Disney’s icy adventure Frozen has been shown on previous Fridays.

Try breakfast at the beach
Beach House at the Park Hyatt Abu Dhabi Hotel and Villas is now serving a breakfast menu, featuring salmon with potato and leek cakes, and oven-baked rosti with fried eggs.

Foie gras at Le Beaujolais
The king is in Abu Dhabi this month. But we’re not talking about Elvis. We’re talking about Robert Chaffanjon, Don’t know him? He’s been called the ‘king of foie gras’ in France (he’s the founder of Moulin De La Molle, a company that makes the controversial duck’s liver delicacy back in his home country). This month, he’s spending three weeks at French mainstay Le Beaujolais and will be preparing a special menu featuring the dish.

Sign up and stride
The annual Abu Dhabi Striders half marathon takes place on Yas Island on November 14 and there’s still time to sign up and take part. Participants get a day’s access to Yas Waterworld afterwards.

Carve it up at Porter’s
A trip to a pub to eat an enormous slab of meat smothered in gravy is weekly pilgrimage for folks in the UK and now you can try it here in Abu Dhabi. Porter’s Pub is serving a selection of meats (the menu changes every week) including Angus rib eye and turkey, which is carved for you by the chef at your table. You get plenty of sides in the cover price, including mixed veg, mashed and roasted potatoes Yorkshire pudding, sautéed cabbage and apple crumble. The price also includes one pint of Australian hops.

Loy Krathong at Dusit Thani
November in Thailand is time for Loy Krathong, otherwise known as the Festival of Lights. Loy Krathong translates roughly into ‘to float a basket’ and thousands of intricately decorated small boats are recepicales with glowing lights and candles are released into Bangkok River every year. Not surprisingly, Abu Dhabi’s Thai hotel is getting in on the act and is holding its own festival to celebrate. The hotel’s Thai chef Yongyos Chimthep of Benjarong is serviing a special a la carte menu for ten days this month. 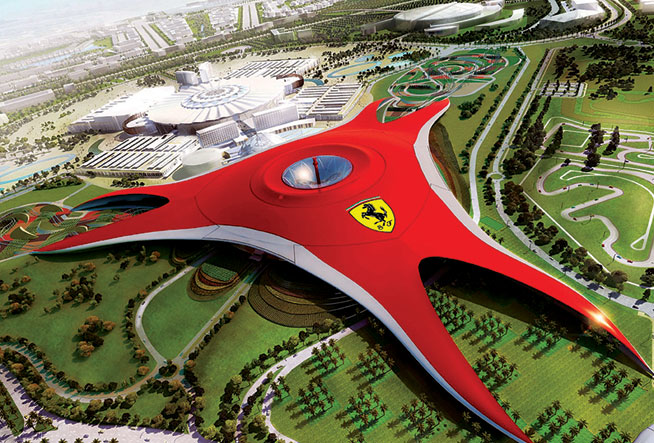 Lights at Sontaya
The Thai restaurant also celebrates the country’s Festival of Lights this month and is offering a special set menu.

Discover a New You
Granted, there might be nothing wrong with the old you, but if you’re need of some TLC, then you might want to head to the spa at the Ritz-Carlton. The hotel has launched a New You day spa package, which includes a two-hour treatment, including back exfoliation, a back massage, facial treatment and a scalp massage. You’ll also get complimentary access to the hotel’s pool and use of the sauna and steam room, plus a bento box meal and a drink once you’ve finished the treatment.