What’s On previews the Emirates Airline Dubai Rugby Sevens at Sevens Stadium. Get ticket information and everything else you need to know.

Now in its 45th year, the Emirates Dubai Rugby Sevens has become a spectacular three-day event, attracting fans from all around the world to the highlight of the social calendar in the region.

THE ESSENTIALS
How much are the tickets? The event starts at 7.30pm on Thursday December 4 and entry is free. However, day passes for the Friday or Saturday cost Dhs300 per day.

How do I get there? The Sevens Stadium is just over 30 minutes’ drive from Sheikh Zayed Road. Take the Al Ain Road (E66), and carry on beyond Emirates Road and the Outlet Mall. The event is signposted. A taxi ride will cost you approximately Dhs90.

Should I drive? You can, but the queues from the car park are long, so we advise taking a taxi there and making the most of the many free shuttle buses back. The bus service starts from 6pm every night with final buses leaving at 1am. The drop-off points are: Movenpick in JLT, Girders in JBR, Barastic, Dubai Media City, Bidi Bondi, Dubai Motor City, Umm Suqeim 3, Al Marooj Rotana, Dubai Festival City and Irish Village.

Is there parking? If you insist on driving, then you’ll be happy to know that there are 12,000 car park spaces available at the stadium – all of which are free of charge. However, if you get caught in traffic on the way out, don’t say we didn’t warn you.

When is the best time to go? The earlier the better. The Sevens attracts up to 50,000 people daily, so make sure you get the best seats and beat the queues by coming early. The gates officially open at 7.30am, but let’s face it – that’s far too early for a weekend. We’ll see you there around 10am.

If I have to leave during the day can I come back in? Yes indeed. Upon arriving you are given a wristband that allows you to roam in and out of your section as you please.

How do I pay for food and drink? Food and drink at The Sevens is bought using coupons, but you’ll need to bring money to buy the booklets – there are plenty of ATMs on site.

Did you know…
… there’s free transport back to the after-parties? Scroll down for more

Is it a family-friendly event? It’s not all about blokes and rugby balls…
– You can get your photo taken with the Webb Ellis (below) rugby world cup trophy, which will be on display. There’ll be some very big security guards nearby so don’t try and pinch it for your mantelpiece, OK?
– The HSBC World Of Sport is a playtime paradise for children. They can play rugby in a variety of games, challenges and tests.
– There’s a crèche for parents who want to leave their kids for a while so you can concentrate on the rugby.
– Don’t forget: U12s get in free.
– The family section at the Sevens has been expanded for this year’s event with tonnes of stuff for mini rugby fans to enjoy. There are more than 2000 seats in the family enclosure.
– Look out for bouncy castles, face painting, temporary tattoos, and circus performers demonstrating their skills.
– Look out for the What’s On Big Ball In The Crowd. The name tells you all you need to know. 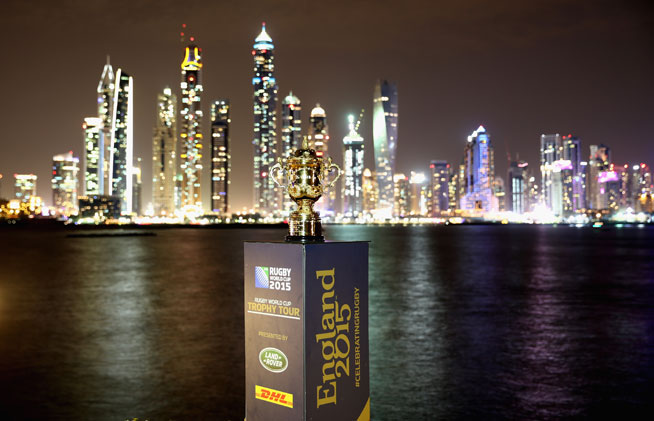 What else is there? Captain Andrew Gregory is the director of music with The Band Of Her Majesty’s Royal Marines Scotland. They’ll bring 40 musicians to the Sevens Stadium to play traditional marches as well as contemporary pieces.

You might also want to polish your kicking skills before you arrive at the Sevens. Some spectators will be given the chance to kick the ball through the posts in a game sponsored by Emirates Airline. The winner of the competition will receive tickets for the rugby world cup in England next September.

There’s also The Aggreko Dynamos, once again keeping the atmosphere ticking over with their cheerleading routines and pom poms. A team of 12 Australian professional dancers will perform at the Sevens this year, led by manager Amber Field, for whom this is her tenth tournament in Dubai. Find out more about the girls here.

What time does it end? While the final match on each of the days is around 9pm, we recommend staying behind and revelling in the party-like atmosphere. When the final whistle goes head to the Rugby Village outside the stadium to dissect the games and compare costumes. Music comes from The Boxtones and The Daytrippers, who promise a “rock ‘n’ roll party with loud guitars”.

And when that’s done, you can keep the party going by jumping on a bus and heading off to one of the many post-event venues. The gates officially close at midnight.

So what about these infamous after-parties? Watching rugby is thirsty work and rehyrdration is key. Free buses will drop spectators back in Dubai at venues where you can refresh yourselves. These are the pick of the bunch.
– Irish Village There’s live music from Dubai band The Maple Jacks, and DJs will play tunes on all three nights. An all-day breakfast is available from 11am – ideal fuel for a day in the stadium.
– Societe The Marina bar and club is hosting a rugby party with a Club Tropicana theme in collaboration with Nell Gwynn pub in the Marina Byblos Hotel. Partygoers are encouraged to wear shorts and flip-flops.
– Barasti The always-popular outdoor bar at Le Royal Méridian Mina Seyahi will have rugby-themed events; Bidi Bondi Beach Club on The Palm, and UBK bar in the Mövenpick JLT will also host rugby parties.

But what about the rugby itself? While it is essentially the same game as its bigger 15-a-side cousin, Sevens has some important differences that make it faster, more explosive and more skilful. 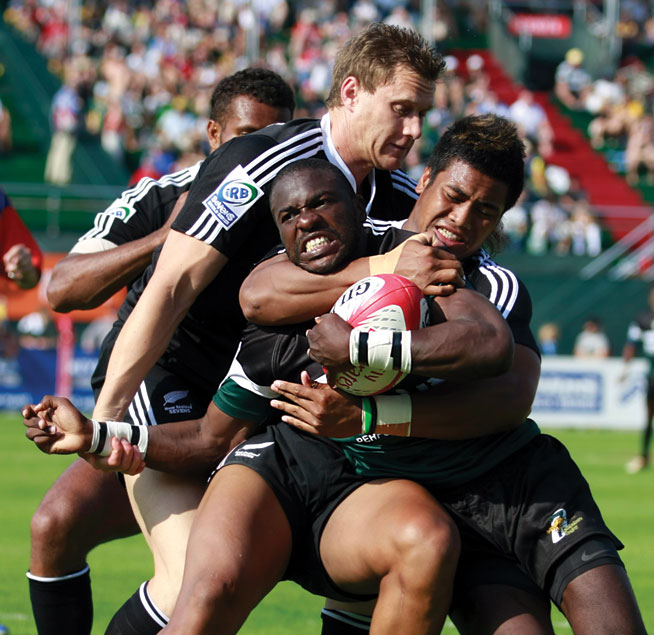 Bars
News
Nightlife
Salaam!
Sport & Fitness
EDITOR’S PICKS
Exclusive Reveal: Topgolf Dubai is here and ready for action
READ MORE
65 of the best outdoor bars and terraces in Dubai
READ MORE
7 brilliant dining deals in Dubai this month
READ MORE
18 of Dubai's most Instagrammable breakfast spots
READ MORE
MOST POPULAR
The best restaurants at The Pointe with Palm Fountain views
Tough Mudder returns to the UAE this February
This family staycation includes daily tickets to Dubai's top attractions
Britain's Got Talent's hilarious improv troupe to perform in Dubai
The best restaurants on Abu Dhabi’s Hudayriyat Island
YOU SHOULD CHECK OUT
Our website uses cookies and other similar technologies to improve our site and your online experience. By continuing to use our website you consent to cookies being used. Read our privacy policy here.