What’s On has details of Dubai’s highest rooftop club, District 47 at the Warwick Hotel on Sheikh Zayed Road.

It was only in January when the H Hotel acquired the title of Dubai’s highest bar, but fast forward less than 12 months later and the baton has been passed on.

Starting Thursday 11 December and continuing into the New Year, the weekly schedule includes live bands from 8pm every Thursday and old school urban, hip hop and RnB with Dany Neville on Fridays. Food with a pan Asian theme will also be served between 9pm and 12am.

Speaking about the District 47 relaunch and relocation, founder Alan Honein said: “We know our guests and followers very well; they are sophisticated, particular and trendy yet down-to-earth and our new location is set to emulate this.” 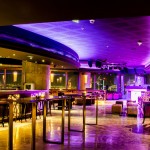 Q43
The fact that What’s On HQ is in the same building as Q43 instantly gives it some clout, but the 360 degree views of the Palm, Marina and Burj Al Arab, make it Media City’s new hotspot.
Media One Hotel, Media City, Dubai, opening hours to be announced. Tel: (04) 4271000. Metro: Nakheel. mediaonehotel.com 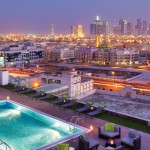 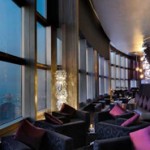 NEOS
The Dubai Fountains are pretty impressive from the ground level, but hoist yourself up 63 floors and they become mind-blowing. The view of the Burj Khalifa isn’t half bad either. You’ll have to take two lifts to reach it, but once you do, the twinkling city views and art deco-inspired interiors will ensure you stay for more than just the one.
The Address Downtown, Dubai, daily 6pm to 2.30am. Tel: (04) 4368888. Metro: Burj Khalifa/Dubai Mall. theaddress.com 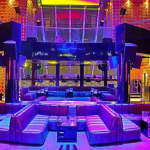 PEOPLE BY CRYSTAL
Drink in the 360-degree view at this glitzy bar and club on the 17th floor of Raffle’s in Wafi City – which, for those who are new to town, is Dubai’s take on ancient Egypt. Think imposing pyramids, gold pillars and giant pharaoh statues, complete with a host of five-star restaurants, bars and a sprawling mall. It’s Disneyland for adults and well worth a trip.
Raffles Hotel, Wafi City, Dubai. Tel: (050) 2972097. Taxi: Wafi. 11pm to 3am. peopleofdubai.com

40 KONG
Situated on the 4oth floor of One Sheikh Zayed Road, the new hotspot claims to take guests on a ‘an audio journey from sunset to the early hours’, catering for everyone from post-work drinkers to late-night revellers. Food with an international theme will also be served. With options of low lounge seating to capture the sunset or sat up high at the bar to gain uninterrupted access to the stunning views, all whilst listening to the smooth tunes or live sounds of 40Kong, this urban space will not fail to impress.
40Kong, Floor 40 The H Hotel, Sheikh Zayed Road, Dubai. Tel: (05) 0297 2097. Metro: World Trade Centre. Taxi: The H Hotel. 5pm–3am, Sunday–Saturday. facebook.com/40kong

Bars
News
Nightlife
EDITOR’S PICKS
UAE holiday dates announced for Eid Al Adha
READ MORE
Another update: Emirates extends suspension of flights from India to UAE
READ MORE
Coming soon: Everything we know about Ain Dubai so far
READ MORE
Khorfakkan set to open new tourist attraction 580 metres above sea level
READ MORE
MOST POPULAR
It's Dhs350 to brunch, stay and play at the What's On Lock In this weekend
After party: 8 of Dubai's best after-brunch deals on a Friday
Jones The Grocer is bringing its cheese, grape and jazz night to Abu Dhabi
A two-day art festival is taking place in Alserkal Avenue this weekend
Transport to Greece as Opa's monthly brunch returns
Al Qana update: Abu Dhabi mega project announces four new F&B outlets
YOU SHOULD CHECK OUT
Our website uses cookies and other similar technologies to improve our site and your online experience. By continuing to use our website you consent to cookies being used. Read our privacy policy here.