What’s On celebrates the best restaurants in Abu Dhabi, as well as spas, leisure and entertainment – it’s the What’s On Award Abu Dhabi.


The best in leisure, entertainment and dining awards were celebrated in Abu Dhabi on October 20, 2014, during a glamorous party at the St Regis on Saadiyat Island. Thousands of you voted in the city’s outlets and online, and now the winners have been revealed.

RESTAURANT OF THE YEAR

Bord Eau, Shangri-La Hotel
This multi award-winning French restaurant has it all: a sophisticated menu, impeccable service and some of the most elegant and romantic décor in the city with stunning views of the creek. It remains the place to go to for food lovers in the capital. And its famous chocolate extravaganza dessert is as good as ever. 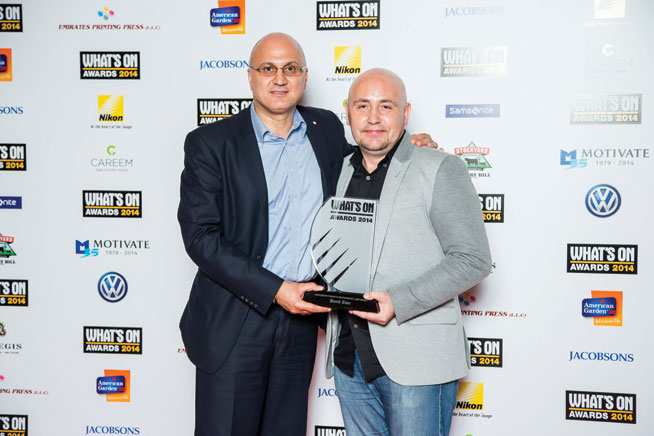 CHEF OF THE YEAR


Sinju Varghese, Chef de Cuisine, Sayad, Emirates Palace
Our chef of the year once told What’s On, “A kitchen is a tough place to work.” But the Chef de Cuisine at Emirates Palace’s seafood restaurant manages to make it look very easy, and was a worthy winner at our awards ceremony. His dishes draw on many influences: try the Arabic spiced grilled salmon (with dates marmalade) and the pumpkin risotto with harissa. 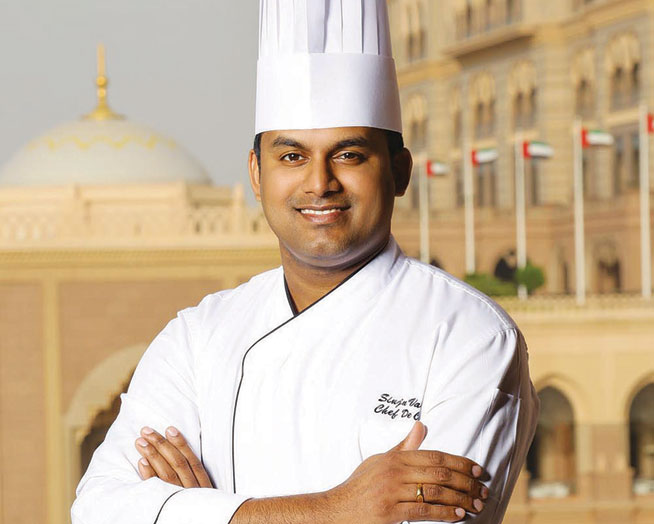 INDIE RESTAURANT OF THE YEAR

Café Arabia
When the panel of judges were asked to give an award to an outlet in the capital that isn’t in a hotel or mall and doesn’t serve alcohol, only one name sprung to mind. Café Arabia is as much a community as it is a restaurant and holds exhibitions, book readings and even concerts. The brunch here is dirt-cheap as well and the chic yet slightly rough around the edges décor, set over two floors of a house, give it a homely feel. Every Abu Dhabian should visit here at least once.

NEWCOMER OF THE YEAR

Zuma
A creative and spellbinding menu of Japanese dishes served in a modern, classy setting: Zuma is the kind of restaurant that is making Abu Dhabi a major player on the global foodie scene and it was no surprise when the panel of judges named it Newcomer Of The Year. 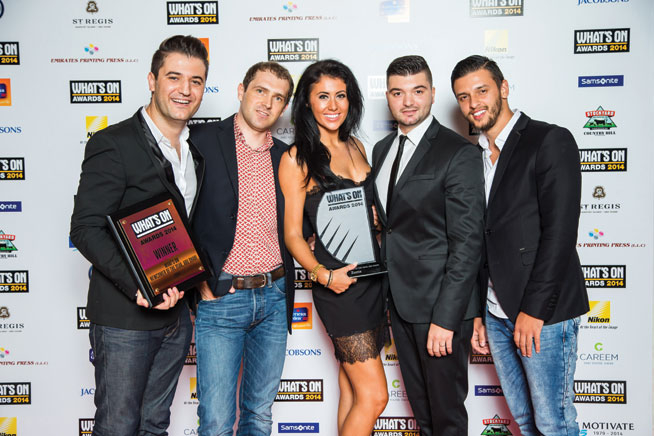 VOTED FOR BY YOU

FAVOURITE CAFE
The One
A café in a furniture store might not be the most obvious of settings, but it does mean that you get to enjoy some brekkie or a spot of lunch with friends while sitting on some pretty decent décor. Our army of readers clearly like it, as The One was crowned Favourite Café for the second year in a row. 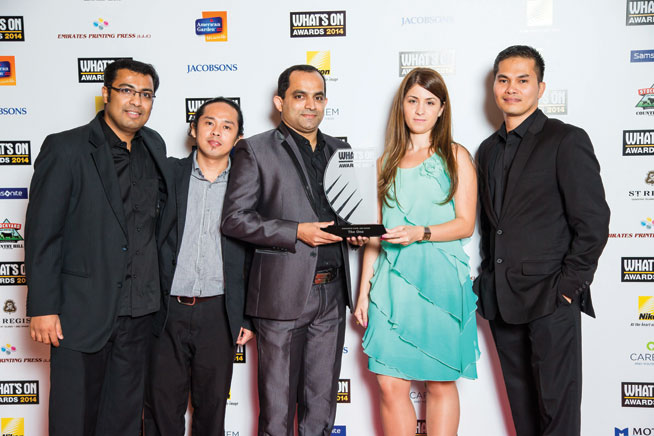 FAVOURITE BRUNCH
Giornotte, The Ritz-Carlton Abu Dhabi, Grand Canal
How big is the brunch at Giornotte? So big you’re given a map on arrival. The 27 cooking stations cover all of Giornotte and there’s so much on offer that desserts are served in the hotel’s café Dolce next door. The classy surroundings, variety, family-friendly vibe and unique entertainment (a chap playing Metallica covers on the piano) must have impressed plenty of the city’s residents, as the votes flooded in to crown it your Favourite Brunch of 2014. 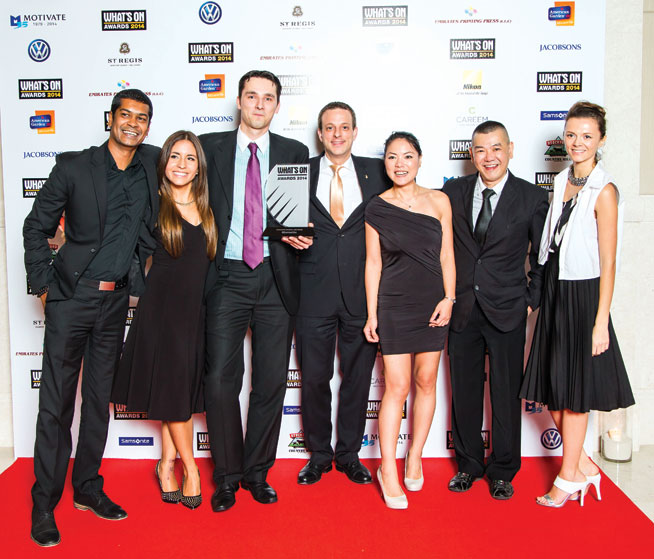 FAVOURITE CHINESE RESTAURANT
Shang Palace, Shangri-La Hotel
The elegant surroundings of the Shangri-La are home to many top restaurants, and the menu does classic dishes well, such as crispy duck with pancakes, but also features many special signature dishes worth scoffing, including crispy octopus with plum garlic sauce. But it’s the various special events it holds that really show off its creatively, such as its Hong Kong street food festival earlier this year. 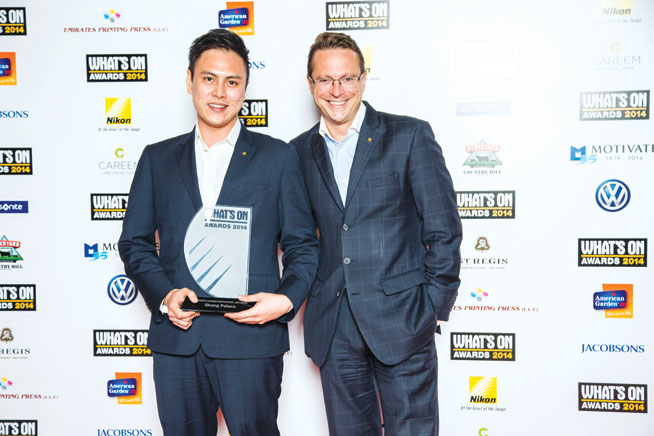 FAVOURITE HEALTHY EATING RESTAURANT
BiteRite Restro Café
The newly-created Healthy Eating category for the 2014 awardswas sponsored by Daman and the winner, BiteRite was the perfect choice, as they list how many calories are in every single item on the menu. There can be no greater satisfaction than ordering items such as their spinach and mushroom soup, which has only 28 calories.

FAVOURITE INTERNATIONAL RESTAURANT
Fairways, Westin Abu Dhabi Golf Resort & Spa
The huge spread on offer at Fairways is popular not only with visitors to the hotel, but also the weekend crowds from Khalifa City and beyond (when it’s often booked up weeks in advance). You’ll find a massive spread of dishes, with seafood, curries and local dishes and more. 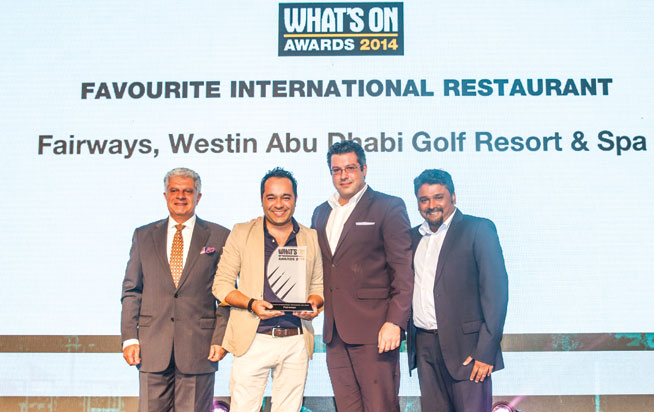 FAVOURITE FRENCH RESTAURANT
Bord Eau, Shangri-La Hotel
If you’re going to eat frogs’ legs in one place in Abu Dhabi, we recommend you do it at Bord Eau. The outlet walked away with two awards this year, including the biggie – Restaurant Of The Year – and now it’s up to new chef Didier to prove he can retain the title next year. 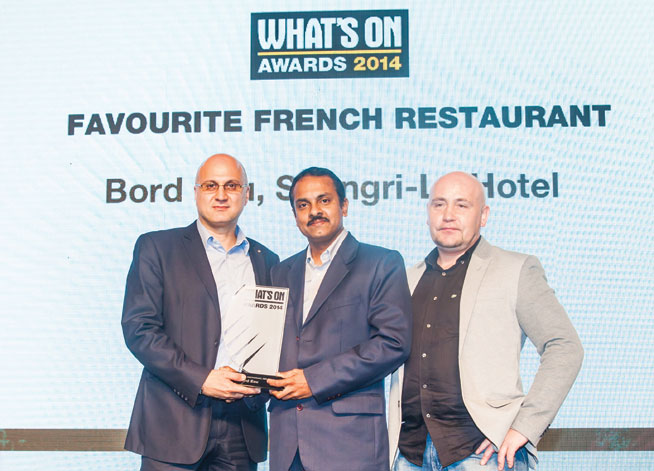 FAVOURITE INDIAN RESTAURANT
Spice Mela, Rosewood Abu Dhabi
You might call Indian food many things: spicy, colourful, hearty, but very few restaurants produce genuine fine dining, gourmet Indian dishes. Thankfully, one that does just happens to be in the Rosewood Abu Dhabi. Chef Siddharth’s dishes are clever. They’re sophisticated yet there are influences of street food in there as well. It’s the most creative menu in what was a hotly-contested category. 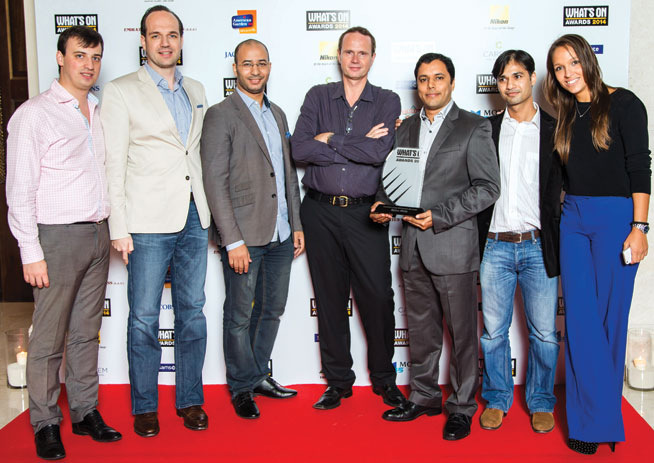 FAVOURITE SEAFOOD RESTAURANT
Sayad, Emirates Palace
While the What’s On panel was so impressed with Sayad chef’s Sinju that we crowned him Chef Of The Year, it seems the voting public were also pretty impressed with the dishes served here, in perhaps Abu Dhabi’s most opulent of hotels. 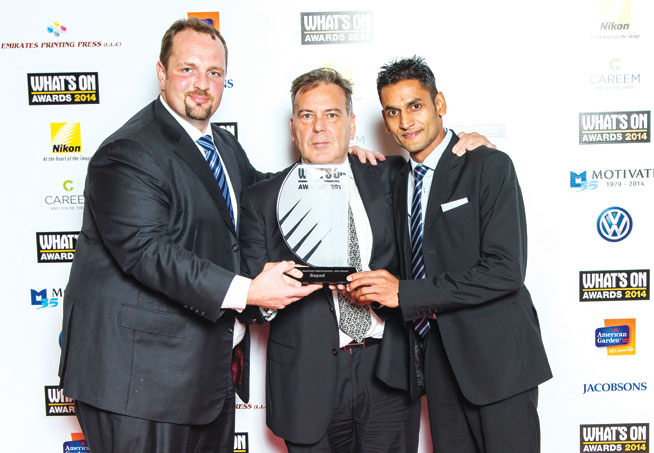 FAVOURITE MODERN EUROPEAN RESTAURANT
Catalan, Rosewood Abu Dhabi
It’s one of those places you take that special person in your life to and the European cuisine served here is some of the best in the emirate. This is fine dining with a capital F, with everything from steamed cockles to monkfish suquet and grain-fed chicken paella on the menu. Fancy some grape? Catalan does menu pairing better than most places in Abu Dhabi. 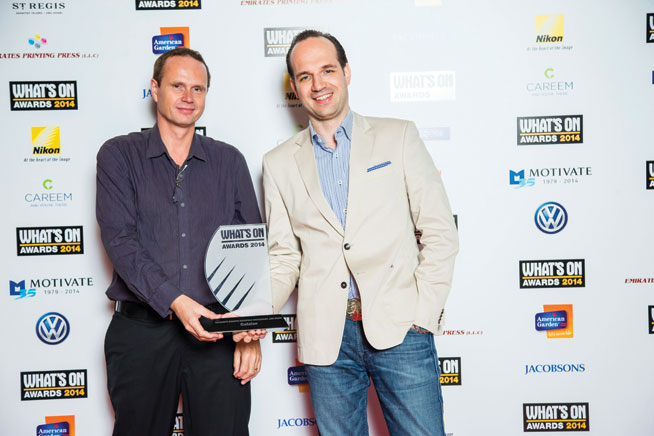 FAVOURITE STEAKHOUSE AND GRILL RESTAURANT
The Foundry, Southern Sun Abu Dhabi
Considering the Southern Sun has only been open since the summer, the impression it’s made on our readers has been spectacular. None of the What’s On team would have predicted such a new restaurant would secure the most votes, but one visit will explain why it’s been crowned the winner. The quality of the meat is second to none, as are the personal touches – you get to choose your steak knife from a box, containing six knives with different handles. 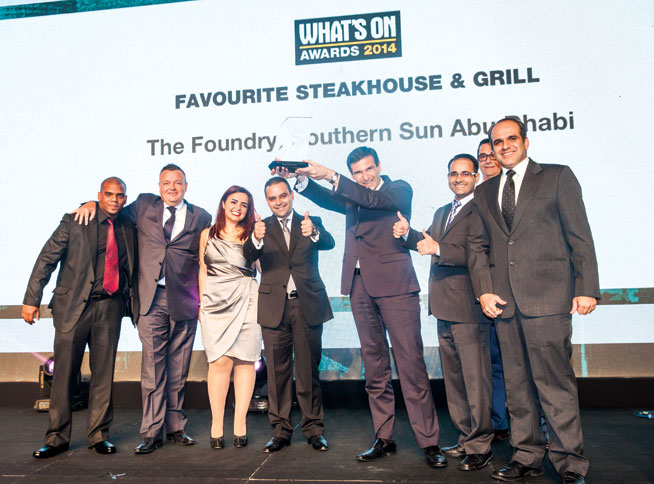 FAVOURITE THE AMERICAS RESTAURANT
Chamas, InterContinental Abu Dhabi
It’s all about the big cuts of meat at Chamas, Abu Dhabi’s churrascaria restaurant, but the atmosphere here is what makes it so much fun as well, thanks to samba dancers and TropiMambo, the restaurant’s Colombian band. Without a doubt one of the more lively places to eat in the city. 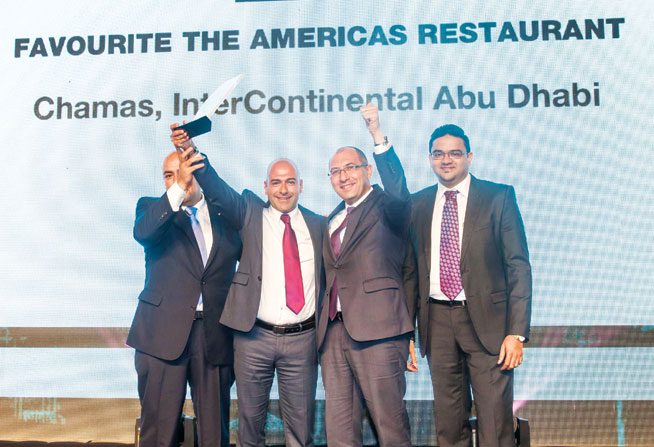 FAVOURITE MIDDLE EASTERN RESTAURANT
Li Beirut, Jumeirah At Etihad Towers
The hotel’s vision with this restaurant was to revolutionise Lebanese cuisine – and it’s safe to say they’ve succeeded. This is yet another gong for the multi-award winning restaurant, and we imagine the zaatar-crusted rack of lamb probably secured them a few votes alone. 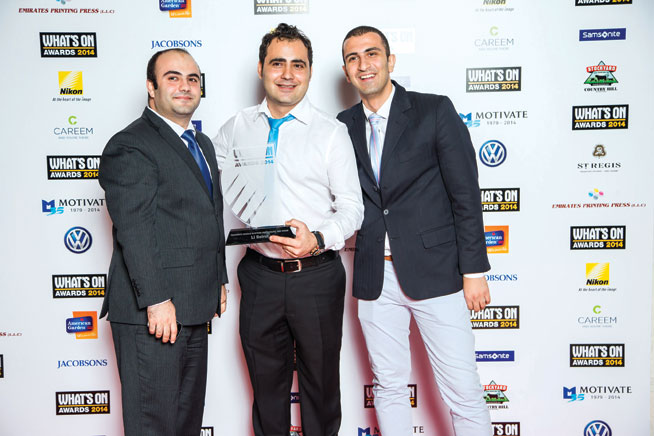 FAVOURITE THAI RESTAURANT
Silk & Spice, Sofitel Abu Dhabi Corniche
An elegant venue serving fantastic Thai dishes created by head chef Jatuphol Puyprom, Silk & Spice fought off some tough competition to walk away with the gong. Thai food is a growing scene in the city, and with rumours about another opening for 2015, this will become an even more hotly contested category next year. 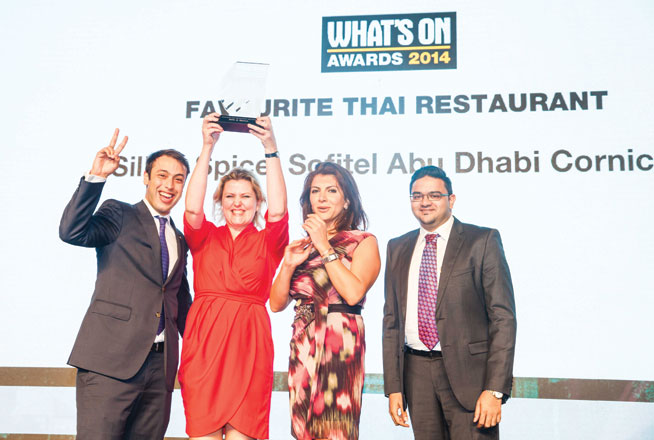 FAVOURITE JAPANESE RESTAURANT
Koi, The Collection
The Collection on Saadiyat is becoming one of What’s On’s favourite places to visit and Koi’s contemporary menu is bold, fresh, colourful and beautifully presented. It’s also very tasty. A tip from us – try the grilled lobster tail. 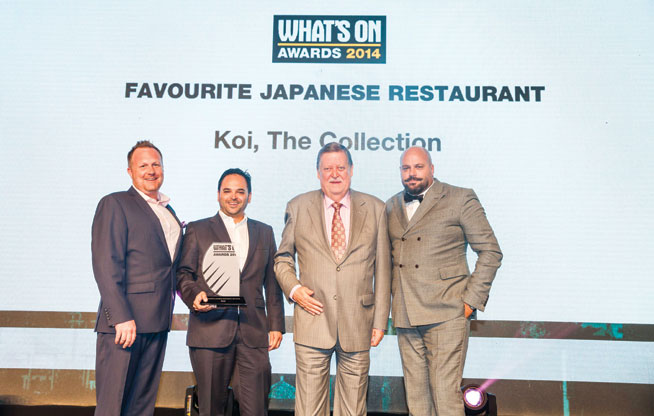 FAVOURITE PUB GRUB
Hemingway’s, Hilton Abu Dhabi
With so many glitzy venues in the capital, it might seem surprising  that one of the oldest hotels in the city got the most votes for pub grub. But then again Hemingway’s, huge, excellent value for money Tex-Mex dishes and jovial staff have been drawing regulars in for years, especially at the weekend when the football is on the bar’s TV screens. 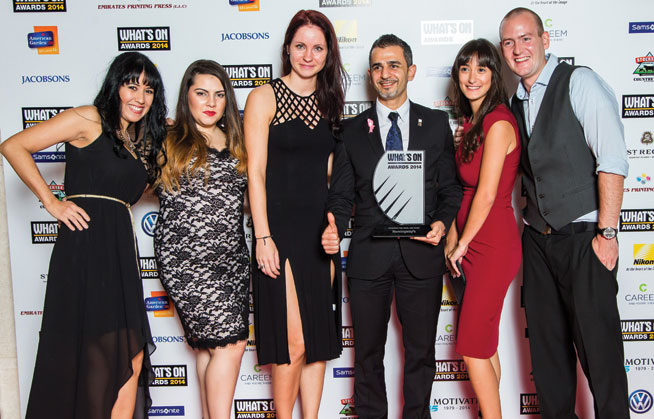 FAVOURITE PAN-ASIAN RESTAURANT
Toshi, Grand Millennium Al Wahda
This Grand Millennium eatery gets it right on so many levels – from its teppanyaki station to popular theme nights such as sushi, Thai and seafood. Sleek reds and blacks line the walls, giving it a modern and hipster feel. This is a restaurant that is a jack of all trades – but it’s also a master of them all as well, and the public, it seems, agrees, as it easily secured the most votes in this category. 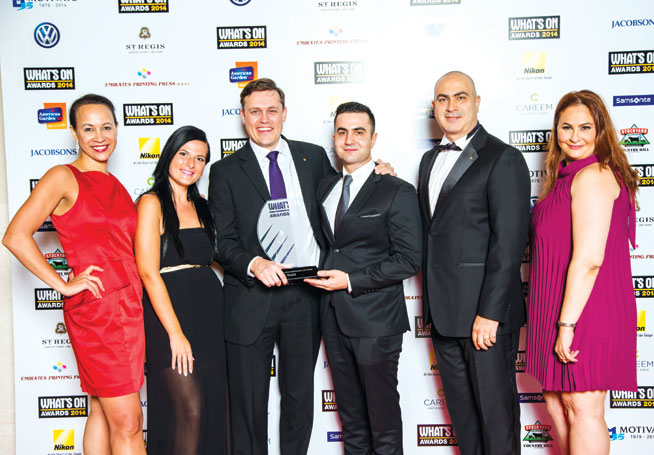 FAVOURITE BUSINESS LUNCH
Frankie’s Italian Restaurant & Bar, Fairmont Bab Al Bahr
Frankie’s is the sort of place to have a relaxed, casual business lunch with a client and at Dhs125 for three courses it is also great value. The friendly, jovial yet professional staff add to the vibe and the pappardelle with chicken and button mushrooms and veal shank ravioli are stand-out dishes on a menu you’re guaranteed to have served to you in under an hour. 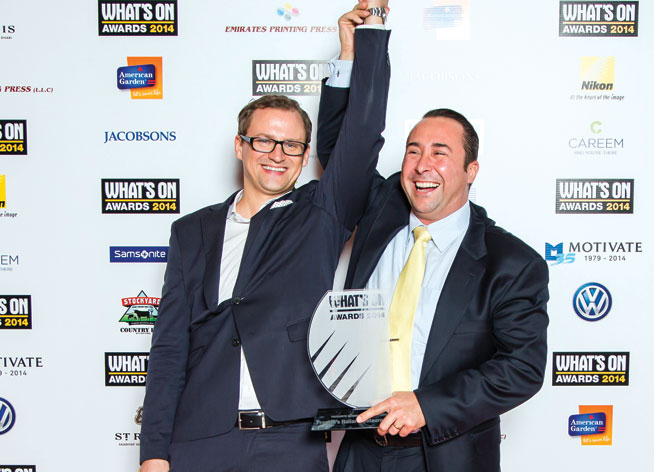 FAVOURITE BRITISH RESTAURANT
Marco Pierre White Steakhouse & Grill, Fairmont Bab Al Bahr
Let’s face it: Marco knows a thing or two about cooking beef. His Abu Dhabi steakhouse has been open for five years and has cooked some 50,000 steaks in that time – plenty of those to What’s On readers, judging by the number of votes it secured. 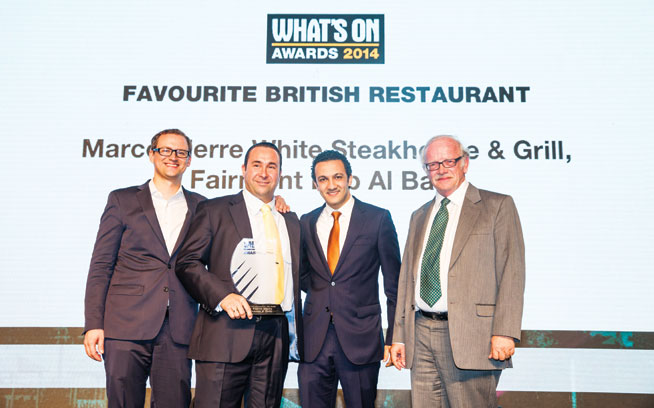 FAVOURITE ITALIAN RESTAURANT
Porto Bello, Grand Millennium Al Wahda
Fine Italian fare that is also fantastic value for money, Porto Bello’s wall of high, airy windows make it a perfect location for lunch, let alone dinner. Considering it’s location in busy Al Wahda, it’s even managed to create some tranquility in its awesome al fresco area. As for the food? Strong flavours and simple dishes make this a place that now has its fair share of regulars, including What’s On’s readers, who made this one a runaway winner in its category. If you’ve not tried the hotel’s brunch here on a Friday, you’re mising out. It features unique dishes and great tunes from mariachi group The Trio Band. 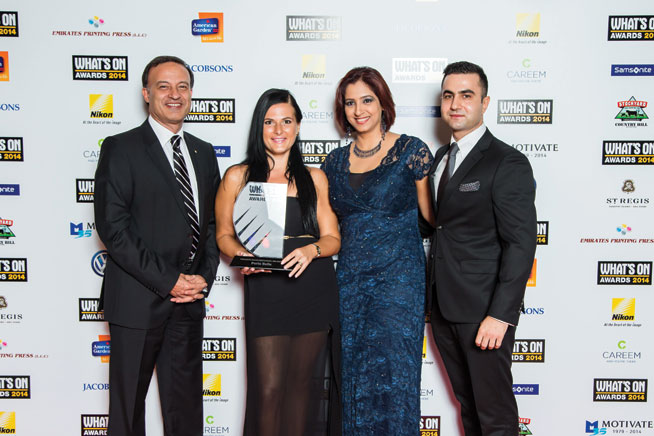 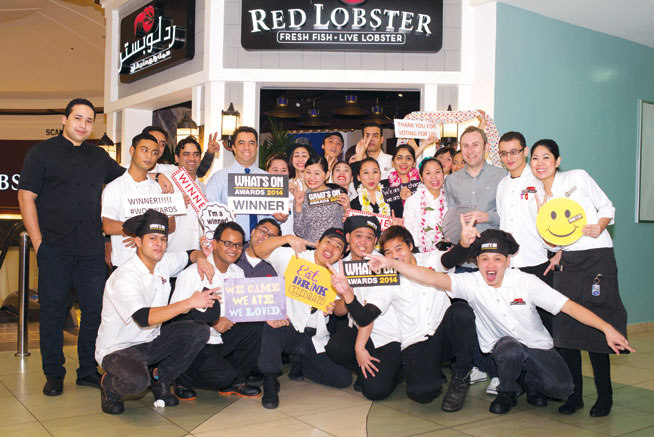 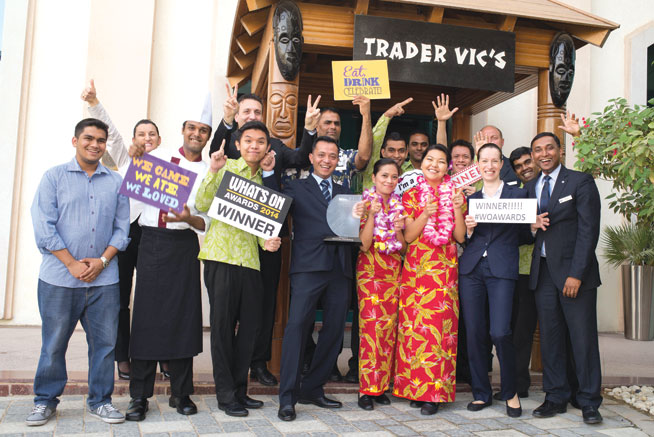 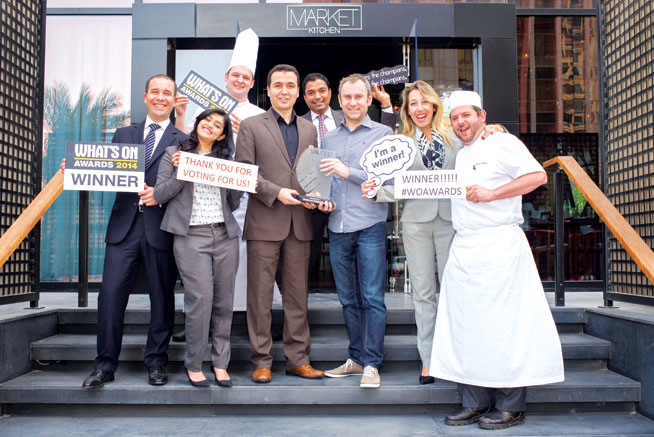 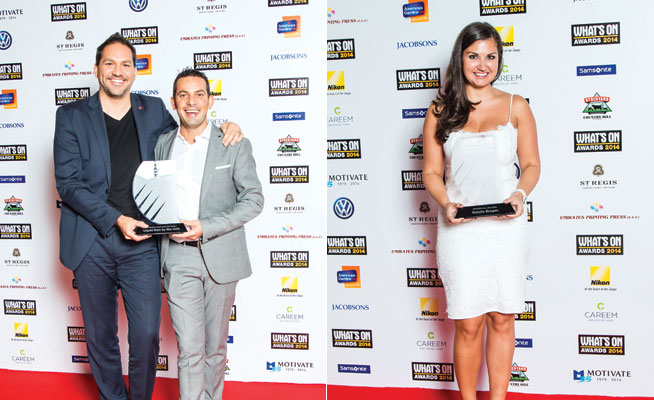 Eat & Drink
News
Nightlife
Restaurants
Salaam!
Sport & Fitness
EDITOR’S PICKS
So, when is the next UAE public holiday in 2021?
READ MORE
All of the lavish new hotels set to open in Dubai in 2021
READ MORE
16 of the best pool passes in Dubai that are fully redeemable
READ MORE
All of the restaurants at West Beach, Palm Jumeirah
READ MORE
MOST POPULAR
7 reasons why Fouquet's needs to be top of your dining bucket list
Hit the pause button with this three-day retreat by 3 Elements
Quarantine requirement for Abu Dhabi tourists will likely end by July
9 cracking Dubai roast dinners with drinks included
Ras Al Khaimah reveals 20 new attractions coming to the emirate
YOU SHOULD CHECK OUT
Our website uses cookies and other similar technologies to improve our site and your online experience. By continuing to use our website you consent to cookies being used. Read our privacy policy here.