Pizza di Rocco
How long they said it would take: 30 to 45 minutes
How long it actually took: 42 minutes
Pizza di Rocco is regarded by many as one of Abu Dhabi’s best spots to grab a piece of pie. Our lunchtime order consisted of two pizzas: the diavola and the verdure. The former was exemplary and proof that sticking to simple ingredients is often best. Big discs of spicy salami covered a thin crust with cheese and some oregano. The verdure in contrast was a bit of a dud. The abundance of veg (mushrooms, onions, olives and aubergine) sounded great, but there was so much it turned the whole pizza into a sloppy mess. Less really would have been more. A nice touch was receiving a call from the restaurant hours later to ask for feedback. 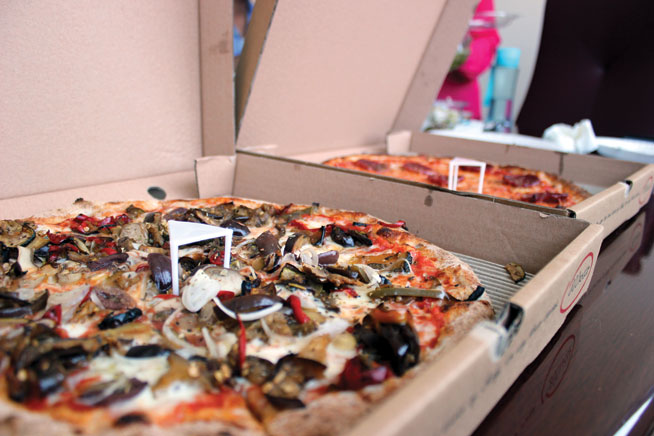 Biancorosso
Italian pizzas cooked by Italians, and the super-thin crusts are good. Try the parmigiana with aubergine, turkey breast and parmesan.

Pizzeria Olivella
We’ve found the service here to be a little on the wayward side when dining in, so getting a pizza delivered is a good compromise as the food is excellent.

Mono
How long they said it would take: 45 minutes
How long it actually took: 43 minutes
The perky, joking voice at the end of the line wasn’t joking about the delivery time. It was almost correct to the minute. The portion sizes here aren’t to be mocked, either: we were given enough food to last three days, thanks to a tonne of extras including flatbreads, pickles, salads, garlic sauce and tabbouleh. Mono’s mixed grill is a decent bet for a takeaway order (the meat wasn’t stringy or dry), although the chips arrived cold and soggy. We ordered a plate of falafels that were the size of golf balls, and were delighted to see we’d been given a bigger portion than stated in the menu – we got 15 instead of 12. They were a tad dry on their own, but leapt into life when added to the hummus and wraps. The quality of the packing was also excellent, no spillages here, and, with the bill coming in at Dhs75, we’d class it as a bit of a bargain. 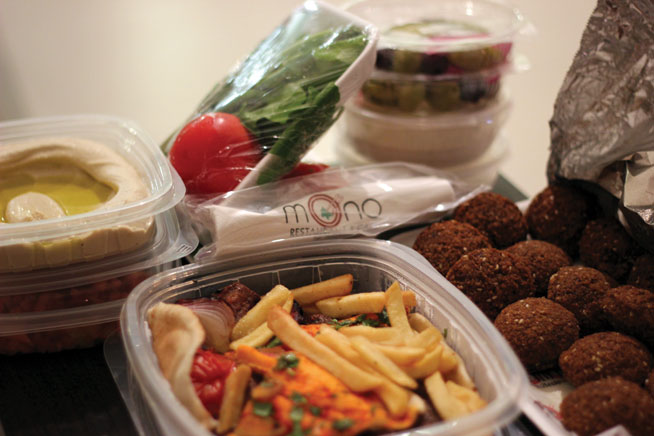 Mora Levantine
Quirky service at this Levantine eatery, but the food’s well made and it’s wallet-friendly. The shakshouka, traditionally a breakfast dish of scrambled eggs with tomatoes, is a great option.

Urban Bites
How long they said it would take: 30 minutes
How long it actually took: 28 minutes
All those rich, calorific buffets at iftar can take their toll on your body. But if you’re at home and fancy banking a few calories for your next feast, Urban Bites delivers healthy sandwiches, pasta and noodle dishes. Try the fusilli, which is a big circular tub of pasta served cold with aubergine, courgette, butternut squash, onion, pine nuts and walnut pesto. We also ordered the soba noodles, a colourful but bland dish only rescued by a spicy coriander dressing. The wholemeal ciabatta with chicken and avocado was a hearty, fresh sarnie, which wasn’t sloppy or smothered in mayo: it’s worth ordering in for lunch if you’re not fasting this month. Urban Bites left us with a smile on our faces. The food is filling and healthy. 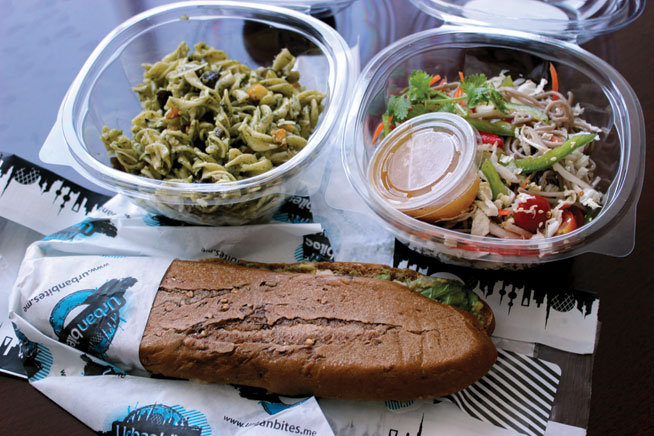 Slices
Choose from a massive selection of salads and sandwiches at Slices. Plus, they do power smoothies with whey protein.

Bite Rite
On a diet? Bite Rite’s menu even includes the calories of dishes on it, from omelettes to turkey patties and grilled sandwiches to pizzas.

Hanoi Naturally
How long they said it would take: 45 minutes
How long it actually took: 23 minutes
A polite and efficient telephone manner and an even more efficient service form Hanoi, who were knocking on our door in half the quoted delivery time. This Vietnamese restaurant has built up a reputation for serving quality grub in Abu Dhabi minus the calories. The caramelised ginger chicken was incredibly fragrant and the meat was bouncy and soft. The colourful lemongrass and chilli tofu dish tasted sweet without being sickly and was again swamped with veg. There’s unfortunately a minimum spend on deliveries of Dhs100, so we bolstered our order with a sweet potato shrimp patty, which was cold, limp and a let-down compared to the rest of the order. 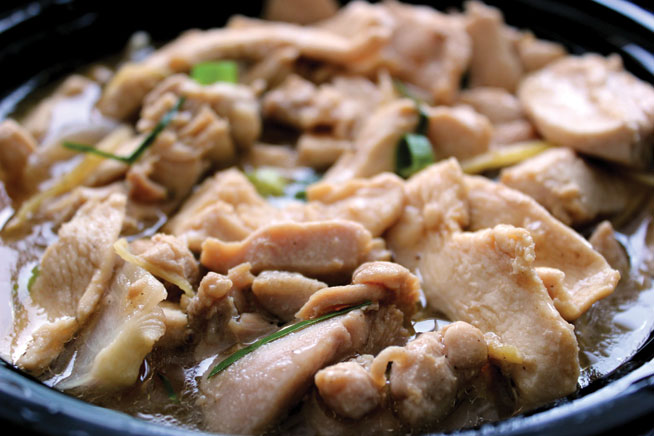 The Noodle House
Good food, although portions could be bigger considering the steep prices. The Thai style chili prawns with basil are a must-try.

Kawloon
Recently reopened after a refurb, the specials are a sight to behold here at Kawloon, especially the whole garlic lobster on a plate.

Lemongrass
How long they said it would take: 45-60 minutes
How long it actually took: 48 minutes
If you have rumbling tummies, then Lemongrass won’t be for you. The portion sizes for some dishes are not just small, they’re miniscule, which considering the prices might leave a sour taste in your mouth. Lemongrass’s pad Thai might also leave a sour taste, and we found it a tangy disappointment with not enough peanuts or egg for our liking. We fared better with the spring rolls, though: they’re sturdy and full of delicately shredded veg – a dip into some plum sauce will perk up proceedings. The chicken red curry raised the whole meal, although we’d have liked the sauce to have delivered more of a kick and been thicker. You might have to order two rice portions with your meal, though, as they’re so small ours was gone before we’d eaten half of the curry. There are good dishes here but you’ll need recommendations, or repeat orders, to find them. 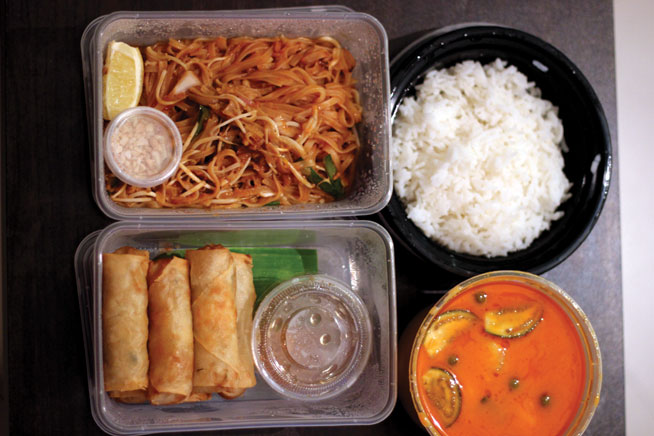 Thai Express
Another Thai in a mall but the menu here is varied, featuring a few dishes we’d not seen before. Make sure you order the papaya salad with shrimp.

Grand Central
How long they said it would take: 30 minutes
How long it actually took: 34 minutes
A deluge of recent openings means its reputation as the city’s most talked about burger joint might be under threat, but Grand Central still serves satisfying patties. We ordered a beef burger with cheddar, onions and mushrooms, plus a veggie burger with a portobello mushroom, cheddar and a fried egg. A portion of sweet potato fries rounded off proceedings, which, while nicely cooked (crunchy on the outside, soft within) lacked pizzazz. The meat burgers here are always of a very high quality, neither greasy nor sloppy, and extremely well made. But it didn’t take long for the veg option to disintegrate into pieces in our hands, and we were left wondering if there were a few too many ingredients involved. Our only issue was with the food’s temperature – the burgers were lukewarm and the fries cold by the time they arrived. 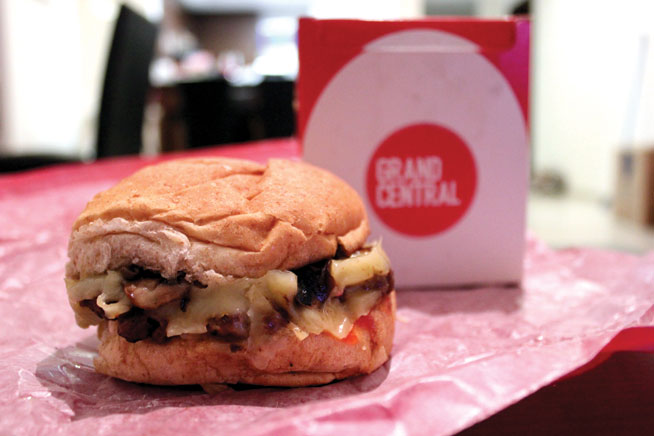 Burger Hood
An enormous selection of burgers, sliders, hotdogs and Philly steak sandwiches – that hit dish from Philadelphia, USA, can be had here.

Burger Bureau
The standard here can be hit and miss, but it’s great when they get it right. A diverse menu includes build-your-own burgers, plus unexpected dishes such as salt and pepper squid.

Cantina Laredo
How long they said it would take: 45 minutes
How long it actually took: 41 minutes
Ordering here was an awkward affair, as it was clear we were speaking to a call centre and not the restaurant. The lady taking our order had little knowledge of the menu and had to call us back when we asked questions about the dishes. The food fared better, though. The vegetarian quesadillas and the chicken fajitas with soft corn tortillas were both winners. Portion sizes were huge and could easily serve four. The food didn’t feel too unhealthy: the quesadillas were served with loads of carrot, onion and broccoli. We ordered a side of guacamole only for both dishes to arrive with their own side of the dip. 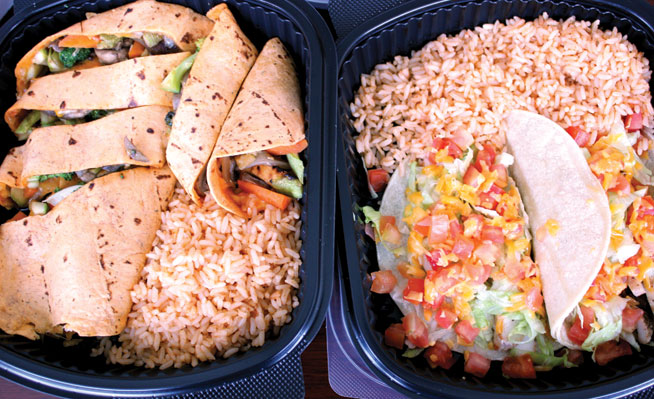 Chili’s
You’ll find tacos and quesadillas on the menu at this chain from America’s southwest. Try the trio of fajitas.

TGI Fridays
Another American chain with plenty of Tex-Mex dishes, including nachos, fajitas and quesadillas.

Lazeez
How long they said it would take: 60 minutes
How long it actually took: 30 minutes
A big round of applause for the friendly staff at Lazeez, who managed to deliver in half the time they estimated. But a curry in a hurry needs to taste good as well, and Lazeez’s dishes proved to be pleasing enough. To start we tucked into a bhel puri (puffed rice, vegetables and tamarind sauce) and dahi papdi chat (yoghurt with potatoes and small crunchy pieces of deep fried bread, tamarind chutney and chilli powder). The bhel was disappointingly sharp and sour, but the papdi was a knockout dish, with a great consistency: the yoghurt and the spuds made sure it didn’t taste too sweet. Big is beautiful at Lazeez, it seems, as all portions were substantial and weighty. The murg tawa masala had huge chunks of chicken off the bone, plus garlic the size of onions. The palak paneer makai was packed with giant pieces of paneer in a thick creamy sauce. Lazeez’s food also arrived piping hot and the delivery man refused to take our tip. One word of warning: the food is piping hot in more ways than one: our taste buds were on fire by the end of the meal. 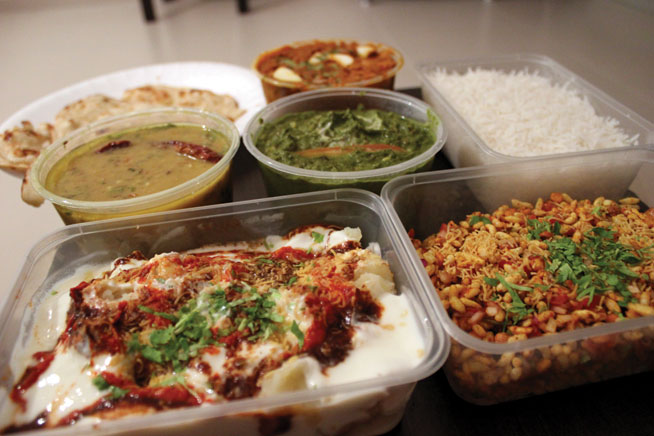 Biryani Pot
Posh Indian in The Galleria, which also delivers. Try the excellent, signature biryani in a pot, which comes with a bread roof.

Chhappan Bhog
There’s a street food vibe to the menu here. The dosas are magnificent and they also sell a huge selection of Indian sweets.

Fresh Way
How long they said it would take: 40 minutes
How long it actually took: 38 minutes
A bit of a hidden gem, but it comes with a warning: the ordering process can be tricky. When we called, most items on the menu weren’t available, meaning our telephone call lasted almost 10 minutes. However, what they did have made it worth the hassle. The shrimp tempura is great value: two jumbo prawns, plus plenty of battered aubergine, carrot, okra and courgette. The sushi was immense – the chunks of salmon and tuna nigiri were so big they smothered the rice like a duvet. The rainbow nori maki was equally as plump. With a bit more TLC given to the menu, this could become the go-to place in the city for sushi. 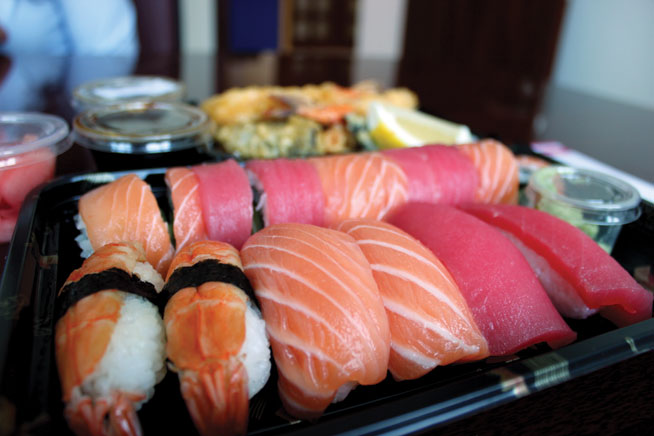 Sushi Central
A well-established Japanese joint – the gyoza and salads are good.

Eat & Drink
News
Restaurants
Salaam!
EDITOR’S PICKS
Here's the full list of UAE public holidays in 2023
READ MORE
23 incredible things to look forward to in the UAE in 2023
READ MORE
Hidden gems: 10 UAE desert pop-ups to discover this winter
READ MORE
Where to travel in 2023: 10 new flight routes from the UAE
READ MORE
MOST POPULAR
With its unique decor, Dubai's La Nina restaurant evokes tales of distant travels
Reservations are now open for French restaurant Fouquet's Dubai
The colourful Sharjah Light Festival returns next week
Relive those cosy winter moments at Chalet 105 at Twiggy
There are some big road closures in Abu Dhabi this weekend
YOU SHOULD CHECK OUT
Our website uses cookies and other similar technologies to improve our site and your online experience. By continuing to use our website you consent to cookies being used. Read our privacy policy here.