What’s On and Hype preview Damian Lazarus at new nightclub in Dubai Provocateur at Four Seasons Resort. Find out more things to do in Dubai.


Right at the time when house music went from being a niche interest to a more mainstream lifestyle choice, Damian Lazarus’s Crosstown Rebels was there. Having already had one early incarnation that ended in the label briefly folding, only for it to come back bigger and better, the second coming of Crosstown saw an explosion of interest in club culture around the world, not least in part thanks to the A&R work of Damian himself.

2010 was something of an annus mirabilis for the LA-based Brit. As well as introducing the world to hot new acts like Art Department – who have since gone on to become global stars in their own right, gracing the front cover of Rolling Stone and headlining at Glastonbury – he began touring the world under the Rebel Rave banner (alongside pin-ups like Seth Troxler, Jamie Jones and less spotter artists Deniz Kurtel and Glimpse) and pretty much has never stopped since. Everywhere Damian went, increasingly large legions of fans followed the free-spirited, cape wearing and make-up sporting DJ and producer.

That year also saw the Londoner’s own DJ skills catapulted into the spotlight more than ever before when he mixed one of the most coherent fabric CDs in recent memory. Showcasing an expected eclecticism, fabric 54 was rich with deep dancefloor magic from the outer realms of the house sphere and, since then, Lazarus has become something of a pin-up for alternative, spiritual, mystical house music fans. But it didn’t happen overnight.

As a child Damian was into classic pop, before graduating to house, hardcore and jungle at university. Before long he ended up as Music Editor then Assistant Editor at Dazed & Confused and then around the turn of the millennium took up a post a London Records before becoming A&R at the City Rockers label. It was there his knack for unearthing a tune first became apparent, with Felix Da Housecat’s Silver Screen Shower Scene and Tiga & Zyntherius’s Sunglasses At Night some of his earliest finds. 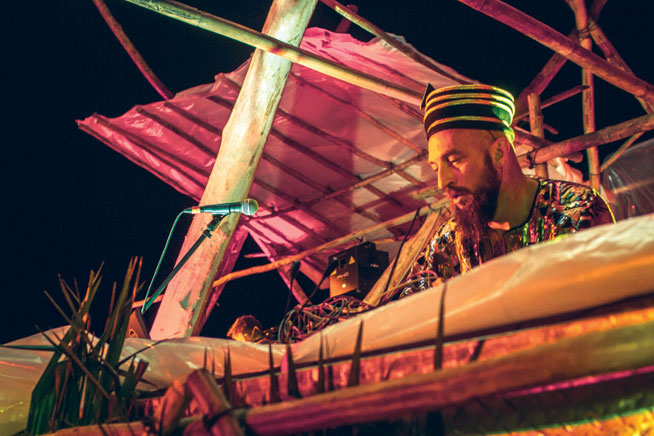 “I still like the old-school A&R ways; meeting people before agreeing to sign them, properly checking music before making any decisions and so on,” says Damian. “I go and see as many bands, producers and DJs as possible. It feels great to discover or have a hand in helping a new career develop.”

His own career received a big boost in 2002 when he played at Barcelona’s Sonar Festival. Impressing from the off with his curveball selections, unique sense of DJ charisma and ability to thread together many different strands of music, not just dance beats, he soon got tapped up for a residency at the world renowned Circo Loco at DC10 in Ibiza. The rest is history, and in the last month alone Damian has played in 11 different countries without returning home to LA even once.

Ever since 2008, he has also taken the time to record his own podcast series – the Lazpod – and it has become a cherished listen for those looking for some outlier thrills. Full of weird drone, dark pop, ahead-of-trend dance and various strands of world music, it stands as testament to his restless search for new music, influences, sounds and scenes.

As a producer, Damian has also served up standout full lengths on Get Physical that fuse electro with downtempo, disco with leftfield electronica and swathes of experimentalism. Although he has largely focussed on A&R in recent times, turning Crosstown into something of an in independent behemoth that marries big names like Dave Angel, Skream and Mathew Jonson with initially little known producers like Fur Coat, Maceo Plex, Ali Love and even Kele Okereke from Bloc Party, Damian’s currently working on a new album. As ever, it is far from a standard tech-house opus, and instead it is set to introduce the world to the transcendental singing of qawaali, a genre of devotional music popular in south Asia.

“There are many parallels between qawaali and house and techno music,” says Damian. “The repetitive loops, the breakdowns, the near-zoning out moments and the uplifting drops. Most qawaali tracks last around 12 to 14 minutes and they have a particular arrangement. What also drew me to it was the idea of both vocal harmony and vocal battles taking place within the songs and that these songs were, on one hand, simple love songs and, on the other, spiritual odes to the deities.”

The album is sure to be another eye-opening musical experience that will remind people once again that there can, and should, be more to dance music than slavish replicas of Kerri Chandler chords or Todd Terry kicks. For an early taster of tracks from it, you’d best head to new Dubai club Provocateur this weekend when Damian comes to town with his bottomless bag of musical treats.

Clubs
News
Nightlife
Things to do
EDITOR’S PICKS
Exclusive Reveal: Topgolf Dubai is here and ready for action
READ MORE
65 of the best outdoor bars and terraces in Dubai
READ MORE
7 brilliant dining deals in Dubai this month
READ MORE
18 of Dubai's most Instagrammable breakfast spots
READ MORE
MOST POPULAR
The stunning Hermès Carré Club is now open in Alserkal Avenue
Pics of the week: Your best photos of the UAE
Watch: A look inside Conor McGregor's Dhs20,000 per night Dubai villa
Discover the art of yoga at Louvre Abu Dhabi
Exclusive reveal: Off the Wall is an artsy, one-of-a-kind cocktail bar in Dubai
YOU SHOULD CHECK OUT
Our website uses cookies and other similar technologies to improve our site and your online experience. By continuing to use our website you consent to cookies being used. Read our privacy policy here.