Fifty Shades Of Grey WON'T be released in the UAE

What’s On has details of the decision by distributors and National Media Council to pull Fifty Shades Of Grey from cinemas in Dubai and UAE.

The most-talked about film in the world right now will NOT be screened in the UAE.

Fifty Shades Of Grey, which was released in Europe and the United States on Valentine’s Day weekend, is adjudged to have too many ‘inappropriate scenes’, with more than 35 minutes was cut on first look.

According to a report in 7Days, distributors for the movie, Four Star Films, had taken the decision to pull it from schedules after more than a quarter of the 125-minute running time was deemed worthy of censure. Such a move, it has been said, would detract from the essence of the film.

Juma Al Leem, director of media content at the National Media Council, told the paper: “We reviewed the movie in the presence of the distributor and after he realised how many inappropriate scenes there were, he took the decision not to show the movie himself, before we were able to make a decision.

“The movie had many inappropriate scenes, around 30 to 35 minutes of explicit scenes. Some of the explicit scenes were around seven minutes long each.” 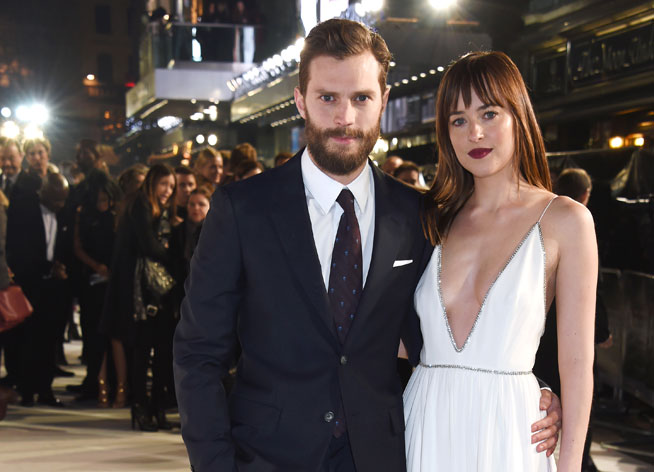 Fifty Shades is the big screen adaptation of the literary world’s worldwide phenomenon by the same name, written in 2011 by British author E.L. James. It tells the story of the sexual relationship between an aspiring journalist (Anastasia Steele, played by Dakota Johnson) and a billionaire businessman (Christian Grey, played by Jamie Dornan).

The Sam Taylor-Johnson directed feature earned in excess of $150m (Dhs550 million) in its first three days across America and Europe, making it the second-biggest international opening for Universal, behind Fast&Furious 6. The sum is the highest ever for an R-rated film.

This comes despite very mixed reviews from critics, including “Fifty Shades of Grey’s biggest sin is being incredibly boring” from one blogger. The New York Times gave it two-and-a-half stars.

The decision in the UAE follows that of Malaysia, Kenya and Indonesia, who have also banned its release.

This isn’t the first time Dubai audiences have had to deal with scene cuts. In January 2014, about 45 minutes had been cut from the three-hour blockbuster, The Wolf Of Wall Street for Dubai audiences – that’s nearly a quarter of the film – leaving many viewers outraged and confused about the sequence of events.

Culture
Film
News
EDITOR’S PICKS
Exclusive Reveal: Topgolf Dubai is here and ready for action
READ MORE
65 of the best outdoor bars and terraces in Dubai
READ MORE
7 brilliant dining deals in Dubai this month
READ MORE
18 of Dubai's most Instagrammable breakfast spots
READ MORE
MOST POPULAR
The best restaurants at The Pointe with Palm Fountain views
Tough Mudder returns to the UAE this February
This family staycation includes daily tickets to Dubai's top attractions
Britain's Got Talent's hilarious improv troupe to perform in Dubai
The best restaurants on Abu Dhabi’s Hudayriyat Island
YOU SHOULD CHECK OUT
Our website uses cookies and other similar technologies to improve our site and your online experience. By continuing to use our website you consent to cookies being used. Read our privacy policy here.