What’s On announces a Ruben Sanchez art project in Dubai. The five-day project for graffiti in Dubai has been created by ING Creatives.

Leading graffiti artist Ruben Sanchez will spend five days painting a giant mural in JLT this month, and he wants your support.

The Spanish-born painter has exhibited all over Europe and the Middle East, and represents Tashkeel as far afield as Serbia, Germany and Jordan.

This weekend’s open art event, though, is one of the largest he has undertaken. Starting on February 13, it is being launched by ING Creatives, a Dubai-based non-profit group who, according to their official information, ‘endeavours to cultivate communities where creatives inspire each other, network and generate change through workshops, talks and creative events around the city.’

The Creative Community Wall will be at Lake Level, V3 Tower, Cluster V. It is the first of several major events the group hope will really accelerate the emirate’s development into a leading creative hub for the region. Amongthem is a two-day conference featuring top speakers from around the globe. 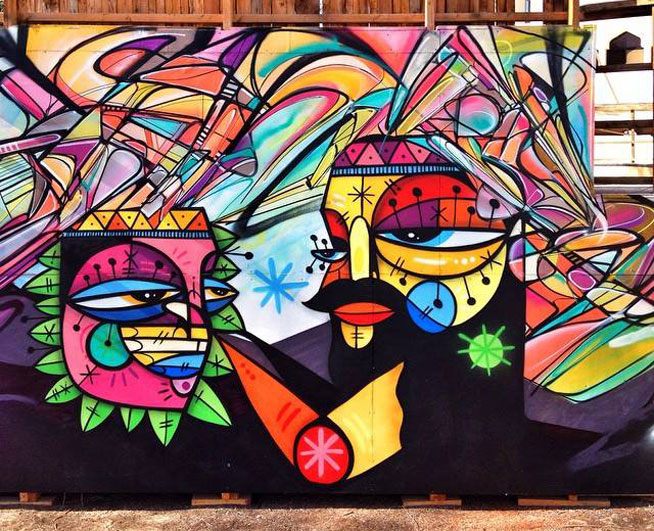 The JLT Creative Community Wall project comes just a few months after Dubai broke the Guinness World Record for the longest graffiti scroll at 2.2454km. ‘Rehlatna’ (Our Journey) was launched in celebration of the 43rd National Day of the UAE and involved 150 national and international graffiti artists, 7,000 spray paint cans. It stood proud at Jumeirah Beach Park for a month and become a popular destination for tourists and locals. It is hoped the JLT project will be much the same.

Street art’s boon in the region also saw a special exhibition featuring the works of one of the most artists of his generation launch at Opera Gallery in DIFC. The works of SEEN showcased the icon’s superhero pieces. Known as the ‘Godfather of Graffiti’, SEEN, real name Richard Mirando is a Bronx-born street artist whose works have decorated New York City for more than five decades, both as an individual and as part of the UA (United Artists) crew. With pals Pjay, Duster, Sin and Mad, the group were renowned for their complete takeovers of train carriages, painting the outside from top to bottom.

Art
Culture
News
Things to do
EDITOR’S PICKS
What’s On Nightlife Awards 2021: Here are the nominees...
READ MORE
It's back! What's On Lock In returns to Media One Hotel
READ MORE
Arts and culture: 5 spots we can't wait to visit at Expo 2020 Dubai
READ MORE
UAE petrol prices are set to decrease in September 2021
READ MORE
MOST POPULAR
Pics of the week: Your best photos of the UAE
A stylish new Southern-European Neo Bistro is opening in Dubai
Staycation at this stunning hotel which is now dog-friendly
Get an Expo 2020 Dubai monthly pass for Dhs95 valid for the whole of October
New films to watch in cinemas this week: September 23 to 29
YOU SHOULD CHECK OUT
Our website uses cookies and other similar technologies to improve our site and your online experience. By continuing to use our website you consent to cookies being used. Read our privacy policy here.