What’s On teams up with Hype to preview Julio Bashmore live in Dubai for Warehouse Dubai, at XL Dubai, Habtoor Grand Beach Resort on Feb 26.


Julio Bashmore has always been a slightly elusive figure. Before his big breakthrough with house-meets-bass anthem Au Seve in 2012, Bashmore, born Matt Walker, was another young, hungry DJ cutting his teeth in the Bristol scene. The track, coming on the back of previous underground hits like Battle For Middle You, was a worldwide smash, popping up in the set-lists of everyone from Diplo to Tiësto to EZ to Claude VonStroke to Soul Clap, and catapulting him to the status of in-demand DJ with all the high-profile international gigs that entails. Yet he’s still, for the most part, managed to stay out of the public eye.

Matt is adamant that his lack of interviews and the few known details about his life aren’t due to any distrust or even disdain for the media and public. “I don’t do interviews unless I have something to say,” he explains. “It sounds really basic, but I’ve never really been involved playing the game.”

The youngest of three boys, Matt was first drawn to music when he heard his father playing Pink Floyd and Michael Jackson in the family’s Bristol home. At 13, he began making his own music. One of his older brothers brought home a pair of decks, which – combined with a Reason-equipped computer Walker was gifted two years earlier – allowed him to make amateur remixes in his bedroom. “It kind of clicked because I’ve always been into computer games and stuff like that,” he recalls. “At that point, it was just another computer game to me. I was really into making bizarre stuff, and coming from that angle it was a game and it was fun.”

A detour in his teens saw him playing lead guitar in a synth-pop band, but a major pivot came when he first heard LCD Soundsystem. James Murphy and company helped Matt realise that the worlds of dance and rock could be fused. Soon enough, he was ready to move back into the electronic sound that marked his early teens. But before anything else, the budding DJ decided he needed a new stage persona. After mulling it over, he decided on a name that would throw everyone off. “I knew it had to sound Latin, because I liked the idea of turning up to a show and people having listened to my music and booking me and expecting a tall, dark, handsome Latino man,” he says with a laugh. “Then they get this pasty, ginger kid from Bristol. I thought that was pretty funny.”

While many of his friends were hitting the pubs and clubs on weekend evenings, the teenage Bashmore stayed at home, carefully cultivating new arrangements or tweaking an already existing track. “It may have looked weird to be at home on a weekend night sitting on your computer at that age,” he recalls with a smile. “But for me, my socialising time came when I had a gig.”

By 2009, his dedication and obsessive attention to detail with music paid off. Although he was entering his twenties and had just completed a two-year course in music, Matt had mapped out a five-year plan, which was to go to university and study music, then spend a few years trying to get signed to Dirtybird Records. One week later, he received an e-mail from Dirtybird boss Claude VonStroke, who wanted to ink him to the label. 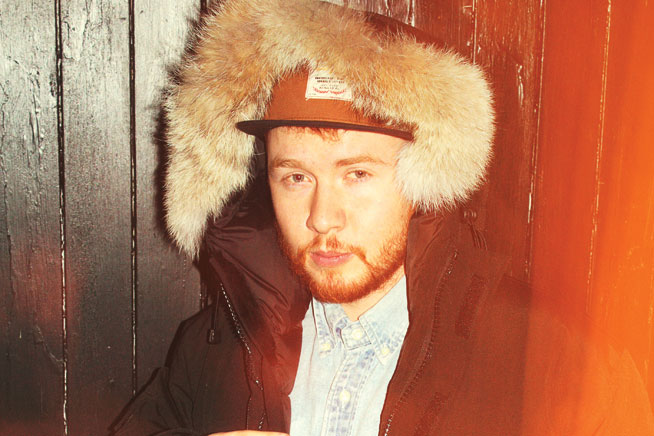 Julio Bashmore built a steady, reliable following in the coming years. He established himself at the forefront of the revival/retooling of house, and when Au Seve hit, it propelled him into the stratosphere. He moved out of his parents’ home in Bristol over two years ago and bought a home in South-East London, while maintaining a rigorous touring schedule to capitalise on his burgeoning fame.

But fame hasn’t made him a different person, he insists. He prefers hanging out in London and living his life as he normally would. It’s only when he decides to take his Fiat for a spin through central London and hears his music blaring from other cars that his success intrudes on his daily life.

He understands that people perceive him as withdrawn, reclusive and even a bit mysterious. In reality, he’s easy to engage with: quick-witted, and at times self-deprecating. He revels in his geekdom, though it’s hard to notice on a surface level. For instance, take his huge retro house anthem Battle For Middle You, for which he cut up a medieval-style theme on a flute and sprinkled it in the background of the track. Between that and his love of computer games, he’s sure that “people will see what a nerdy geek I am”.

Following Au Seve, the demand for an album heightened, with the big money offers rolling in. Instead, Matt kept himself busy with other projects – like Velour, his collaboration with Hyetal – and started his own label in Broadwalk Records. His production on Jessie Ware’s hugely successful debut album Devotion allowed him to focus on a sweeter, poppier sound, as opposed to the full-on club music he’s known for.

“It’s not that I’m a recluse, but I enjoy my ‘me time,’” he says. “Look at any electronic producer. They will have had to go through a period where they’ve been completely anti-social. So many people I’ve spoken to ask when it happened to me, and I tell them I went a bit weird for a couple of months and made a load of music. That’s true for so many people in this game.” To illustrate his point, he pulls out his iPhone and points sheepishly to 12,404 unanswered e-mails. “I try to keep up,” he says, with a shrug, “but it’s just too hard.”

His long-awaited forthcoming album, which blends the old Detroit sound with dirty, sweaty house music, coincides with a musical reawakening. For a period, Matt says he felt uninspired by the house scene and was forced to look backwards at releases from the ’90s for the necessary creative spark. He credits his reinvigoration to hearing (and later signing for Broadwalk) the unpolished house music of Funkineven, which he says made him willing to re-engage in music again. His recently released track, Kong, sees him hook up with singer Bixby for another glowing ray of house, and follows on from the dreamy Simple Love and funk-soaked Rhythm Of Auld unveiled at the end of last year.

Talking honestly about his album delay, Matt admits: “There’s no real reason for the gap other than me just taking a long time to make an album. Between playing shows and figuring stuff out, it takes a while to do.” We’re sure it’ll be worth the wait.

Clubs
News
Nightlife
Things to do
EDITOR’S PICKS
13 Sheikh Hamdan-approved restaurants in Dubai
READ MORE
Dubai brunches temporarily banned in new preventative measures
READ MORE
12 upcoming Dubai mega-projects we can't wait for
READ MORE
16 of the best beach bars in Dubai for sundowners
READ MORE
MOST POPULAR
Breaking: Dubai extends preventative measures until mid-April 2021
Enjoy brunch, breakfast and a stay at Westin Abu Dhabi from Dhs432
Get a free gym class at this cool new Dubai gym
Pics of the week: Your best photos of the UAE
Emirates Airlines and DHA to implement digital verification of traveller medical records
YOU SHOULD CHECK OUT
Our website uses cookies and other similar technologies to improve our site and your online experience. By continuing to use our website you consent to cookies being used. Read our privacy policy here.