What’s On and pals Hype goes behind the scenes of the skate scene in Dubai as Ty Evans shoots his latest film of skateboarding in Dubai.

Local skater Karim Nassar is involved in a new skating movie being shot in Dubai by legendary skate movie director Ty Evans. Here’s his feedback from the thick of the action…

‘We Are Blood’ is the new skate film from the BrainFarm skate team and director Ty Evans, due to hit cinema theatres mid-August. Dubai has opened its arms and welcomed ten of the best skaters in the world to skate at any spot they wish for the film. P-Rod, Sean Malto and Theotis Beastly are amongst those going buck wild on the streets of the city as we speak. UAE skater Karim Nassar is also travelling with the crew as they go about town capturing “an extremely deep and prophetic cinematic experience”.

How is it travelling with these guys, some of whom are the best skaters in the world? It’s pretty surreal and it’s cool to see that no matter where you are in skateboarding, we are all skaters, and everyone just vibes off each other. They are killing it and, really, it’s good times. 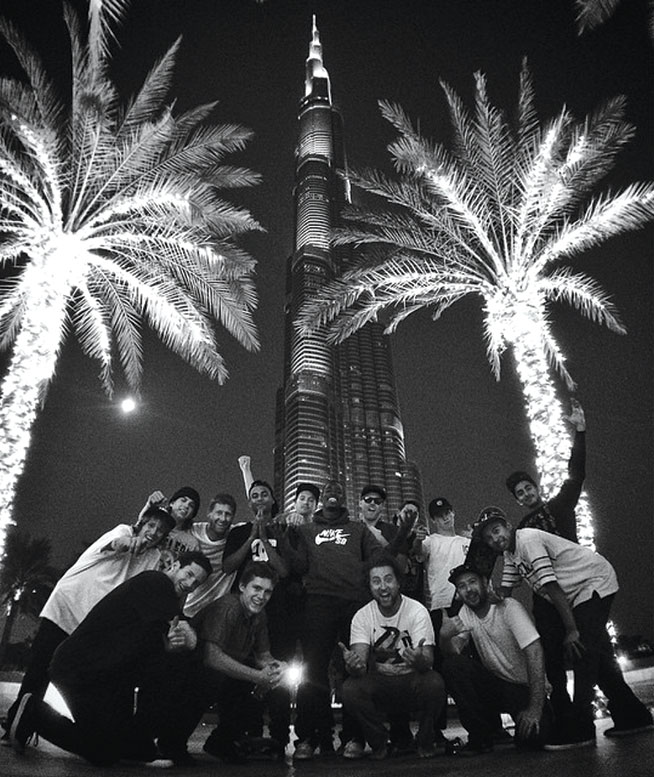 What kind of equipment is being used on this film shoot that has never been used before to film skateboarding? Some serious next level Star Wars/Jetsons shnizzle. The crew has been using cinabots, the shotover, the ultimate arm, the techno crane, the Phantom 4K camera – enough equipment to get movie camera geeks excited.

What was it like travelling with Ty before the crew got here? If you can picture a day with Batman, that’s a day with Ty Evans. He is the cheeba-hawk of skate spot finding. It was relentless and we ended up pulling an all-nighter. It was so worth it though.

Are you trying to get your shine on? If an opportunity presents itself, then I don’t see why not. I’m just trying to enjoy myself, make some homies and have a sick time.

We heard you tre-flipped the water gap at DIFC on film. Yeah, but it felt like it took at least 500 or more tries. It took forever, as I was trying to go Mach 5, and I’d never skated this fast in my life. I fell in the fountain four times. It was so weird skating with six cameras turned on me, especially the techno crane. I was pretty nervous, but after the 375th take I didn’t really mind it.

Culture
Film
News
Outdoor
Salaam!
Sport & Fitness
EDITOR’S PICKS
Here's the full list of UAE public holidays in 2023
READ MORE
23 incredible things to look forward to in the UAE in 2023
READ MORE
Hidden gems: 10 UAE desert pop-ups to discover this winter
READ MORE
Where to travel in 2023: 10 new flight routes from the UAE
READ MORE
MOST POPULAR
The UAE law changes on marriage, divorce and child custody to know about from February 1
5 fabulous new Dubai hotels to check-in to
Pics of the week: Your best photos of the UAE
Dhow & Anchor has got you covered every day of the week
RTA: All the road closures you need to be aware about
YOU SHOULD CHECK OUT
Our website uses cookies and other similar technologies to improve our site and your online experience. By continuing to use our website you consent to cookies being used. Read our privacy policy here.