Two can eat for Under Dhs100

What’s On details the best restaurants in Abu Dhabi when eating on a budget. Find out excellent cheap eats for breakfast, lunch, dinner.


You can feast on good food in the capital without breaking the bank. Try these 28 restaurants, where two people can fill up for under Dhs100…

Wheat
Le Royal Méridien’s café concept is a neat place to meet a friend for breakfast and the portions are big enough to keep your belly from rumbling until well into the afternoon. Try the hefty, although very sweet, blueberry Bircher muesli (Dhs28) and the Bakers’ Breakfast for Dhs35 (two toast, veal bacon, poached eggs, tomato, béarnaise sauce). You’ll still have change from a hundred to get some of the outlet’s excellent banana bread or raid its in-house bakery for some portions of pumpkin bread or rock sugar brioche twist. 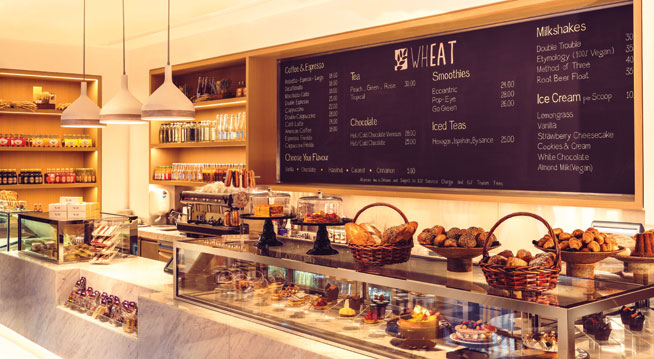 The One
Eating in a furniture shop showroom is a slightly surreal experience, but two people can scoff breakfast here for under Dhs100 – just. Start off with a veggie blend fruit drink or iced tea (Dhs18 to Dhs20) and tuck into a hefty bowl of muesli with sweet cous cous (Dhs32) and their signature omelette, where you choose your own fillings, for only Dhs31.

Jones The Grocer
It is possible to tuck into brekkie and save a few dirhams at this popular Aussie chain. The new addition to the menu, the coconut porridge served with a banana and butterscotch compote (Dhs26), is hearty and fillling. The eggs on toast here are also very good (Dhs29) and you’ll still have enough to get a Jones’ fruit loaf or croissant each as well. 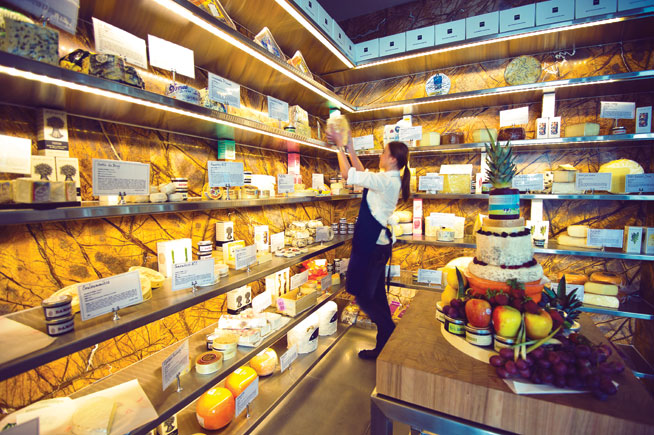 The Living Room
It’s hidden behind a security gate in a compound in Al Khalidiyah, but The Living Room is worth seeking out for the friendly service and wallet-friendly prices. There are absolute steals to be had on the menu, including three pancakes and syrup for Dhs16, turkey bacon and two eggs for Dhs28, crêpes for Dhs16 and a fried egg sandwich for Dhs10.

Mora Levantine
Two people can start the day for less than Dhs100 at this quirky little location in Al Zahiyah. Dishes from the breakfast menu won’t cost you more than Dhs20: try the shakshouka (eggs with chilli, tomatoes and loads of flatbread) or the omelette with vegetables. You’ll still have plenty of money left over to spend on their maneesh (which cost as little as Dhs6) and some soft drinks.

Hippy Chic
If you live in Khalifa City, you can get breakfast with a mate and still make savings. A portion of chilli corn fritters with scrambled eggs will set you back Dhs24, while the pancakes with maple syrup only cost Dhs22. You’ll have enough left over to get some porridge for Dhs28, drinks or a plain croissant for two at Dhs9 each. 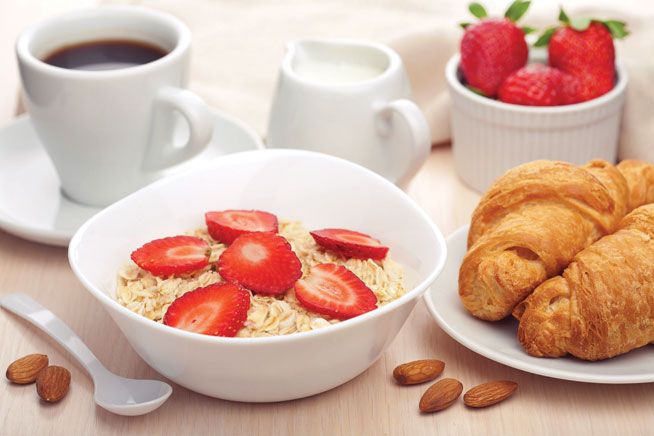 Shawarma Time
The sandwiches here are an absolute bargain: the Saj, beef and chicken sandwiches only cost Dhs15 each, and the Shawarma Bites (three cheese buns with chicken or beef fillet and veg) only cost Dhs20. There’s several deals on the menu as well, including the Shawarmatain meal: you get two shawarma sandwiches plus a soft drink and it’ll only cost you Dhs25.

Ya Zaien
Head here for pizzas priced between Dhs8 and Dhs22, pastries such as egg with Kraft cheese at Dhs7, labneh with mint at Dhs6 and fruit juices and milkshakes for Dhs10 each.

Nando’s
You can order a portion of olives (Dhs12) and hummus (Dhs16) to start and then plough through a quarter chicken meal with two sides and a burger meal with one side. You’ll go home with a dirham in your pocket. 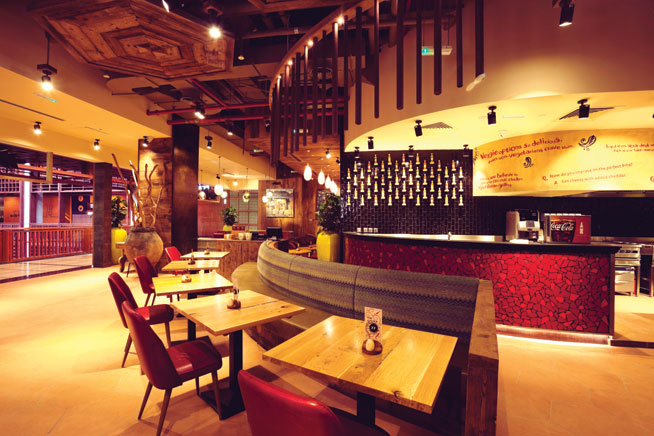 Burger Fuel
This Kiwi burger joint does a gourmet mini menu, meaning you save cash and keep the calories down as well. The hamburgers cost no more than Dhs20, and the meal can be topped off with a portion of the grilled chicken fenders and veggie pumpkin, carrot and chickpea bites. You’ll have cash left over for some fries, or a dessert to share.

SoulFull
The emphasis is on healthy dishes at this Al Muroor eatery. Try the Mexican quinoa salad for Dhs25, with red beans, feta, corn and avocado, plus the tuna and rocket sandwich with cheddar and jalapeño (Dhs25). You’ll still have enough cash from Dhs100 to each have one of their thick, filling smoothies and a side to share, such as roasted veg or potato wedges.

Urban Bites
Head downtown for baguettes priced as low as Dhs28 (try the roasted lamb), pasta dishes between Dhs20 and Dhs25 (the farfalle with shrimps and asparagus is excellent value), and three bean salads at Dhs18. Pudding will only set you back Dhs15 as well: the chocolate walnut brownie is to die for. Some of the capital’s bands often perform here and music organisation White Cube held one of its Metronome events at the end of August. 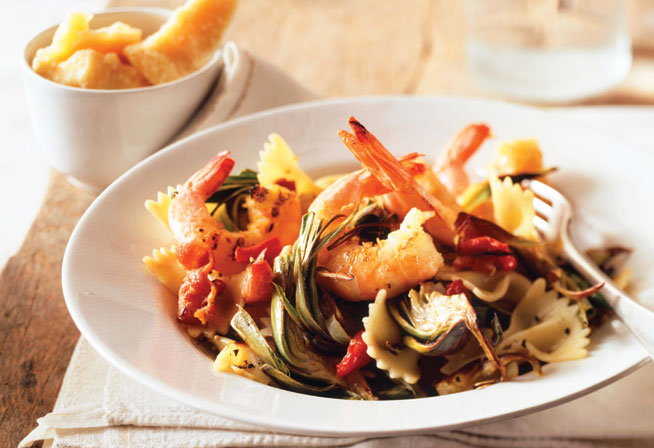 Bite Rite
You can count your cash and watch your weight here: each item on the menu comes with a calorie count. Sandwiches, such as the cream cheese and broccoli, cost on average Dhs21 to Dhs23, and starters such as the spinach puffs with cashew cost around Dhs12 (or try the veg spring rolls with tomato garlic sauce for Dhs15). Soups are well priced too (most cost between Dhs12 and Dhs16), as are the salads. Try the shitake mushroom salad for Dhs20 – it’s a mere 90 calories.

Bonna Annee
Abu Dhabi’s only Ethiopian restaurant serves unique dishes at moderate prices. Try the steak tartare with chilli powder for Dhs30, and the beef stew for Dhs25. Follow that with some shiro (simmered, ground chickpeas in house sauce) and some tibs, (lamb cubes in onion, pepper and Ethiopian spiced butter).

Max’s Restaurant
This Filipino outlet sells sandwiches with fries for Dhs22, soups for as little as Dhs12, and noodle dishes for Dhs24, but the real savings are in its combo meals. You’ll get a main, a side and a dessert from Dhs18 to Dhs38.

Russian Kitchen House Cafeteria
Situated near the Russian Embassy, huge salads here cost around Dhs14 to Dhs18, and dishes such as pancakes with cabbage won’t cost you more than Dhs20. The meat pies at Dhs8 are also worthy of your dirhams. 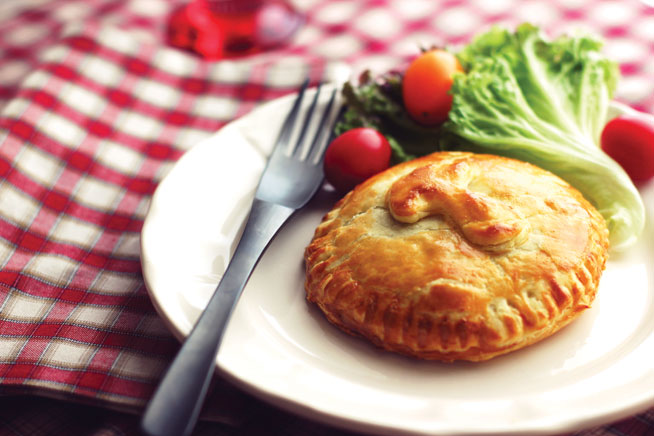 Mono
Dirt cheap Lebanese food but it’s all about the extras: you’ll get plenty of breads and greens to keep you going for a good three days. There are lots of salads on the menu priced around Dhs20 to Dhs25, alongside a huge mezze selection of dishes priced around Dhs15 to Dhs20. Soups are also cheap (Dhs12) as are sandwiches – a shish kebab sandwich is only Dhs12.

Pizza Amore
Kooky surroundings and staff, but the prices here, and the decent quality, means this place is a good pit stop for the budget-conscious. Small pizzas cost around Dhs25 (try the Rustica, with mozzarella, beef, onions and black olives), while salads cost around Dhs22 and soups, including asparagus, will only set you back Dhs14.

HWY 55
Get burgers in Al Muroor at economical prices. Regular sized hotdogs are only Dhs14, burgers are Dhs21, and there are several other bargains such as the grilled pimento cheese on toast (Dhs18) and the chicken sandwich (Dhs23). Fries are a scandalously low Dhs8 and the frozen custard scoop desserts are also good value at Dhs15 each. 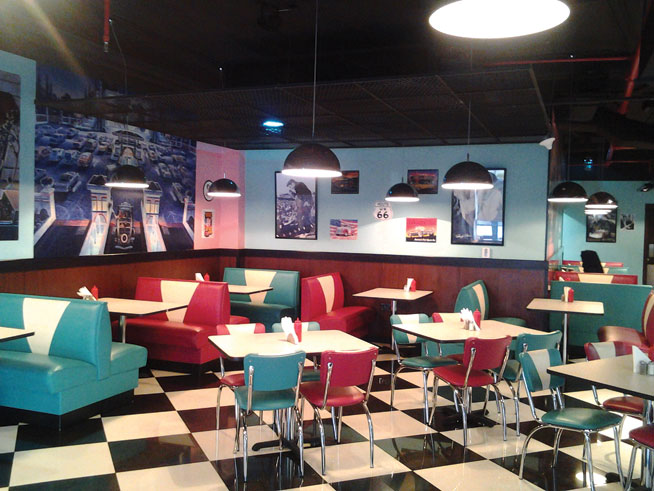 Automatic Restaurant & Cafeteria
Come here for cheap Lebanese dishes from an Abu Dhabi institution. Sandwiches cost a miniscule Dhs5 (try the shawarma) and it sells plenty of grilled kebabs, including shish tawouk and kabbak hallabi for less than Dhs30. Once again, it’s the extras here such as breads and salads that really make it value for money.

De Thali
Upmarket mall food in Madinat Zayed and the staff are extremely friendly. You’ll only fork out Dhs12 for starters such as the samosas and make sure you try the lentil fritters with coconut chutney for Dhs13. Main course tandoor curries are also cheap, with plenty under Dhs25 (try the murgh angarey, chicken with chilli and garlic). The excellent biryanis here are also cheap at around Dhs25 and the vegetable thalis (a meal on a plate) are excellent value at Dhs35 – and will leave you plenty of change for dessert.

Biryani Pot
This Galleria outlet is quickly gaining a reputation for selling some of the best Indian dishes in the city at very competitive prices. The salads are big and a meal on their own, and the spicy chickpea in a tamarind sauce is great value at Dhs15. The name means you’d expect the biryanis to be good and they are, especially the more healthy quinoa veggie version at Dhs44. 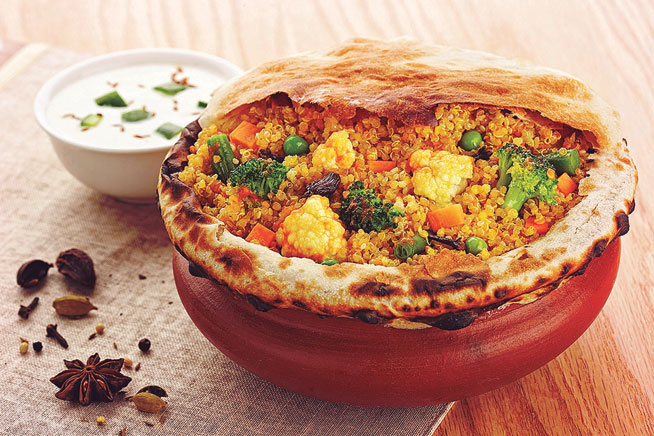 Chhappan Bhog
One of the best value for money Indian chains in the city, Chhappan Bhog sells more than 70 varieties of sweets, snacks, street food style dishes, dosas and curries. With thalis priced as low as Dhs17 and its massive dosas only costing on average Dhs9, two people can easily fill up here for as little as Dhs50.

Istanbouli
Cheap Turkish grub just off Al Falah Street, with mezzes such as hummus and tabbouleh priced around Dhs10 to Dhs15, roast chicken dishes at Dhs30 and desserts at Dhs7 each. Be adventurous and try the grilled quail at Dhs45.

Foodlands
Foodlands does an excellent buffet, but to feast for less than Dhs100, you’ll need to order a la carte. Chaats cost between Dhs16 to Dhs20, and you’ll have to cough up Dhs10 for samosas, while veggies dishes are priced around Dhs25 each, and biryanis are between Dhs22 to Dhs35. Breads are crazy cheap – a naan is Dhs4.

Broccoli Pizza and Pasta
Slices of pizza are available here for Dhs15, and small pizza pies only cost Dhs22. There’s an extensive pasta menu and you can get a lasagne combo meal with a drink and salad for Dhs35. 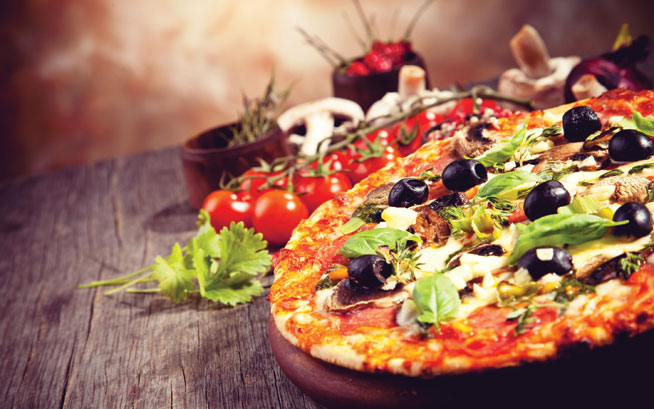 Student Biryani
A second branch in Al Zahiyah will open later this year and big savings can be made if you order a meal deal. For Dhs36 you’ll get a chicken biryani, kheer (rice pudding), a salad, raita, a shami kebab and a can of drink. You can get a chicken Karachi curry, two naan, salad, raita and a drink for Dhs29.

Lebanese Flower
Perhaps one of the most famous Lebanese restaurants in Abu Dhabi, the Flower chain has a cheap mezze menu, with dishes such as hummus, falafels and kebbeh all priced Dhs12 to Dhs15. Portions are big, so if you spend Dhs100 you’ll be taking food home in a doggy bag.

Bandung
One of only two Indonesian restaurants in the city, Bandung serves traditional dishes such as ba’so campur (meatballs with noodles) for Dhs18. Barbecue dishes such as chicken skewers with peanut sauce are only Dhs16. Expect to fork out around Dhs20 for noodle mains, and Dhs30 for seafood dishes.

Eat & Drink
Restaurants
EDITOR’S PICKS
Here's the full list of UAE public holidays in 2023
READ MORE
23 incredible things to look forward to in the UAE in 2023
READ MORE
Hidden gems: 10 UAE desert pop-ups to discover this winter
READ MORE
Where to travel in 2023: 10 new flight routes from the UAE
READ MORE
MOST POPULAR
The UAE law changes on marriage, divorce and child custody to know about from February 1
5 fabulous new Dubai hotels to check-in to
Pics of the week: Your best photos of the UAE
Dhow & Anchor has got you covered every day of the week
RTA: All the road closures you need to be aware about
YOU SHOULD CHECK OUT
Our website uses cookies and other similar technologies to improve our site and your online experience. By continuing to use our website you consent to cookies being used. Read our privacy policy here.