Where to go cycling in Abu Dhabi

What’s On goes cycling in Abu Dhabi. Find out about the best places to ride a bike in Abu Dhabi, including Yas Marina, Al Wathba, Corniche.

Yas Marina Circuit
There’s not many places in the world where you can cycle around a Formula One track. But in Abu Dhabi you can do it every week. TrainYas takes place on a Tuesday and Wednesday evening at Yas Marina Circuit (ladies-only on a Wednesday) and you’ll see a mixture of pedal enthusiasts, from wannabe pros to more casual riders and even kids wobbling around on stabilisers. A lap of the circuit is 5.5km and you can rent a bike and helmet from Fun Ride Sports for Dhs30 to Dhs50 or borrow one for free from the Cleveland Clinic.

Corniche
You can cycle along 8km of the capital’s Corniche in designated cycle lanes, although this one is more about the scenery – it’s a busy location with lots of pedestrians and traffic, meaning you won’t see many hardcore riders. You can borrow one from rental firm Byky at several locations along the Corniche and also Fun Ride Sports, by the Hilton Abu Dhabi.

Al Wathba
The capital’s newest cycle track is a 40-minute car journey from the city centre in Al Wathba. Situated near the camel racing track, this course offers 8km, 16km, 20km, 22km and 30km loops and features solar panels and lights, meaning you can ride at night. An Adnoc shop has also opened so you can stop for a snack and a coffee. There’s also a room with lockers and showers next door and Be Sports has a small shop here. There are plans to extend the track to 100km and events are already being held there, such as the Emirati Cycle Challenge, which took place late 2014.

AUD green routes
If you’ve driven around Khalifa City, Mohammed Bin Zayed City, Al Zeina and Yas Island, you’ll notice there are some green pavements along some roads. These are designated cycle paths that are ideal for families intent on getting some exercise at a weekend.

Share a bike
The city’s first bike sharing scheme launched at the end of 2014 on Yas Island. You can rent a bike from ADCB Bike Shake for Dhs15 an hour – and you can hire a set of wheels from one of ten stations Raha Beach and Yas Island. Each station has a touchscreen kiosk and you don’t have to return the bike to the same kiosk you hired it from. 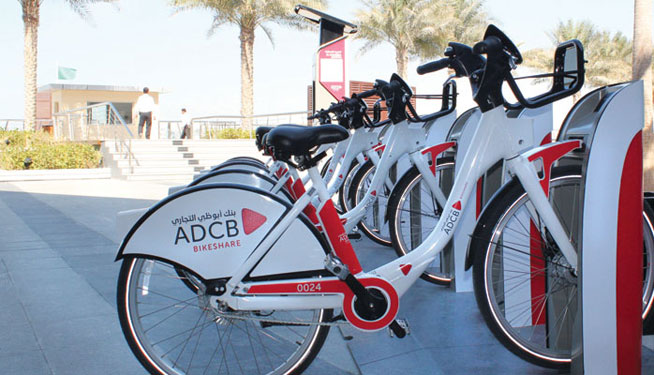 Still to come….
You’ll have to wait a few years to get the chance to ride them, but Abu Dhabi intends to double the number of cycle paths in the city by 2020. The government announced plans in April of 2014 that will see areas such as Al Zahiyah and Khalidiyah get wider footpaths and designed lanes for bikes. The Walking and Cycling Masterplan will also add paths to Khalifa City, Shahama and Baniyas. 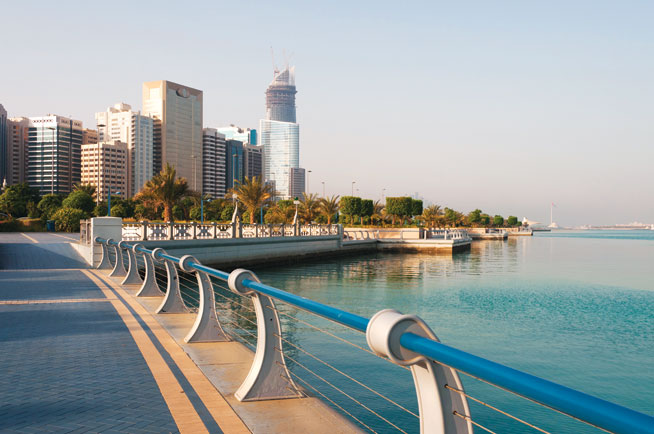 OTHER WAYS TO CYCLE

The Cycling Room
If you don’t want to cycle outside in the oppressive heat, particularly during summer, then head to The Cycling Room. It runs around 12 to 14 classes a week in a studio that has room for 26 spinners and cyclists ride in front of a giant screen which shows different types of scenery, such as mountain ranges.

Aqua bike
SpaBike is a revolutionary aqua therapy treatment now available for the first time in the capital at Bodylines Spa at the Yas Island Rotana. In simple terms, it’s a bike in a bath and experts claim you can burn up to 700 calories per session (the hydraulic friction created means you burn more calories quicker than you would doing traditional cycling). 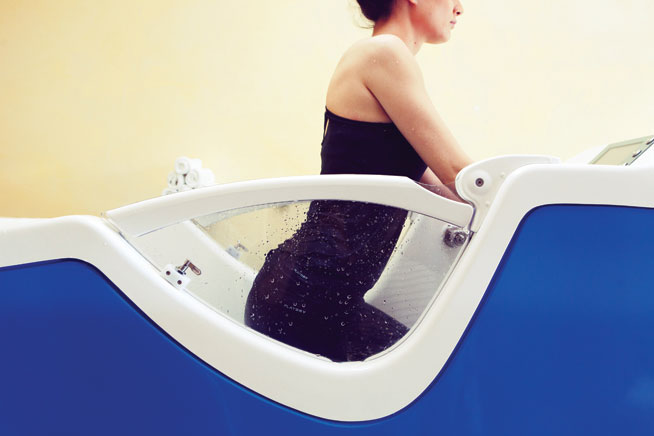 Fat bikes
A mountain bike with tyres at least three inches wide – and they’re good at riding over sand as a result. There’s two places you can try them in Abu Dhabi: one is on a Tuesday night at TrainYas at Yas Marina Circuit (head for the Adventure HQ stand), the other is at the considerably more sandy Qasr Al Sarab Desert Resort in the Western Region. Here, you can pedal your way around the emirate’s dunes.

WHY YOU SHOULD START PEDALLING

Brett Bowie from Saracens (right) on the benefits of bikes

– Cycling provides one of the best ways to stay fit, fast and lean. The benefits include increased aerobic and anaerobic fitness and reduced fat levels off areas such as thighs, bottoms, hips, and tummies.

– It’s zero impact. So there’s no repetitive impact injuries normally associated with running or high impact aerobics. There’s no bouncing or jumping up and down for bodies with larger tummies, bottoms or breasts and no impact upon older or injured knees, backs and ankles.

– Cycling includes active recovery. It incorporates high intensity work followed by aerobic recovery tracks. Thus zero to minimal stiffness or soreness in muscles the next day. Even for beginners!

-It’s social and it’s visual. You can talk to people beside you and have a laugh. Cycling indoors? Try the vast array of large screen video imagery we display during many Saracens Cycle indoor classes. Anyone want to ride the French Alps or in Spain?

– If you’re working hard, sweating and breathing hard then losing 500 to 800 calories a session is doable. At Saracens, we focus on HIIT – High Intensity Interval Training – so even more calories are burnt in the post-exercise phase for up to 24 hours due to more elevated metabolic rates. It’s for the same reason we’ve launched metafit classes. HIIT is the way forward! 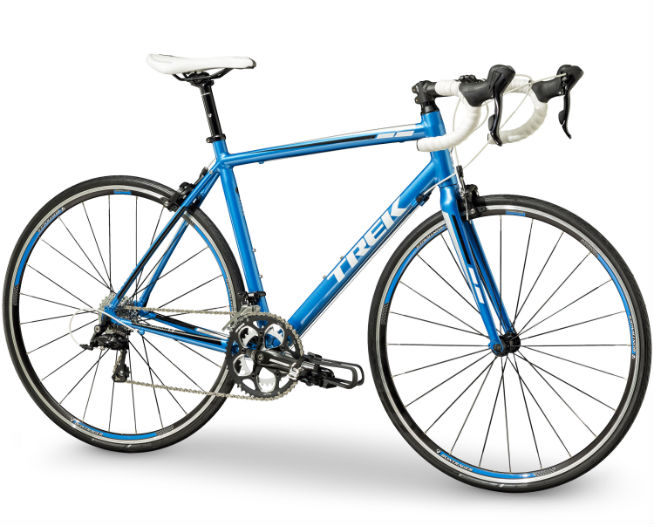 Sport & Fitness
EDITOR’S PICKS
Here's the full list of UAE public holidays in 2023
READ MORE
23 incredible things to look forward to in the UAE in 2023
READ MORE
Hidden gems: 10 UAE desert pop-ups to discover this winter
READ MORE
Where to travel in 2023: 10 new flight routes from the UAE
READ MORE
MOST POPULAR
Through my eyes: The UAE according to Natalia Shustova
Review: La Niña
1484 by Puro launches the UAE’s highest afternoon tea
Check out 10 of the most expensive homes for sale in Dubai right now
The best ways to say "I love you" at JW Marriott Marquis Hotel Dubai
YOU SHOULD CHECK OUT
Our website uses cookies and other similar technologies to improve our site and your online experience. By continuing to use our website you consent to cookies being used. Read our privacy policy here.