Into the wild: where to get up close with nature in the UAE

Abu Dhabi isn’t just about fast cars, skyscrapers and brunches. Dive deeper into the capital and you’ll find turtles, dolphins, flamingos, antelope and even tigers, all living alongside us…

Giraffes
Despite originating from Africa, these long-necked mammals can be seen in captivity in most zoos and centres around the country. At Al Ain Zoo, for example, visitors have a unique opportunity to interact with the giraffes at the feeding platform. Make your way up a ramp to a designated area for an up-close view of the animals – and offer a crunchy carrot or lettuce leaf snack to your new long-tongued pal. Emirates Park Zoo in Abu Dhabi is also home to several giraffes that share a park with zebras and Japanese sikka deer.

Also try: To really get a sense of these quiet giants in the wild, try the safari on Sir Bani Yas Island, where giraffes roam free with other animals. 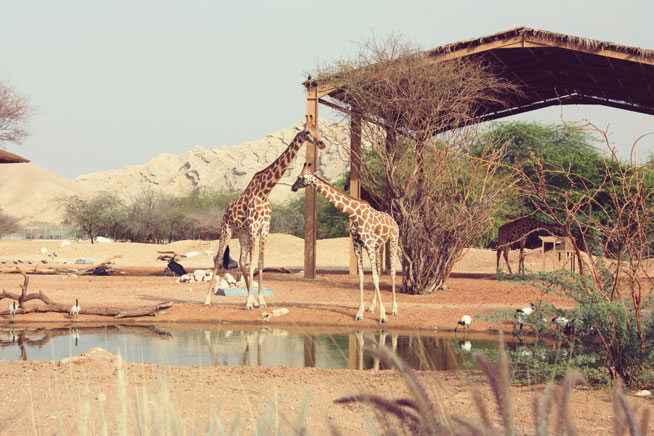 Cheetahs
On the pristine island of Sir Bani Yas, the Arabian Wildlife Park is home to more than 10,000 free-roaming animals. You’ll drive around in a Land Cruiser scoping out the compound for the park’s most popular animals such as giraffes, zebras, ostriches and hyenas. But it’s the four cheetahs that are the park’s most prized possessions. They were born in captivity, but through training from the wildlife and conservation staff on Sir Bani Yas Island were taught to hunt and fend for themselves and subsequently released to roam free in the park.

Also try: You can see these proud moggies, along with Siberian tigers, at Emirates Park Zoo.

Salukis
Salukis are one of the oldest known breeds of domesticated dogs and are a part of Bedouin culture – graceful, strong and famous for their hunting prowess. They’re so skilled at hunting they are able to bring down a small gazelle. The Arabian Saluki Centre was established to honour these incredible dogs and ensure pure lineage through breeding.

Bottle-nosed dolphins
This is the largest of the eight species of dolphin that have been recorded in UAE waters and they’re often spotted on east coast boat trips. You can jump aboard Captain Tony’s Eco Boat Tour from Yas Marina, which explores the sand banks and mangrove forests of Abu Dhabi, before continuing on to Dolphin Bay – so called because of the dolphins often seen playing in the shallows.

Also try: For an extra-special treat, the dolphin bay at Atlantis, The Palm in Dubai allows you to swim with Flipper and the gang in a large enclosure. 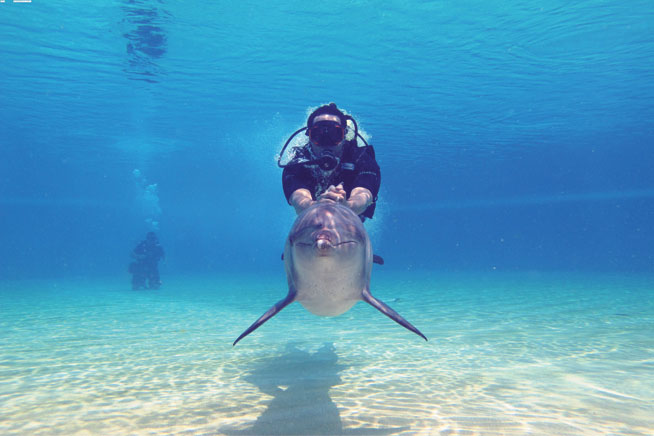 Falcons
One of the country’s oldest traditions is falconry and it’s hard not to walk through a mall or go on a desert safari without coming up close to one. They are often used as a gimmick to encourage tourists to part with their money for a staged photo. For a more authentic experience with these elegant birds of prey, check out Abu Dhabi’s falcon hospital, the world’s largest and most advanced hospital dedicated to all things falcon. You can visit the museum and discover the bird’s history, take a guided tour and experience the thrill of the free-flying falcon display. 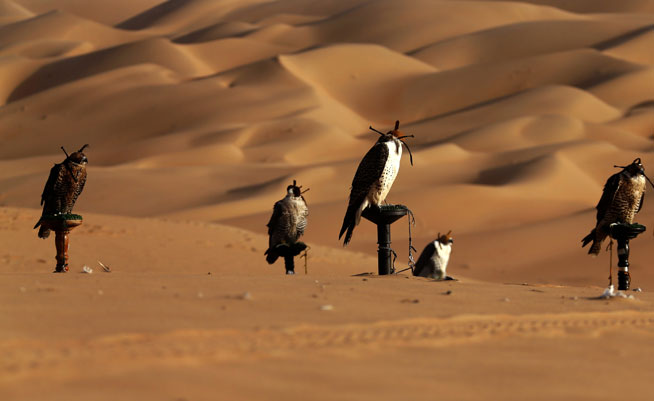 Sharks
There are at least ten species of shark in UAE waters, including reef sharks, blacktip sharks, hammerheads and tiger sharks. Very few potentially dangerous sharks come in close enough to be a problem to swimmers but sightings are possible in shallow waters, particularly around Snoopy Island in Fujairah.

Also try: Those who prefer to observe these predators from further away can visit the Dubai Aquarium And Underwater Zoo, where there are at least 400 sharks and ray inhabitants on display.

Flamingos
This common migrant is sometimes found in large numbers in lagoons and shallow mudflats on the Gulf coast. You’ll also see a few scattered throughout the shallow inshore lagoons along the Abu Dhabi coast. It’s also a popular species for the Dubai Wildlife Sanctuary at Ras Al Khor where several thousand winter each year, although nesting attempts have so far been unsuccessful. 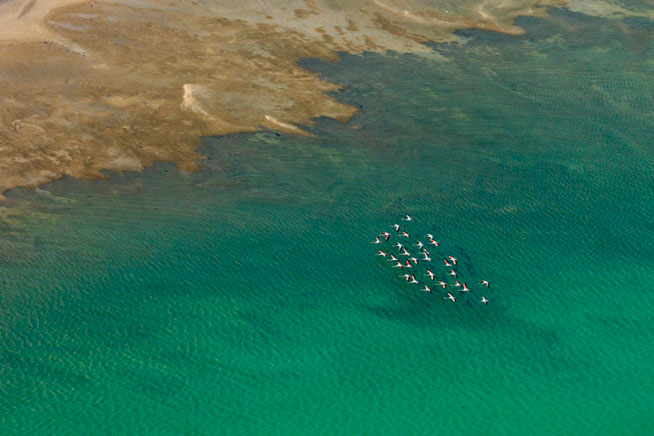 White tigers
There are many reasons to visit Emirates Park Zoo. It’s home to lions, leopards and zebras, but the stars of the show are the white tigers. Only 300 remain in the world – and three are right on your doorstep.

Also try: You can meet two other white tigers at Al Ain Zoo. In 2011, Sugar and Spice were gifted to the zoo by Sheikha Latifa bint Rashid bin Khalifa, who raised the cubs at the Royal Palace in Dubai from three months old.

Arabian oryx
These beautiful antelope with long, straight horns have earned the oryx the nickname ‘spear antelope’. Sadly, indigenous animals such as the Arabian oryx were hunted to the edge of extinction, but in the ’70s, when their numbers in the UAE declined to no more than seven in the wild, the directives of the late Sheikh Zayed Bin Sultan Al Nahyan encouraged the country to develop conservation programmes to help save the species. Today, Al Ain Zoo is home to a number of Arabian oryx.

Also try: On Sir Bani Yas Island, Arabian oryx roam free around the parameters of the wildlife park. Just be sure to drive slowly. 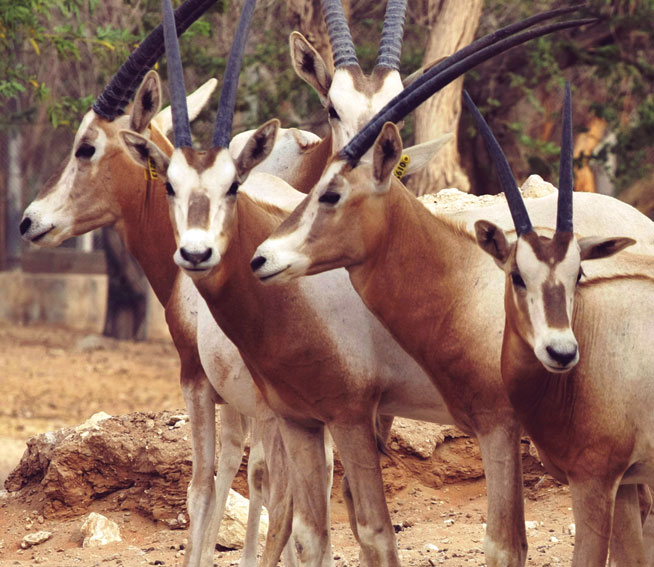 Lemurs
Native only to Madagascar, ring-tailed lemurs are classified as ‘Endangered’ on the International Union For Conservation Of Nature Red List Of Threatened Species due to their dwindling numbers in the wild, but a family of primates were welcomed at Al Ain Zoo in July.

Turtles
Some 30 years ago, green turtles used to haul themselves up onto the UAE’s beaches to lay their eggs. Now their nesting grounds are covered by harbours, hotels and high rises. Only the green turtle and the hawksbill turtle breed here now. To catch a glimpse of these rare reptiles, visit the Park Hyatt Abu Dhabi on Saadiyat where hawksbill turtles lay their eggs each year. The nesting season extends from April to the end of August.

Also try: The enclosure at the Mina A’Salam, Madinat Jumeirah in Dubai houses rescued turtles that have washed ashore due to illness. The Dubai Turtle Rehabilitation Project monitors the final stages of rehabilitation before releasing them. Visitors can see them for free. 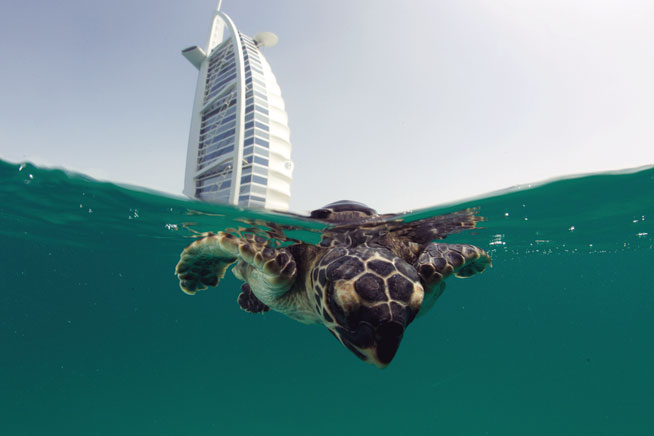 Sea cows
OK, it’s highly unlikely that you’ll ever see a dugong in Abu Dhabi, but it deserves a mention because of its history. Related to elephants, it has nails instead of claws and lives in herds led by a female. There are probably less than a thousand of these gentle creatures left in the Gulf, but the islands of Marawah and Bu Tina to the west of Abu Dhabi are favourite feeding grounds on their migration routes.

Arabian leopards
It’s unlikely you’ll get to see this rare predator in the wild – the last leopard residents are said to have disappeared across the border into Oman. However, many hikers still claim they’ve come across droppings or even its prints on mountain treks in the eastern region of the UAE. Alternatively, you can see them here in Abu Dhabi at Al Ain Zoo.

Also try: The Sharjah Desert Park at the Arabian Wildlife Centre has undergone a successful breeding programme and is a good place to see this iconic animal in the UAE. 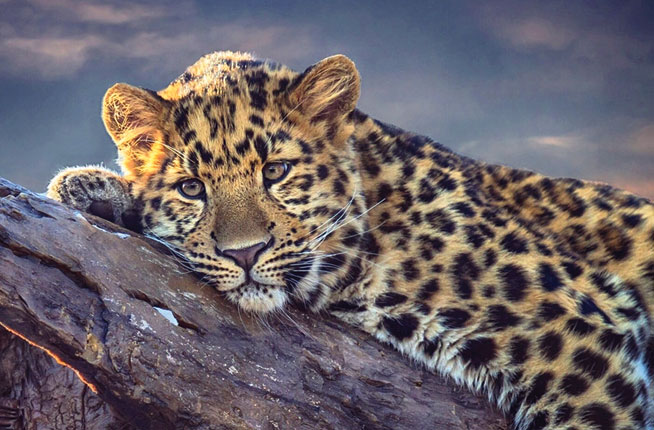 Socotra cormorant
This is Arabia’s only nesting cormorant. Endemic to Arabia and once present in large numbers offshore in the Arabian Gulf, they are now under serious pressure from man as their nest sites become disturbed by human intrusion. However, you’ll still likely see a flock just flying offshore between Umm Al Qurain between July and November. Otherwise, small numbers can be seen anywhere off the UAE’s coast.

Camels
Although there are two types of camel, only the dromedary (one-humped) is found in the UAE. A trip to a camel racetrack can be one of the highlights of any visit to the UAE. The best places to go to are the tracks at Dhaid and Digdagga off the road to Al Ain. Races take place during the winter months, usually on Wednesdays, Thursdays and Fridays, with additional races on National Day and public holidays. 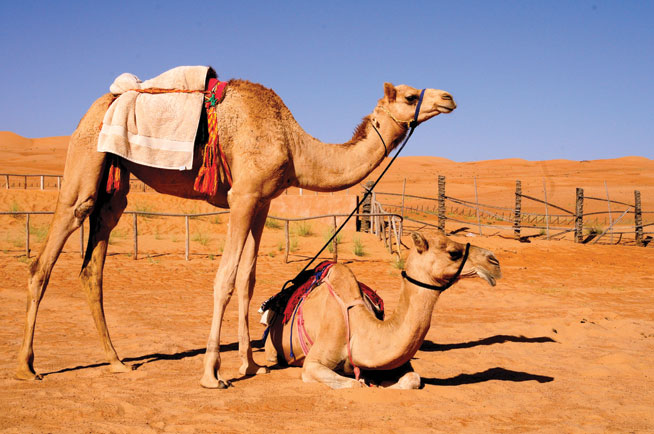 Culture
News
Things to do
EDITOR’S PICKS
Ain Dubai will open with fireworks, live music and a drone show
READ MORE
Incredible Aura SkyPool to open in Palm Tower this November
READ MORE
Brit Grand Slam hero Emma Raducanu confirmed for Mubadala Tennis
READ MORE
What’s On Nightlife Awards 2021: Here are the nominees...
READ MORE
MOST POPULAR
This brilliant Dubai beer garden reopens for the winter season
There's unlimited good vibes at this neighbourhood hangout spot
Meet the cooking showman who makes OPA Dubai all the more joyful
Review: Niri Restaurant and Bar, Mamsha Al Saadiyat
Harlem Globetrotters are coming to Expo 2020 Dubai this October
YOU SHOULD CHECK OUT
Our website uses cookies and other similar technologies to improve our site and your online experience. By continuing to use our website you consent to cookies being used. Read our privacy policy here.