What’s On discovers more about the Abu Dhabi Police’s latest car – a Rolls Royce Phantom – which was unveiled as part of GCC Traffic Week.

The Abu Dhabi Police have added a Rolls Royce Phantom to their fleet.

The luxury car, which will only be used for special events and not daily patrols, sports an aptly numbered 999 number plate. Painted a dark red and white, the car was displayed at Yas Mall earlier this week, on Sunday March 8.

Of course, this is not the first time police in the UAE have added supercars to their squads. The Dubai Police famously count a Bugatti 16.4 Veyron, McLaren MP4-12C, Ferrari FF, Nissan GT-R, Audi R8 and Bentley Continental GT among their fleet of vehicles (below).

The unveiling of the new car was hosted as part of GCC Traffic Week, which is holding a variety of events and awareness campaigns throughout both the UAE and GCC region. Held under the slogan ‘Your Choice Determines Your Destiny,’ the weeklong initiative aims to encourage safe driving and curb traffic accidents. 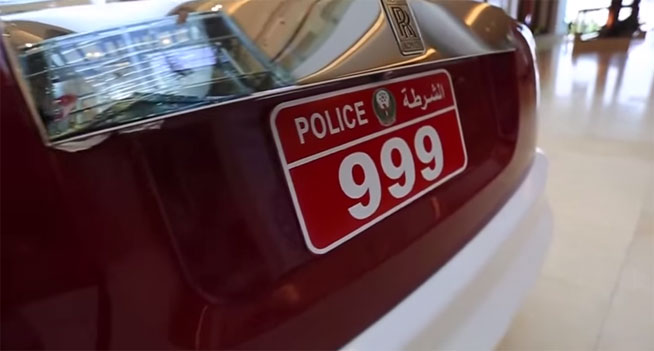 “All society segments must work together to limit the alarming number of accidents that have become a great concern for the UAE society, and is the number one cause of deaths in the country,” said Brigadier Ghaith Hassan Al Zaabi, Director General, Traffic Coordination Directorate General, Ministry of Interior.