MMA fighter Jesse Ronson: "I'm not afraid to do anything in the ring"

What’s On chats to MMA fighter Jesse “The Body Snatcher” Ronson ahead of the second Abu Dhabi Warriors Fighting Championship on March 26.

Ahead of his appearance at the Abu Dhabi Warriors fighting championship on March 26, the Canadian fighter Jesse Ronson – aka The Body Snatcher – tells What’s On more about his upcoming fight with Russian mixed martial artist Gadji Zaipulaev, his nerdy hobby and just which celebrity he’d like to pummel.

You started off wrestling and kickboxing, how did you end up in mixed martial arts (MMA)? In 2009 I had my first pro kickboxing fight and I made very little money doing it. I was asked by a friend if I was interested in fighting MMA, it paid twice as much as my kickboxing fight, so I agreed. I had never trained MMA before but I went out there and knocked a guy out in the first round in three minutes with a body shot.

Is this your first time here in Abu Dhabi? Yes it is. I am really impressed with the city and all the people here. This is the nicest hotel I’ve ever stayed in.

What have you seen so far? Yesterday we went to Sheikh Zayed Grand mosque and that was phenomenal. If I didn’t have to start cutting weight today I would go to Emirates Palace.

Tell us more about your nickname, the Body Snatcher. It was in 2006 during the provincial championships (in Canada). I had three fights in three days and I won them all by knockout in the first round by body shots and champion boxer Fitz Vanderpool, said “watch out this guy’s a killer, he’s a body snatcher” and it stuck.

What do you think about your opponent, Gadji Zaipulaev? I’ve seen seven or eight of his fights, he looks like a grappler. Unless he can dominate his opponents, he will stay striking, but if he can’t – which he won’t be able to dominate me – I’m sure he’ll try for the take down. This is the fight where I’m going to be looking to work my ground skills.

What can people expect at the match? I don’t put on boring fights. It’s very hard to stay seated when I fight; it’s action-packed and exciting. I’m always pressing for action. I’m not afraid to get hit and I’m not afraid to do anything in the ring. If my opponent is equally as fearless then you’ll probably have the best fight of the night.

So how do you feel about the upcoming match? Physically and mentally this is the most prepared I’ve every felt for any fight. I’m confident.

Did you always want to be a MMA fighter? When I was 13 years old, I always told my friends I was going to be in the UFC. Even though I never trained or did mixed martial arts, I always said it. And five years after I turned pro I got signed to UFC. That’s when it all started to come together. 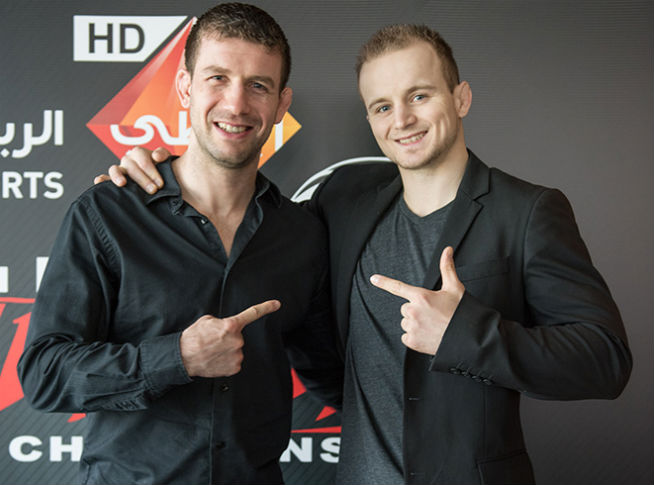 What has been your worst injury so far? I’ve been very lucky with injuries. I’ve broken my nose three times, had ribs pop out in my back, a few broken fingers. All I do is see a chiropractor and he puts ‘em back in and I’m training the next day. Nothing serious so far, knock on wood.

Do you any special rituals before you fight? No, I believe if you have to change who you are to fight then you are not going to fight the way you train. In the training room I’m joking, having a good time – I’m myself. So if you were to come into the changing room before I fight, I fight. It only gets serious when I’m in the cage and the bell goes ‘ding, ding’.

If you could fight any celebrity, who would it be and why? It would probably be like Kanye West. I just don’t like his demeanor and how he acts, I mean I don’t harbor any ill will towards any celebrities, but he stands out as the biggest jerk right now.

Tell us something surprising about yourself. I’m actually quite a big nerd. I’m not sure if you are familiar with Dungeons and Dragons but I like to play. It’s a fantasy role-playing game with dice and paper and you use your imagination. That shocks everyone I tell.

News
Sport & Fitness
Things to do
EDITOR’S PICKS
Ramadan in Dubai: 38 iftars to try
READ MORE
Where can Dubai residents travel? Check out these 14 destinations
READ MORE
Rumours, facts and reveals: New Abu Dhabi bars and restaurants
READ MORE
UAE announces reduced working hours for Ramadan 2021
READ MORE
MOST POPULAR
The St. Regis Dubai, The Palm to open on Palm Jumeirah in May
Do some good: 7 initiatives to support this Ramadan in Dubai
Eyes to the skies: A huge meteor shower is expected this month
Dine under Bedouin-inspired tents or at home with Amaseena this Ramadan
5 ways to stay fit the fun way at Hudayriyat Island this Ramadan
YOU SHOULD CHECK OUT
Our website uses cookies and other similar technologies to improve our site and your online experience. By continuing to use our website you consent to cookies being used. Read our privacy policy here.