What’s On has Burj Khalifa bird’s eye view videos and pictures of a Dubai world record for highest bird flight from a man-made structure.

The Burj Khalifa acted as the starting perch for an imperial eagle as part of the world record attempt for the highest recorded bird flight from a man-made structure.

Video from the ivory-tailed eagle was live-steamed via a small fish-eye camera as it soared from the top of the world’s tallest building 830 metres towards its trainer. 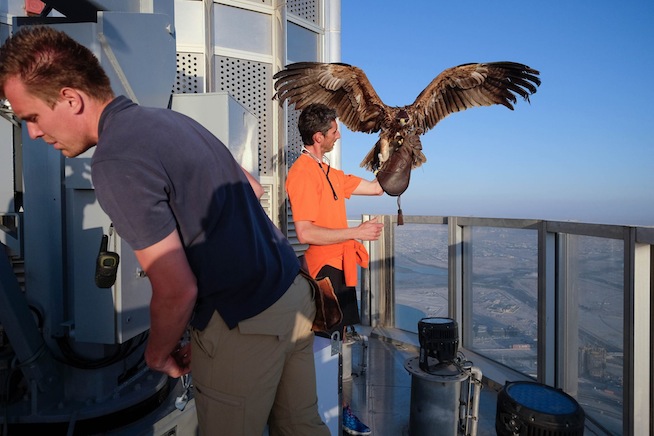 ‘Darshan’ was equipped with a small Sony camera which weighed in at 300g (approximately 10% of Darshan’s bodyweight) and was fixed to the eagle to capture the momentous – and meaningful occasion.

Freedom Conservation, the organisers behind the event, is a conservation movement that aims to protect and reintroduce threatened birds of prey through creative conservation methods. They hope that the event will act as a symbol that humans and nature can live harmoniously together. 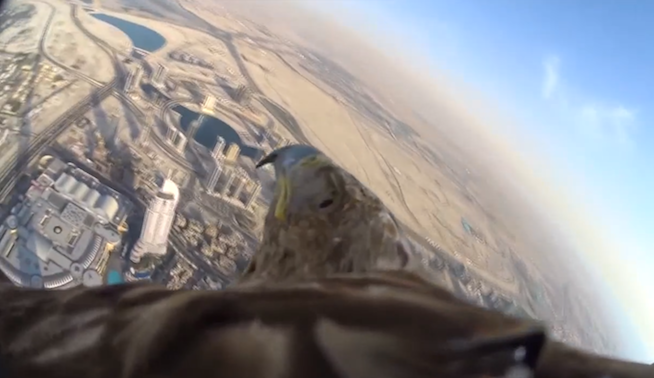 In the live BBC feed, Ronald Menzel Director of Freedom Conservation described how the campaign to protect wildlife in urban areas has been supported every step of the way by the Crown Prince of Dubai: “The way Dubai developed is just amazing but of course this goes with a huge environmental impact. Our message, and the message of the Crown Prince is to try to shift the development of Dubai to become more sustainable. We are so proud to help pass this message on to his people.”

Speaking about falcons themselves, Menzel said: “We don’t need to live apart from wildlife; we can live one next to another. We can continue to do fun things like falcon hunting, but we can do it in a way that is sustainable.” 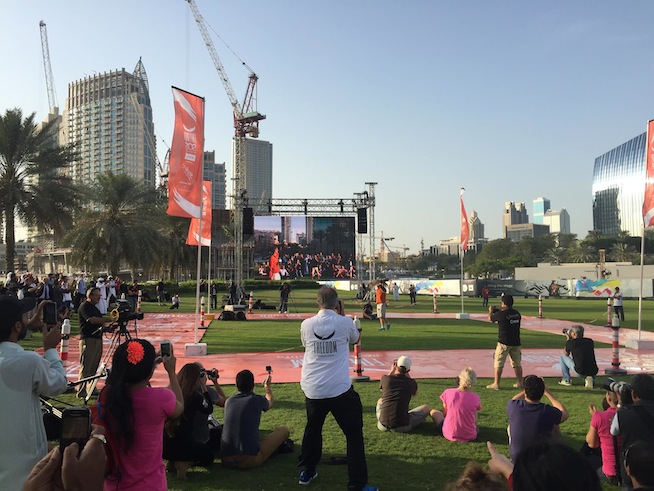 Darshan has been trained by falconer Jacques-Olivier Travers from a breeding facility in Thonon, France. Throughout the 5 minute live-feed, Travers can be seen in the background helping to guide Darshan to the ground.

Speaking to The National newspaper in the days running up to the event, Travers said: “If the conditions are right, I would like to see the bird go into a dive. It will reach a speed of up to 200kmph, so it will be spectacular.”

Check out the full video below:

News
EDITOR’S PICKS
UAE holiday dates announced for National Day
READ MORE
Emirates Dubai 7s is back: Here's why we're excited...
READ MORE
Tennis ace Andy Murray to play at Mubadala World Tennis Championship
READ MORE
UAE 50: Where to watch National Day fireworks in Dubai
READ MORE
MOST POPULAR
20 of the best things to do in Abu Dhabi this long weekend: Part 2
First look: London-loved restaurant The Cinnamon Club opens in Dubai
Check out this amazing display at the world's highest outdoor infinity pool
The coolest Dubai beach clubs to book a spot at this weekend
7 festive reasons to head to Fairmont The Palm this December
YOU SHOULD CHECK OUT
Our website uses cookies and other similar technologies to improve our site and your online experience. By continuing to use our website you consent to cookies being used. Read our privacy policy here.