How T-shirt-wearing troubadour Ed Sheeran took over the world

What’s On previews Ed Sheeran in Dubai. Read interviews and watch Ed Sheeran videos ahead of his concert in Dubai at Media City Amphitheatre.

Welcome to the ‘year of Ed Sheeran’ – or at least that’s what 2015 should be called. Since its release last June, the British singer-songwriter’s blockbuster sophomore album X – pronounced ‘multiply’ – has been No 1 in more than 12 countries, earned Sheeran two Grammy nominations, and has been streamed 430 million times worldwide.

This staggering collection of achievements has contributed to making Sheeran the most searched-for male celebrity on Google. But despite his stratospheric success, the ginger-haired guy with the guitar has managed to stay grounded. 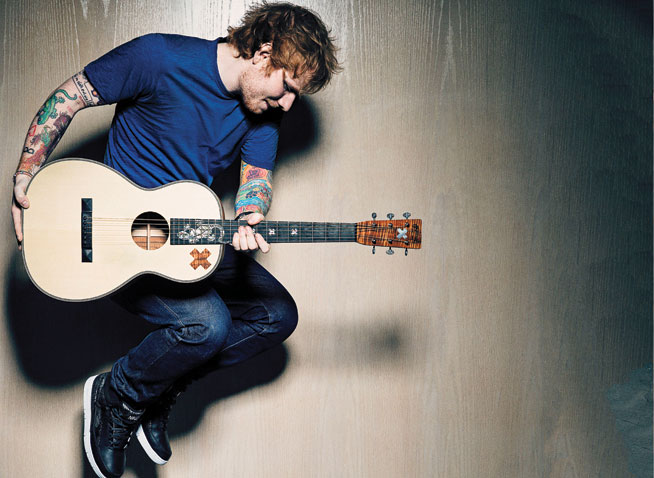 Sheeran’s story is the well-trodden tale of a kid strumming a guitar in the bedroom. Born 24 years ago, Sheeran grew up in the small town of Framlingham in Suffolk, in southern England.

He recalls: “I was a weird little ginger kid, with a stutter, big specs and no ear drum.”

He suffered from a stutter (later cured by speech therapy), had a birthmark removed from his face by laser surgery and had a perforated ear drum, which was replaced when he was 11. He also had a detached retina, which gave the impression that he had a lazy eye.

Music helped him through his early struggles.

“I was a misguided teenager. As soon as I started writing songs and playing shows, that was my focus.”

At 16, he announced he was moving to London to pursue music. Once there, Sheeran played pubs and clubs to make ends meet, staying with mates and even sleeping rough on the London Underground.

“I’d gig at night and if I didn’t have a sofa to crash on, I’d sleep on the Circle Line all day,” he recalls. 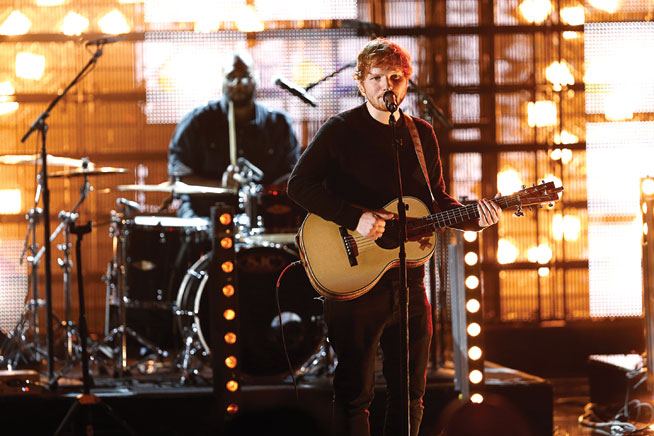 Three years later, Sheeran had saved enough money for a return flight to Los Angeles. Again, the hard-working singer/songwriter gigged around town. But his big break came when he played at The Foxxhole, a musical showcase run by movie star Jamie Foxx. Shortly after, Ed signed with Atlantic Records and is now managed by Elton John’s company Rocket. Of an early encounter with the Rocket Man himself, Sheeran laughs: “Elton walked in and said, ‘Where is Ed Sheeran?’ I was like, ‘Wow! He knows my name!’”

Heartfelt lyrics
Sheeran’s debut single was The A Team, taken from the album +. He wrote the folk song about a troubled woman after visiting a shelter for the homeless in England, and it earned a prestigious Ivor Novello award nomination for Song Of The Year. But then in 2014 Sheeran reached another level with Sing, his ubiquitous upbeat collaboration with R&B superstar Pharrell Williams. With its infectious chorus of ‘whoahs’ and its slick LA party sound, the song exposed Sheeran to a new audience.

One of the reasons fans have latched on to Sheeran is the transparency in his lyrics, with many of his songs inspired by his love life. Contrary to popular belief, Don’t, Ed’s bitter song about romantic betrayal, is “about someone who’s well-known – but not Taylor [Swift]”, he insists. Rumour is that his former flame and fellow Brit pop sensation Ellie Goulding is the subject of Ed’s lyrical lashing. But he does confirm his track Nina is about his year-long relationship with Scottish singer Nina Nesbitt.

For Sheeran, pouring his feelings into a song is therapeutic. “It’s like sending an angry text,” he explains. “But you’re getting something out of it.” In the future we may hear fewer songs from Sheeran about a broken heart as he’s been happily dating Athina Andrelos, a Greek food stylist who works for celebrity chef Jamie Oliver, since April 2014. 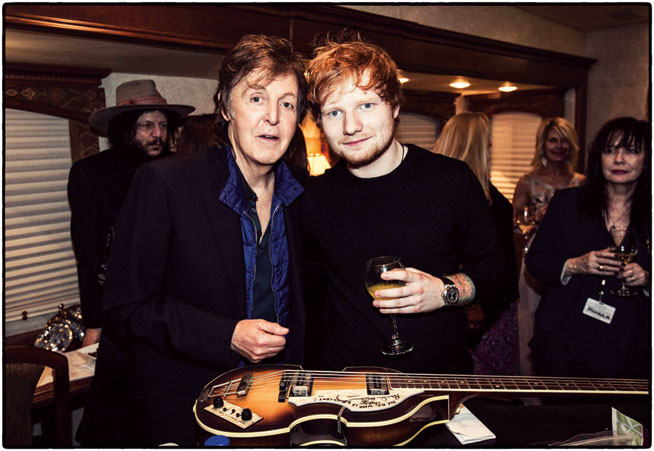 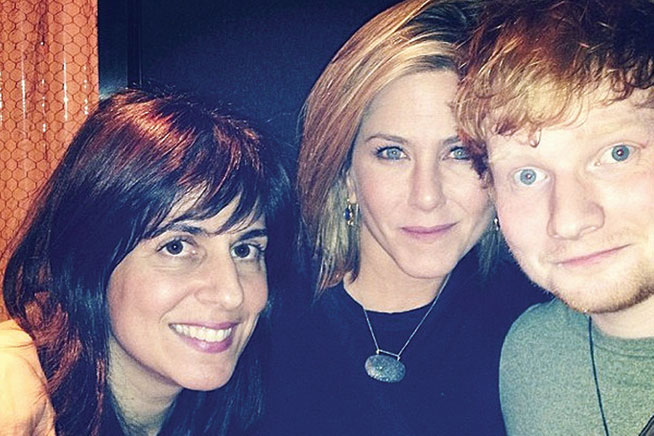 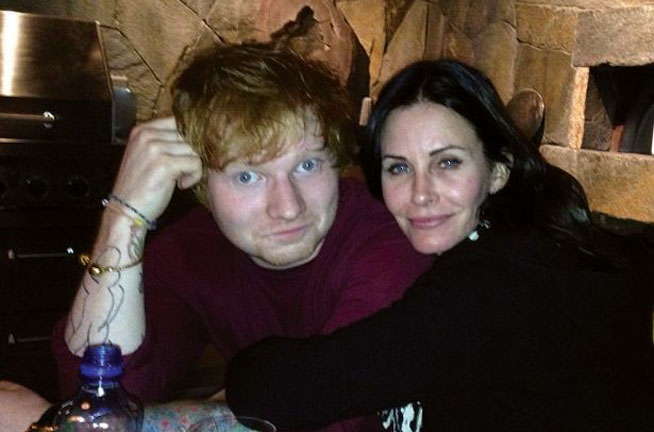 His, shall we say, unconventional image hasn’t deterred the rich and famous lining up to be his pals. His mobile phone contact list includes Taylor Swift, Paul McCartney and Jennifer Aniston. Another Friends star, Courteney Cox, is also a friend. She says of the singer, “Ed’s comfortable in his own skin. That’s why he brings people together.”

The Brit, who plays the UAE for the first time this March, has been open about partying hard in the past, but he seems to be running out of steam, perhaps more time spent in LA where wheatgrass juice shots and jogs along the beach are commonplace, has rubbed off on him. He recently admitted to trashing his hotel room only to carefully clean it back up again, as a nice young man from Suffolk is likely to do.

Just lately, Sheeran ticked off that essential rite of passage for a celebrity these days: having a public feud with a fellow star. Ex-Oasis frontman Noel Gallagher recently told a journalist: “I don’t think I can live in a world where [Ed Sheeran playing Wembley] is even possible.” Sheeran kept his cool and tweeted to his 12 million followers: “I can live in it, it’s really enjoyable.”

Cleverly, Sheeran then defused the situation by texting Gallagher, offering him tickets to one of his sold-out shows. Gallagher replied, ‘You cheeky so and so. My daughter would love some.’

Being true to himself and not getting sucked into the music industry machine is sure to prepare Ed for the potential pitfalls that await him. Criticism, he admits, can be a good thing. “I get a lot of stick from press and people, but it’s good to get stick,” he says.

For a guy who used to sleep on trains, there seems to be no danger of ego eating this pop star.

News
Nightlife
Salaam!
EDITOR’S PICKS
Here's the full list of UAE public holidays in 2023
READ MORE
23 incredible things to look forward to in the UAE in 2023
READ MORE
Hidden gems: 10 UAE desert pop-ups to discover this winter
READ MORE
Where to travel in 2023: 10 new flight routes from the UAE
READ MORE
MOST POPULAR
26 of Dubai's best beachfront restaurants
8 wonderful things to do in Dubai this week: Feb 6 to 9
Where to go to get your Al Baik fix in the UAE
Reset and recharge with a relaxing staycation at this stunning Dubai hotel
The most expensive apartment in Dubai just sold for Dhs410 million
YOU SHOULD CHECK OUT
Our website uses cookies and other similar technologies to improve our site and your online experience. By continuing to use our website you consent to cookies being used. Read our privacy policy here.