Why Hollaphonic is tearing up the rule book

What’s On team up with Hype to interview Hollaphonic duo Olly Wood and Greg Stainer ahead of their long-awaited album release.

It’s gone 6pm on a Sunday evening and Hollaphonic’s Olly Wood and Greg Stainer arrive at Hype HQ looking just a smidgen tired. The effort required to release and promote new music is well documented and a mere haze of fatigue just seems to be setting in as we prepare for this issue’s cover shoot, just days ahead of the release of their debut album, Personal Space. But the guys are still genuinely buzzing to talk about their lives, music and their album – particularly off the back of recent news that their remix of Philip George’s Wish You Were Mine, a track their management believes will really begin to open doors for the duo, has made it onto the hallowed airwaves of BBC Radio 1.

Introduced in May 2012 by another force on the UAE scene, the Smokingroove brothers, the two Dubai-based British expats struck up a friendship based on their mutual love and appreciation of UK garage and house music – the sounds that poured out of the UK in the nineties and noughties but that has only now, in the last few years, managed to glean the type of global acceptance and exposure it always deserved. They quickly realised that they could work together to make the kinds of music they really wanted to. 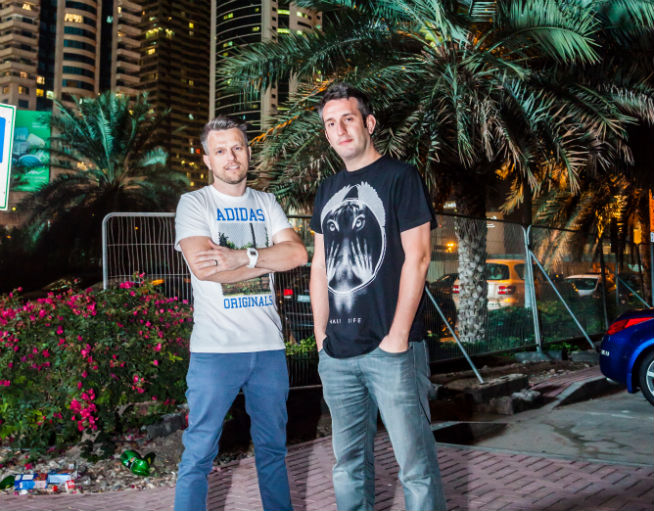 “We were both looking for the attributes that each other had,” reflects Olly. “At the time I was song writing, putting together melodies and lyrics and Greg was producing music in a whole
range of styles but both of us wanted to move into music with
more mass appeal.”

Shortly thereafter they began to experiment with a potential musical collaboration, getting into the studio and building a sound that spoke to their love of electronic genres. The partnership that would eventually be called Hollaphonic has since gone on to
become one of the region’s biggest and fastest growing electronic music acts.

Both Olly and Greg built up their credentials and skills through years of working in and around the UK music scene. Olly came up MCing at UK garage nights in and around the English south coast, sneaking into nightclubs from the age of 15 and grabbing the mic under the stage name MC Akapella (yes, with a K). “A to the K to the A to the P,” spits Olly, flashing back to his “yoof”. At 16, he got a club residency in Southampton, subsequently moving to London to work for EMI while gigging around the city. Olly’s MCing skills are well known locally. When not on Hollaphonic mic duty, his vocal gymnastics can often be heard accompanying the ragged, throbbing beats of the local drum ‘n’ bass scene. If you partied until the music stopped at Hype’s Clubhouse at the Party In The Park festival late last year, it was Olly’s lyrical flow and cheeky chappy banter that drove the party home. 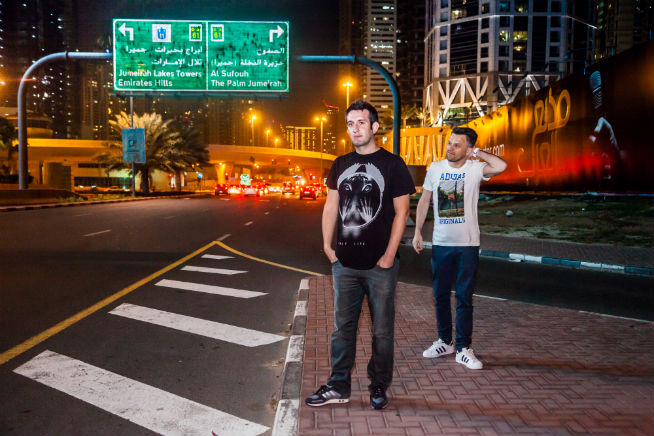 Greg, meanwhile, cut his teeth on his older brother’s less than glamorous mobile disco DJ equipment. “I’d spend a lot of my time trying for find songs that were roughly the same speed so I could figure out how to mix using my brother’s horrific turntables,” he laughs. “Working with such basic gear made it so much easier when I moved over to more technical decks and I started to realise I could actually DJ.”

Bagging his first nightclub gigs at around 16, Greg soon became involved in the UK garage scene, and subsequently pirate radio, which introduced him to lots of people that were making music, not just playing it. “I got into a studio for the first time not long after that, and the first sound engineer I worked with was MJ Cole, who went onto become quite famous,” he grins. “Working with him made it hard to work with less competent engineers. I realised how much I needed to learn if I wanted to be as good as he was. And to this day I’m still learning new stuff.”

Outside of Hollaphonic, Greg’s a familiar voice on the local radio circuit and since 2005 he’s been presenting Club Anthems on the UAE’s national Radio 1, becoming the warm-up act for many an epic weekend.

Teaming up proved to be a relatively stress-free experience for the pair and they quickly founded a solid creative relationship. “One of the biggest reasons why we work as a team is that we can both take criticism – probably from each other more so than from any other human. We’ve both been in studios with a variety of people and it’s really easy to feel uncomfortable or less creative, but together we never had that issue. We debate everything we do but in recent months we’ve really clicked in terms of agreeing on everything,” says Olly.

Essentially, it’s production by absolute consensus with both bringing their own areas of expertise in lyric writing, melody and production to the process. The results are a combination of anthemic EDM, dance pop and barnstorming beats – a sound they believe is truly representative of the place and times they are living in.

Their local success has seen them become one of the most regularly booked acts in Dubai and Abu Dhabi. Hollaphonic has supported Justin Timberlake at du Arena and played to extraordinary crowds at the Abu Dhabi Grand Prix and Sandance, opening for Armin van Buuren and David Guetta respectively, as well as leading the local charge at Creamfields. These opportunities have not only allowed them to “play the big rooms” but also put them in touch with a glut of vocal and musical talent. Timberlake’s backing singer Aaron Camper is a case in point. Olly and Greg met Aaron, who appears on their track Runaway, backstage at the Timberlake gig and the boys were quick to tap him up for a guest vocal. There’s a smooth, almost Ne-yo-esque quality to his voice that works seamlessly with Runaway’s anthemic progression. “Aaron was really excited to work with us,” says Greg. “In the States, the EDM scene is so new and vibrant that artists are hungry to be involved in it. He was a real pleasure to work with and we’re thrilled with the outcome. He’s a really genuine guy and an artist in the real sense of the word.”

Vince Kidd of TV show The Voice [UK] fame is another name to feature on Personal Space and can be heard on Dangerous, the Hollaphonic track that just hit No.1 in Qatar at the time of writing. “I knew of Vince before he was on The Voice,” says Olly. “He’s a really unique person with an incredible tone to his voice and we really wanted to see what we could do together. We got in touch through social media and luckily we hit it off. I met him when I went to the UK and he was super excited to work with us so we rapidly put the wheels in motion to lay down the vocal.”

The album title Personal Space, is a reflection of the humour and banter that fuels Hollaphonic’s music and friendship. “Personal space has two meanings for us,” says Olly, “the first being that we gave this album absolutely everything we had and it’s truly a reflection of our personalities and taste. The second is because, when we started all of this, we were working in very close quarters, often in really small studios, and Greg really doesn’t like people invading his personal space.” He demonstrates by shuffling just a hair too close to his colleague, causing the inevitable flinch that they both knew was coming. “See! Look! He can’t stand it,” laughs Olly.

In honesty, there’s also a sense of relief in the pair that the album is finally to get its airing. After having been pushed back multiple times due to the merger of EMI and Universal, a year-and-a-half after the originally slated release date, its deliverance to the public is, at last, imminent. “We were left in limbo for quite a while, but the album we’ve put out now is the sum of all of us musically and we’re really happy with it,” says Greg. It’s this positive attitude – to make lemonade from lemons – that is a reflection not only of their music but of the guys themselves. They are optimists with big ambition.

So far, it’s all a light-hearted conversation with chatty and affable interviewees, but when talk turns to the qualities of the album that they hope will drive its success on a larger scale the atmosphere in the room changes just a touch. Where Olly and Greg were joshing and teasing each other in front of the Hype photographer just moments before, it turns more considered as a determined – almost steely – focus permeates the tone. They are talking shop now, and they clearly take it
very seriously.

Having played their music to some industry experts, there’s been the suggestion that, given the variety of styles in their music, their album could be considered a little disjointed or even schizophrenic. Olly and Greg’s reply is simple and matter of fact. “To us, this album can’t be pigeonholed into a specific genre,” explains Olly. “Although the foundation is fundamentally house and dance music, it’s much more than that. What’s better than buying an album that answers all your musical tastes? Yes, you can have an album like Disclosure that has a single theme running through the whole album – it’s a sound and a treatment that made sense to them, but I’d rather have an album that is all Hollaphonic but that isn’t afraid to pull on diverse influences. To have all the songs in the same stylistic vein doesn’t reflect who we are or where we come from – it’s not what our city is about. Dubai is a diverse place and the music should reflect that.”

The next few years seem pretty well sketched out for Hollaphonic. With the album already hitting the No.1 spot on the iTunes pre-order dance chart, work on expanding their fan base at home and away is key. There’s a sense they are pragmatic about what that means and what it will require to get there. But for this pair of local lads, success is not measured in dollars and cents, but in how far they can push themselves to be great – how many people they can get listening to and appreciating their uniquely Dubai approach. The ambition for them is to take top billing at a festival. In the meantime, the gigging and promoting continues in earnest. Due to close for Ed Sheeran at Dubai Media City’s Amphitheatre as this issue of Hype went to press, the relentless hard work seems to be paying off. “We won’t have had our best gig until we’ve got the crowd singing along to all of our songs, which is why the release of this album is so exciting,” says Greg, with Olly nodding right alongside him.

Nightlife
EDITOR’S PICKS
Ramadan in Dubai: 50 iftars to try
READ MORE
Where can Dubai residents travel? Check out these 14 destinations
READ MORE
Rumours, facts and reveals: New Abu Dhabi bars and restaurants
READ MORE
UAE announces reduced working hours for Ramadan 2021
READ MORE
MOST POPULAR
Looking for a long stay in a popular Dubai location? Check out Hilton Dubai The Walk...
Review: Is The Orangery your favourite new date night spot?
Deals and discounts: It's all about the ladies on Tuesdays at La Mer
Here's how you could win Dhs50 million this Eid weekend
What's On's epic Lock In staycation is returning to Dubai this month
YOU SHOULD CHECK OUT
Our website uses cookies and other similar technologies to improve our site and your online experience. By continuing to use our website you consent to cookies being used. Read our privacy policy here.