Othello: The Remix - Shakespeare gets ghetto makeover for ADF

What’s On previews Othello: The Remix, part of the Abu Dhabi Festival 2015. This modern take on the Shakespeare classic is a hip hop tragedy.

Drama, deceit and dropped beats. Othello: The Remix will see four actors swap poetry for rap in this modern, hip hop version of Shakespeare’s famous tragedy. The play was created by Chicago-based artists the Q Brothers – Jeffrey Qaiyum aka ‘JQ’ and Gregory ‘GQ’ Qaiyum – who have put a fresh, inventive spin on the saga.

The story sees MC Othello work his way out of the ghetto and into the music industry, gaining the admiration of pop star Desdemona while he does it. However, jealousy takes its toll when his rap battle with hip hop purist Iago becomes more than a bit of wordplay.

The show features four men in jumpsuits (and a DJ on a balcony) who alternate characters and personas with rapid precision. “Expect to witness something that is closely related to an athletic feat. It’s like going to see a sporting event and to see if these four people can play off 25 characters and can they do it without ever stopping,” says GQ.

So what can the audience expect? “It’s not in our nature to tell people what to expect when they come to our show, because no body knows what they are getting into when they come see our show.”

“What I hope you would find,” adds JQ, “is something that is equally verbally daunting as Shakespeare.

We have a lot words and it goes by fast, and it is 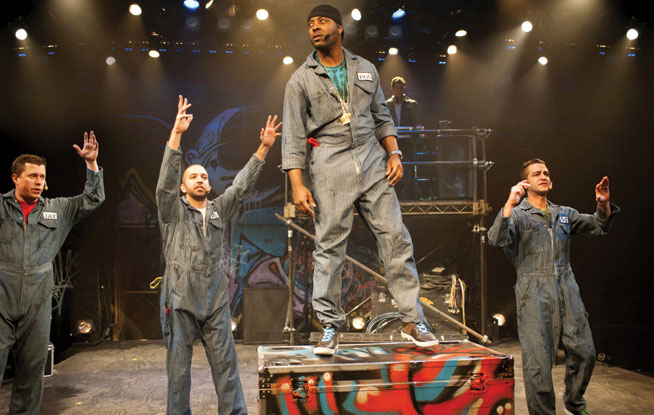 Culture
News
Theatre
Things to do
EDITOR’S PICKS
What’s On Nightlife Awards 2021: Here are the nominees...
READ MORE
It's back! What's On Lock In returns to Media One Hotel
READ MORE
Arts and culture: 5 spots we can't wait to visit at Expo 2020 Dubai
READ MORE
UAE petrol prices are set to decrease in September 2021
READ MORE
MOST POPULAR
This new family-friendly brunch includes free cinema tickets
Pics of the week: Your best photos of the UAE
How to use Playkey.me, the region's first supercharged cloud gaming service
The Mai Dubai half marathon is back in October
Exhibitions, workshops and more to experience at Sharjah Art Foundation
YOU SHOULD CHECK OUT
Our website uses cookies and other similar technologies to improve our site and your online experience. By continuing to use our website you consent to cookies being used. Read our privacy policy here.