STEP Conference Dubai - find out about the tech trends meet-up

Team work makes the dream work, as they say. STEP’s Ray Dargham gives an insight into the conference in Dubai.

How did STEP begin? STEP started in a gallery in Beirut, where I’m from. I ran workshops on emergent trends, and it was something very organic – a space for creative people to connect. When I moved here, I saw an opportunity for STEP to become bigger and better. Although STEP’s grown since it began, the core element’s the same – it’s a hub for like-minded people to connect. We intend to have 10,000 attendees by 2017, which will make us the biggest tech conference of this format in the region.

What can people expect to experience at STEP this year? We’re bigger, bolder and better than last year. We’ve tripled in size. There are three main stages instead of one, and we have leading speakers and attendees from around the world. It’s the only conference in the region that mixes entertainment with the commercial side of business for these industries. And most importantly, it’s fun. Three of the top tech speakers in the world will be there – Dave McClure, Mike Butcher and Jeremiah Owyang – sharing their stories and revealing all the latest trends.

Tech, gaming, media… how does music come into it? Although STEP focuses on the latest tech trends, it all boils down to creative spirit, which we want to celebrate and promote. Freshly’s at the forefront of changing the status quo in Dubai’s music scene, which is why we decided to partner up.

STEP ON
Our pals at Hype say…. This cracking event that brings together tech geeks, start-ups, gamers and media creatives from across the region. Dubai’s popular unplugged music event Freshly Ground Sounds was approached by STEP to put on a gig to open up the conference.

The gig – on Monday, March 30 – is free, and it will be Freshly’s biggest concert yet. If you don’t yet have a ticket to STEP, you need to register at stepconference.com/guest-list.

The line-up…
Josh Monteath: After playing at the very first gig, Josh has grown with Freshly. Now a local household name, Josh has outstanding stage presence with just a guitar and some amazing original songs. Check him out.
Norman Bataille: Cabin crew by day and musician when he’s not flying at 40,000 feet, this Cuban delight played with Freshly earlier this year.
The Deer Hum: Originally played with Freshly as an Abu Dhabi band called Hermano, and arrived at the gig with a suitcase to use as a drum. A name and a city change followed, but their beach-holiday rock still gets the crowd’s feet tapping. 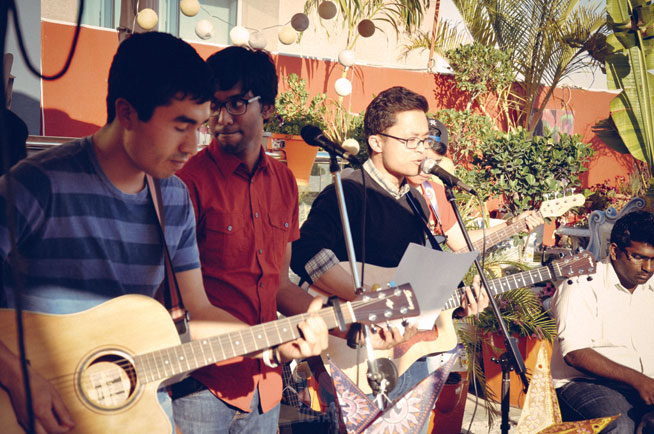 Zeroth Street Orchestra: Mariam Yakan played at the first gig, and has since formed a beautiful band to accompany her melodic vocals and powerful folk songwriting.
The Heartland Howdy Boys: Dubai’s first haute hillbilly band full of banjos, harmonies, bow ties, stand up basses, violins and dashing men.
Faye & Rock Camp for Girls UAE Mentors: Faye from Jaye and Foe is playing as a solo act with her pop-folk vocals and magic on the keys. A mentor for UAE Rock Camp for Girls, some well-known local female musicians will be joining her on stage.
Mo Zowayed: Spotted by Team Freshly at Bahrain’s Museland Festival, Mo and his band are driving from Bahrain for the gig.

Culture
News
Nightlife
Things to do
Workshops
EDITOR’S PICKS
Here's the full list of UAE public holidays in 2023
READ MORE
23 incredible things to look forward to in the UAE in 2023
READ MORE
Hidden gems: 10 UAE desert pop-ups to discover this winter
READ MORE
Where to travel in 2023: 10 new flight routes from the UAE
READ MORE
MOST POPULAR
Through my eyes: The UAE according to Natalia Shustova
Review: La Niña
1484 by Puro launches the UAE’s highest afternoon tea
Check out 10 of the most expensive homes for sale in Dubai right now
The best ways to say "I love you" at JW Marriott Marquis Hotel Dubai
YOU SHOULD CHECK OUT
Our website uses cookies and other similar technologies to improve our site and your online experience. By continuing to use our website you consent to cookies being used. Read our privacy policy here.