Your band could support Thirty Seconds To Mars

What’s On and Hype have details of Live Nation search for the support for Thirty Seconds To Mars in Dubai on April 10 at World Trade Centre.

In a local band? Dream of being handpicked by a famous rock band to play in front of 10,000 people? Well, now’s your chance! Thirty Seconds To Mars will be selecting a local act to play at their Dubai gig next month, say our friends at Hype.

Dubai’s alternative rockers Juliana Down are already primed to support the LA rock band, fronted by Hollywood A-lister Jared Leto, but now gig promoter Live Nation has launched a search for another local band or solo artist worthy of sharing the stage. 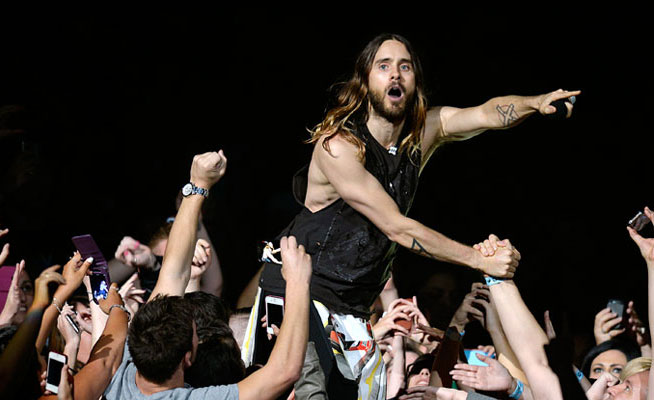 The competition is open to anyone in the UAE or GCC, there’s no limit on age or the number of band members, and entering couldn’t be easier. If you think you or your band can own a bigger platform, all you need to do is upload a 30-second performance clip to Facebook or Twitter. Check out marsindubai.com for full details, but hurry, as the closing date for entries is Monday, March 23.

A judging panel – including Live Nation MD James Craven, Universal Music MENA’s Patrick Boulos and Juliana Down frontman Dia Hassan – will whittle the entries down to ten finalists before Thirty Seconds To Mars pick the winner. The lucky band or artist will be announced on April 5.

“Opportunities like this don’t come along for local bands every day,” said Dia. “This is a fantastic chance to play in front of a huge crowd and get your band recognised by rock legends at the same time. If you are in a band, you’d be mad to miss this opportunity. I’m looking forward to judging the entries.”

News
Nightlife
EDITOR’S PICKS
UAE holiday dates announced for Eid Al Adha
READ MORE
Update: Emirates again extends suspension of flights from India to UAE
READ MORE
Coming soon: Everything we know about Ain Dubai so far
READ MORE
Khorfakkan set to open new tourist attraction 580 metres above sea level
READ MORE
MOST POPULAR
Sign your kids up for a five-day theatre camp at The Junction this summer
Pics of the week: Your best photos of the UAE
New films to watch in cinemas this week: July 22 to 28
Caesars Palace Dubai transforms into a summer playground this Eid
10 things to do in Dubai that are free (or cost next to nothing)
YOU SHOULD CHECK OUT
Our website uses cookies and other similar technologies to improve our site and your online experience. By continuing to use our website you consent to cookies being used. Read our privacy policy here.