What’s On has pictures of Dubai Metro art, part of Dubai Arts Season and the Dubai Open Air Museum initiative, with Dubai Culture and RTA.

Dubai’s rapid growth into an art hub for the region has continued with the roll out of decorated Dubai Metro carriages.

Entire trains were handed as a blank canvas to prominent local talent, and the results are spectacular.

Abdul Qader, Rachid Koraichi and Safwan Dahoul were those invited to take part in the scheme, following a successful launch with a carriage wrapped with a photograph by HH Sheikh Hamdan bin Mohammed bin Rashid Al Maktoum, Crown Prince of Dubai.

According to the RTA, these new carriages make Dubai Metro a moving “Icon of Happiness”. 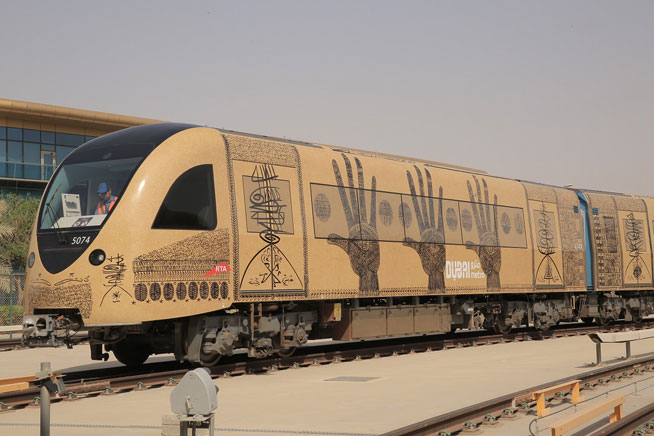 Qader’s work has been described as ‘exploring the artistic essence behind culture, identity and surroundings’. His works with the RTA are explained as ‘a visual energetic story’. It’s certainly the brightest of the designs, featuring the whole rainbow of colours, blended seamlessly through shadows and sparkles.

Koraïchi’s work, meanwhile, is more clearly touching on Arabic culture, and is dominated by signs, symbols, ciphers and calligraphic scripts.

And finally Dahoul, who it is said ‘mirrors the corporal and psychological effects of alienation, solitude, and longing that punctuate the human experience at various stages in life’.

The unveiling is the latest activation around town for the Dubai Open Air Museum initiative. Dubai Culture and RTA is also working to transform six of the Dubai Metro stations into museums. 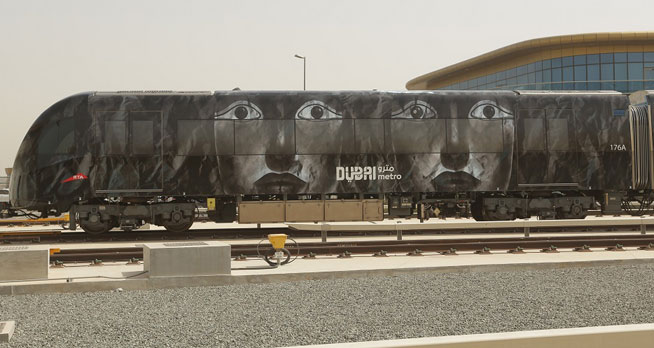 In other art-inspired transport news, do-gooders The Sameness Project just completed their special initiative Restart the Art – a campaign that turned two labour camp buses into moving pieces of art.

Local artists were teamed up with 43 labourers to create artworks that reflected their stories, whilst representing their greatest joys, pain and dreams.

Members of the public were invited to vote for their favourites on restarttheart.com, and the winning pieces were given a prominent spot on the buses. Keep an eye out for these colourful coaches zooming around town for just one more week.

Art
Culture
News
EDITOR’S PICKS
Ain Dubai will open with fireworks, live music and a drone show
READ MORE
Incredible Aura SkyPool to open in Palm Tower this November
READ MORE
Brit Grand Slam hero Emma Raducanu confirmed for Mubadala Tennis
READ MORE
What’s On Nightlife Awards 2021: Here are the nominees...
READ MORE
MOST POPULAR
Free parking announced in Dubai on Thursday, October 21
Atlantis the Palm's Culinary Month is back with some amazing restaurants
7 fun spots to celebrate Halloween in Dubai with the family
The best places to watch the spectacular Ain Dubai fireworks show
This brunch serves up delicious Arabic dishes and non-stop captivating entertainment
YOU SHOULD CHECK OUT
Our website uses cookies and other similar technologies to improve our site and your online experience. By continuing to use our website you consent to cookies being used. Read our privacy policy here.