When you think of rap music you inevitably think of a rich heritage of American talents. Often coming from the streets, frequently of Afro American origin and almost always frothing over with forthright views and agitated attitudes, it is a genre that rises and falls in popularity but one that never fully goes out of fashion. Recent years, however, have seen it explode into popular culture once more, not least on UK shores. Far from being a countercultural musical movement that kids get can down with, engage with and annoy their parents with, rap music in this day and age is very much part of the mainstream pop canon.

Helping to make it so is Elliot John Gleave, better known by his stage name of Example. Signed to major labels Epic and Sony Music, the London-born wordsmith first rose to prominence using just the initials E.G but has now had major worldwide and chart topping success as Example.

Now aged 32, the singer, songwriter, rapper and producer also plays keys and synthesisers. His output fuses together many different strands of music from hip-hop to house, Euro dance to drum ‘n’ bass, big beat to rave, trance to garage, and has never been more popular than it is now. 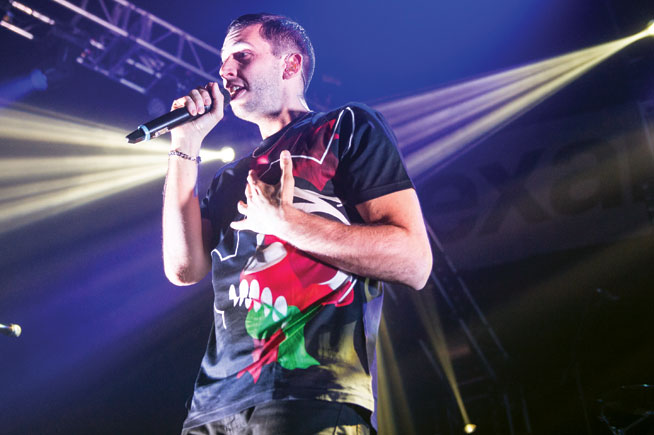 Example has well over a million followers, has spent years touring the globe and has sunk his fair share of champagne, and it’s all off the back of No.1 singles such as Changed The Way You Kiss Me (produced by Michael Woods) and Stay Awake (produced by electronic duo Nero). It was his debut studio album Won’t Go Quietly that first alerted the world to this man’s talents though. That album was released in 2009 on Data Records and spawned early Top 20 singles Watch The Sun Come Up and the album’s title track. A number of other hits from it followed and so did the next album not long after in 2011.

This one, Playing The Shadows, also secured Example a No.1 slot on the pop charts and charted in many European countries, as well as Australia, where it was also certified Platinum. As such, the logical next step was to try and crack American, as so many have tried before, with varying results. This meant the London man signed with Mercury and in 2014 released Live Life Living, which was partly written in LA. Fast-forward to now and Example is reportedly working on his sixth longplayer and has spent time in the studio with hot dance acts Netsky and Sigma. A release date is uncertain, however, especially as Example has taken time out recently to spend with his young son, though there are rumours that in 2016 he’ll be back with a bang and a full touring live band.

Example was born in Hammersmith in London and has claimed before that the main reason he got into rap was thanks to his introduction to hip-hop and albums by Wu-Tang Clan and Snoop Dogg, the latter of which was purchased mainly because of “the cool cover art”. Apparently not very good at sports at school, a young Example managed to fit in with his peers socially through rapping, and his first experience of it was through a rap battle at a house party in Shepherd’s Bush in 1994. Legend has it that in that battle he “completely destroyed” his opponents and “a fight broke out so I sprinted home”.

These years were also key in that they found Example hooking up with Joseph Gardner, aka Rusher, the producer with which he worked closely on releases for his own All The Chats label. One of the pair’s earliest works was a concept album made in the audio booth of their university’s film department. It contained the now well-known cut A Pointless Song, which was Example’s first white-label vinyl release.

Before finding chart success Example also spent time working as a voiceover artist and editor for the Paramount Comedy Channel (now Comedy Central), and worked as an editor at MTV Networks. These days he is no longer behind the scenes but rather front and forward.

May 1
Nasimi Beach, Atlantis The Palm, Dubai, 5pm to 3am, ladies free before 7pm, Dhs100 in advance, Dhs150 at the door. Taxi: Nasimi Beach. atlantisthepalm.com

Bars
News
Nightlife
Things to do
EDITOR’S PICKS
Ain Dubai will open with fireworks, live music and a drone show
READ MORE
Incredible Aura SkyPool to open in Palm Tower this November
READ MORE
Brit Grand Slam hero Emma Raducanu confirmed for Mubadala Tennis
READ MORE
What’s On Nightlife Awards 2021: Here are the nominees...
READ MORE
MOST POPULAR
There's unlimited good vibes at this neighbourhood hangout spot
Meet the cooking showman who makes OPA Dubai all the more joyful
Review: Niri Restaurant and Bar, Mamsha Al Saadiyat
Harlem Globetrotters are coming to Expo 2020 Dubai this October
New venue Urla brings coastal dining to the heart of Downtown Dubai
YOU SHOULD CHECK OUT
Our website uses cookies and other similar technologies to improve our site and your online experience. By continuing to use our website you consent to cookies being used. Read our privacy policy here.