What’s On has all you need to know about Dubai Duty Free Darts Masters at Dubai Tennis Stadium on May 28 and 29. Get tickets information.

Eight men step up to the oche to battle it out at the Dubai Duty Free Darts Masters. Who will you cheer to victory? 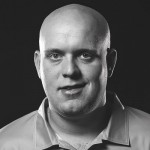 Name: Michael ‘Mighty Mike’ Van Gerwen
Age: 26
Nationality: Dutch
PDC Order Of Merit: 1
Walk-on music: Seven Nation Army by The White Stripes
The player: A darts prodigy, the World No 1 took up the sport at the age of 13, becoming the youngest player ever to lift the World Masters trophy four years later. Van Gerwen struggled to find his form over the next six years, but 2012 proved a breakthrough and by the beginning of 2013 he’d gone from 38th in the world rankings to 4th. In 2014, aged just 24, he became the youngest ever PDC World Championship winner.
Chat: Phil Taylor says of Van Gerwen, “He is to darts what Jonah Lomu was to rugby.”
Did you know? Following his title win last year, Mike’s doppelganger, Little Britain comedian Matt Lucas, pretended to be the sportsman, telling TV cameras “Sorry haters, I won the darts!” 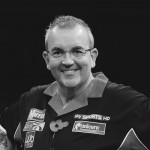 Name: Phil ‘The Power’ Taylor
Age: 54
Nationality: English
PDC Order Of Merit: 2
Walk-on music: The Power by Snap!
The player: Widely regarded as the greatest player of all time, Taylor has broken every record going, claiming 209 tournament wins over his 25-year career, including 16 World Championships. He was originally nicknamed The Crafty Reptile, due to his association with mentor Eric ‘The Crafty Cockney’ Bristow. Later, Sky Sports production manager Peter Judge told Taylor he needed a new nickname. He then trod on an empty CD case for Snap!’s The Power and that was that.
Chat: “I’m flying to China and Japan – if you think Beckham is a big name, you should see me there.”
Did you know? Taylor left school at 16 and spent his early working years making ceramic toilet roll-holders. 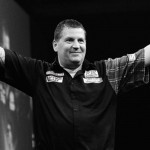 Name: Gary ‘The Flying Scotsman’ Anderson
Age: 44
Nationality: Scottish
PDC Order Of Merit: 3
Walk-on music: Jump Around by House Of Pain
The player: The new world champion, thanks to a narrow win over Phil Taylor in January, is currently enjoying the highest ranking of his career. Earlier this year Anderson was named PDC Player Of The Year, Pro Tour Player Of The Year, Fans’ Player Of The Year and Players’ Player Of The Year at the annual awards dinner. So, it’s fairly safe to say the Scotsman is bang in form for Dubai.
Chat: “The day I get big-headed and cocky, somebody will slap me, which is how it should be.”
Did you know? A former builder, Anderson moved to Somerset in England to run The Wellington Arms pub for fellow PDC player Steve Grubb. His regulars there include former darts world champions Trina Gulliver and Mark Webster. 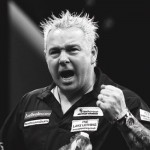 Name: Peter ‘Snakebite’ Wright
Age: 45
Nationality: Scottish
PDC Order Of Merit: 5
Walk-on music: Don’t Stop The Party by Pitbull
The player: After being dumped out of the BDO World Darts Championship in 1995, Wright stepped away from the game for a decade. But while watching the Grand Slam Of Darts, and remarking that he’d beaten some of its stars, his wife convinced him to give the professional game another shot. He went on to reach the World Championship Final in 2014 and has developed a fierce rivalry with Dutchman Michael Van Gerwen.
Chat: “I like how wrestlers go on TV and wind up their opponents. I’ve always said darts players should go down that route.”
Did you know? Wright’s mohawk takes his wife two hours to style. He likens her painting his snake on his head to applying war paint before battle. 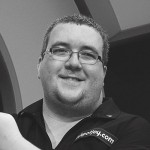 Name: Stephen ‘The Bullet’ Bunting
Age: 30
Nationality: English
PDC Order Of Merit: 24
Walk-on music: Surfin’ Bird by The Trashmen
The player: Still seen as a player on the way up, Bunting has nonetheless already enjoyed international success. A two-time World Masters winner, he was reigning Lakeside Champion when he crossed over to the PDC last year. 2014 saw him make his World Series Of Darts debut, reaching the Sydney Darts Masters final before losing out to Phil Taylor.
Chat: “If I win the Premier League, I’ll definitely be crying, 100 per cent.”
Did you know? Bunting’s choice of walk-on song, Surfin’ Bird, is intended to poke fun at his resemblance to Family Guy character Peter Griffin. The song is the character’s favourite. 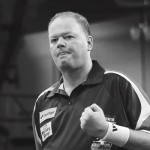 Name: Raymond ‘Barney’ Van Barneveld
Age: 47
Nationality: Dutch
PDC Order Of Merit: 11
Walk-on music: Eye Of The Tiger by Survivor
The player: The reigning Premier League champion is a five-time World Champion and the most successful Dutch player in darts history. Van Barneveld’s 20-year career has also seen him pick up the UK Open title twice, and lift the trophy at the Las Vegas Desert Classic and the Grand Slam Of Darts. His 2007 victory over Brit Phil Taylor in a sudden-death leg in his debut PDC season is widely considered to be one of the sport’s greatest ever games.
Chat: Phil Taylor is a fan and says, “I don’t think Barney has a nasty bone in his body.”
Did you know? Although he’s naturally left-handed, Van Barneveld throws with his right. 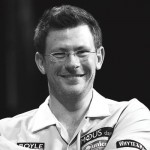 Name: James ‘The Machine’ Wade
Age: 32
Nationality: English
PDC Order Of Merit: 6
Walk-on music: The Boys Are Back In Town by Thin Lizzy
The player: Crashing on to the scene with a win at the Basingstoke Open aged just 14, Wade initially pursued a career in mechanics before going pro in darts. The left-hander has since won eight major titles, including two World Grand Prix and the 2014 Masters. In 2008, Wade became the first player in the Premier League’s history to defeat Phil Taylor on his debut.
Chat: “Some darts players take defeat personally, like a kick in the nether regions.”
Did you know? When Wade’s mates told him he didn’t stand a chance with his now fiancée, Sammi, he walked straight up to her car window and asked her out. 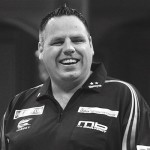 Name: Adrian ‘Jackpot’ Lewis
Age: 30
Nationality: English
PDC Order Of Merit: 4
Walk-on music: Reach Up by Perfecto Allstarz
The player: Another teen prodigy, Lewis came to fame by winning the British Teenage Open at 18. He was the protégé of Phil Taylor until 2007, and the pair maintain a fierce rivalry. Lewis has won the World Championship twice, in 2011 and 2012, when he became the third player in history to successfully defend his first title.
Chat: Speaking of media attention surrounding his love life: “I know I’d just become World Champion but shouldn’t the press be following someone else? It wasn’t like we were Peter Andre and Katie Price.”
Did you know? Lewis once almost played an exhibition match in the Philippines with boxing star Manny Pacquiao.

Peter Wright lost in last year’s Dubai Duty Free Darts Masters but is determined to go one better this time. Recalling his 2014 defeat in the outdoor tournament, Wright says, “I felt like I was in a hot shower with all my clothes on.”

How much do you practice? I play for at least five hours every day, and sometimes as much as eight or ten hours a day. It depends on how much I’m enjoying it. If I’m doing the right stuff in practice, I find it easy to play for long periods. But you can over-practice. Sometimes a little bit of rest can be pretty good for your game. My body is fine with the strain, you get used to it. If a non darts player played for a few hours, their arms would ache the next day because they’re not used to using those muscles. 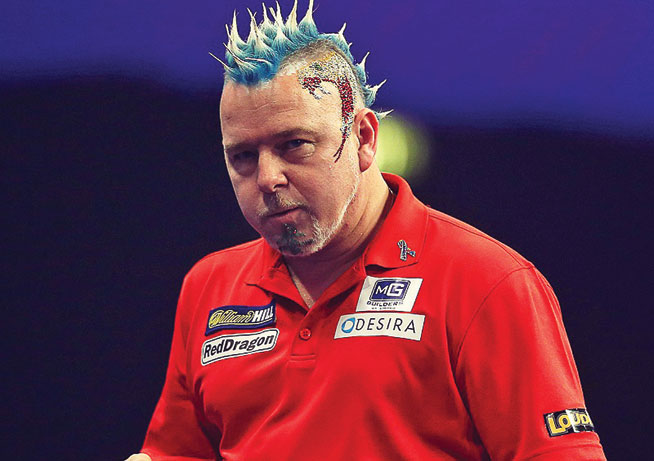 Do you ever get fed up of looking at a dartboard? You’ve got to push yourself because this is my job, it’s my living. It’s the same as anybody’s work; you can’t wake up and phone in sick just because you don’t fancy going to work. In darts there are other players behind me in the rankings who want my place and want to play in Dubai and all these international tournaments. If you don’t practice you’ll get overtaken. You can always improve. No matter how good you get, you can improve your game. My target is to improve every time I play.

Do you film yourself when you practice? No, I don’t, but I’ve thought about videoing myself, especially when I’m going through a good patch, to see what is working well. I know a lot of sportsmen use cameras to analyse their play.

How big a role does diet and nutrition play in darts? You’ve got to eat the right sort of things. I’ve started eating more salads, and other healthy foods to make me last through the day, and I drink plenty of water. Darts is paying more attention to that sort of thing now, and it’s good that the youngsters watching on TV don’t see big-bellied men playing darts.

You’re definitely the guy with the biggest personality in darts right now, aren’t you? Yeah, I don’t know what it is about the rest of the guys, but they just want to go out and play like robots. I think you’ve got to be different. I always said that if I ever made it in darts I’d stand out and be different and I’m doing that now. But I’m not just the clown or the entertainer, I’m actually a darts player too.

Has your image ever distracted you from your game? Not at all. The media said that if I spent as much time on the practice boards as I did on my hair I’d be a better player. But I won’t change my image – it’s part of my preparation. My wife does my hair, which can take two hours, and during that time I’m getting into the zone. Years ago [darts legend] Eric Bristow told me, “Get rid of the silly hair and you’ll play better”. Nowadays he says to me, “Whatever you do, don’t change, it’s who you are.”

News
Sport & Fitness
Things to do
EDITOR’S PICKS
Exclusive Reveal: Topgolf Dubai is here and ready for action
READ MORE
65 of the best outdoor bars and terraces in Dubai
READ MORE
7 brilliant dining deals in Dubai this month
READ MORE
18 of Dubai's most Instagrammable breakfast spots
READ MORE
MOST POPULAR
Abu Dhabi updates road entry requirements - January 2021
Did you feel it? Minor earthquake tremors felt by UAE residents
The stunning Hermès Carré Club is now open in Alserkal Avenue
Pics of the week: Your best photos of the UAE
Watch: A look inside Conor McGregor's Dhs20,000 per night Dubai villa
YOU SHOULD CHECK OUT
Our website uses cookies and other similar technologies to improve our site and your online experience. By continuing to use our website you consent to cookies being used. Read our privacy policy here.