Manny Pacquiao "WILL fight in the UAE"

What’s On has news that Manny Pacquiao v Amir Khan in Dubai could happen in March, according to the man looking after Bob Arum in the UAE.

The executive is directly responsible for promoter Bob Arum’s affairs in the region, according to 7Days newspaper, and he revealed that he has been given word the Filipino champion has his eyes on a March 2016 bout here.

The 36-year-old is the talk of the boxing world after his spirited display against Floyd Mayweather on May 2 in Las Vegas. Venues across Dubai were packed to the rafters from 6am on a Sunday morning as legions of fight fans swarmed to watch the ‘Fight Of The Century’. That the bout ended in defeat, much to the dismay of the majority of fans in the Middle East, hasn’t lessened the appetite for a contest in Dubai or Abu Dhabi. 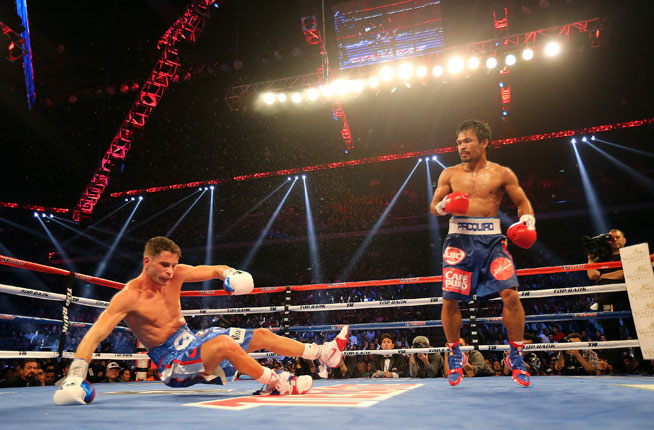 There has been talk of British fighter Amir Khan, a sparring partner to The Pac Man, will be the most likely opponent, having himself championed the UAE’s bid to host world-class boxing. The pair’s respective schedules is the only bump in the road, with Khan angling for a shot of Mayweather later this year, and Pacquiao likely to be out of competitive action until early 2016 due to shoulder surgery.

Speaking to 7Days, Muhammad said: “Bob Arum gave me a commitment before the Mayweather fight that win, lose of draw, Manny’s next fight will be in the Emirates. If Manny would have had his way he would have fought Mayweather in the UAE. But Floyd refused to fight anywhere other than the MGM Grand in Las Vegas.

“We are already in talks to find an opponent and Amir Khan seems the most likely. He was previously in talks to fight Pacquiao in the UAE late last year.”

The boxing chief also said fans would not necessarily have to wait a year until a championship bout, adding: “In the meantime we want to hold a world title fight in Dubai this year. We want the first fight in the fall and are looking to bring another Filipino champion to this region.”

News
Sport & Fitness
EDITOR’S PICKS
Here's the full list of UAE public holidays in 2023
READ MORE
23 incredible things to look forward to in the UAE in 2023
READ MORE
Hidden gems: 10 UAE desert pop-ups to discover this winter
READ MORE
Where to travel in 2023: 10 new flight routes from the UAE
READ MORE
MOST POPULAR
Cult Expo bakery, Bread Ahead to open in Mall of The Emirates
First look: Milos by Costas Spiliadis opens in Atlantis the Royal
Upcoming performances, international artists and more in Dubai
16 upcoming shows, sports events, concerts and festivals in Abu Dhabi
Win a holiday around the world with Dubai Creek Resort
YOU SHOULD CHECK OUT
Our website uses cookies and other similar technologies to improve our site and your online experience. By continuing to use our website you consent to cookies being used. Read our privacy policy here.