Game, set, catch (of the day) – Could this be built in Dubai?

What’s On has details of a proposed underwater tennis court – the brainchild of Krysztof Kotala – to be built off the coast of Dubai.

Dubai is certainly no stranger to unusual tennis stunts.

In 2005, sporting greats Roger Federer and Andre Agassi participated in the highest tennis court game when they played on the iconic helipad of the Burj Al Arab. 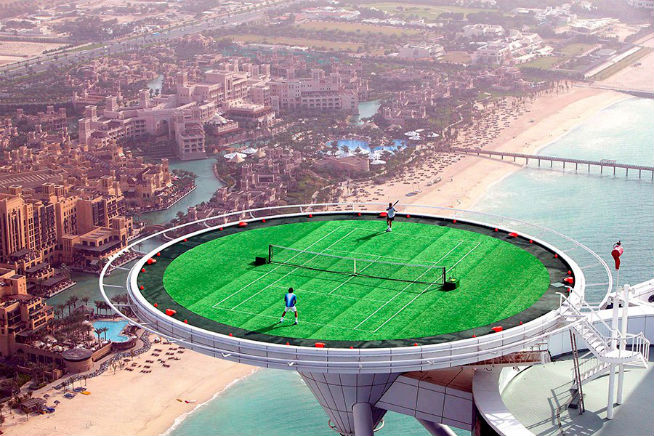 But the latest proposal from a Polish architect is bringing things back down to earth, and then below the surface.

The enormous underwater tennis stadium is the brainchild of Krysztof Kotala who debuted his design renderings on the Facebook page of 8+8 Concept Studio.

Designs show schools of fish swarming together overhead in a well-lit facility covered by a giant glass dome.

However engineers have been hotly debating the possibility of a such a feat since the renderings appeared online, explaining that actually constructing this would involve massive engineering challenges and exorbitant costs. 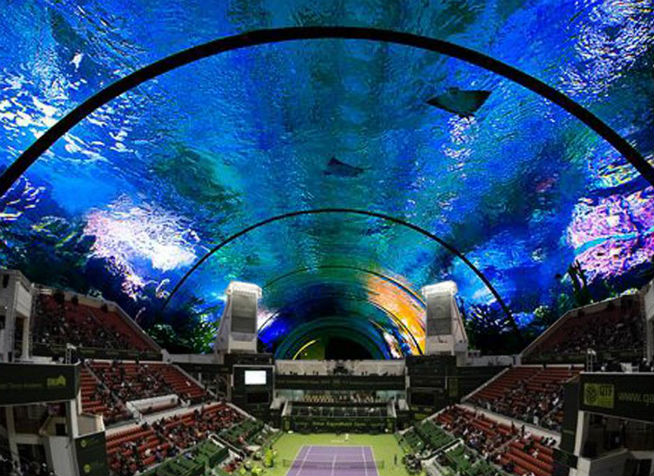 An arched roof “would weigh possibly a hundred tonnes”, said Sarah Fray, director of engineering and technical services at the Institution of Structural Engineers in London. Plus, depending on how submerged the courts are, sunlight penetration could either be too dark or bright enough to blind tennis players when refracted by the glass and the water. “I can’t imagine players not finding the fish distracting, either,” joked Fray in a report via The Daily Mail.

Kotala, smitten with his unusual idea, insists: “This will be something original. It should be somewhere where there is the tradition of tennis. Dubai is perfect for this idea.”

While his designs are nothing more than concepts at this point, Kotala is hopeful for an investor in order to turn his vision into a reality.

Several underwater projects have been pitched – and executed – in Dubai over the past decade.

Recently The Kleindiesnst Group announced their underwater villas as part of the European development on the World Islands.  Now known as ‘The Floating Seahorse’, the selection of the properties were first unveiled in March, but have since garnered huge interest around the world.

Each villa will be split into three levels – one underwater, one at sea level, including terracing, and an upper deck – will have a master bedroom, kitchen, jacuzzi, dining room and bathroom. They will be moored above an artificial coral reef which will be ‘a protected area in which seahorses can safely live and breed’.