What’s On has news about the return of Red Bull Flugtag Dubai, on November 20, 2015. See videos and pictures, and see competition rules.

Have you ever wanted to soar like a bird or just have the urge to fling yourself off a six-metre high platform into water? Well, good news, now’s your chance.

After almost a decade, the Red Bull Flugtag is gliding, or rather plummeting its way back to Dubai on November 20 2015.

From aviation fanatics to rookie adrenaline-junkies, everyone is welcome. Teams have until July 20 to apply for the chance to put their very own human-powered flying machines to the test off of the Red Bull flight deck in front of thousands at the Dubai Creek. 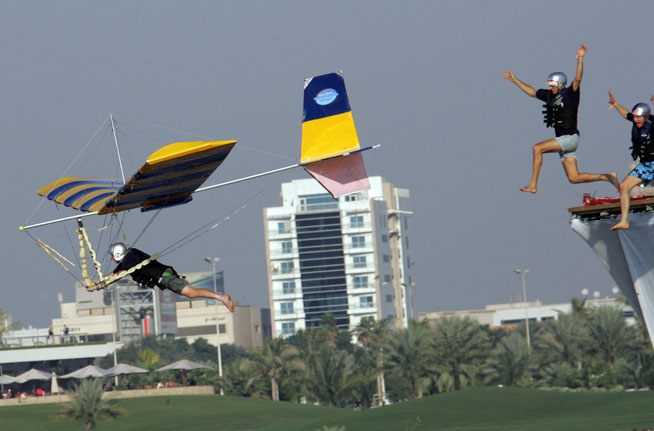 Distance isn’t the only aim in this competition. Between 40 and 42 teams will be chosen by Red Bull and judged not only on how far their contraptions glide, but also on creativity and showmanship. So imagine the Wright brothers, but in chicken suits and doing the Gangnam Style dance.

The team to beat is the ‘Chicken Whisperers’, who broke the world record when their flying creation reached a massive 78.64 metres in Long Beach, California in 2013.

Dubai last hosted a Flugtag in 2007 when 36 teams, cheered on by a crowd of 30,000, took up the challenge. Gliding for 21 metres, it was the team Snoopy vs The Red Bull that went home victorious – and soggy.

Meaning ‘flying day’ in German, the Red Bull Flugtag began in Vienna back in 1992 and is now something of institution, with more than 100 events having taken place all over the world.

Team members must be over 16 years old, produce a handmade aircraft no heavier than 200kg – including the pilot – and pass the Red Bull Flugtag safety check. For more information on how to apply head to redbullflugtag.com/uae.

News
Outdoor
Sport & Fitness
Things to do
EDITOR’S PICKS
UAE holiday dates announced for Eid Al Adha
READ MORE
Emirates extends suspension of flights from India to UAE again
READ MORE
Coming soon: Everything we know about Ain Dubai so far
READ MORE
Khorfakkan set to open new tourist attraction 580 metres above sea level
READ MORE
MOST POPULAR
It's Dhs350 to brunch, stay and play at the What's On Lock In this weekend
UAE weather: Temps of over 50ºC recorded in the shade yesterday
Get a free Expo 2020 day pass when you fly with Emirates
A popular fairy-tale is gracing the stage at The Theatre at Mall of the Emirates in August
UAE petrol prices will increase again in August 2021
Exclusive interview: John Cena on his role as a 'douchey Captain America'
YOU SHOULD CHECK OUT
Our website uses cookies and other similar technologies to improve our site and your online experience. By continuing to use our website you consent to cookies being used. Read our privacy policy here.