What’s On has the new Jetman Dubai video, a new stunt from XDubai athlete Yves Rossy. The video was posted on Sheikh Hamdan Instagram @Faz3.

The ex-fighter pilot from Switzerland became the face for XDubai last year when video footage emerged of him using jet-propelled wings in tandem with a light aeroplane.

But now his latest video, posted on the Instagram account of Sheikh Hamdan, Crown Prince of Dubai, shows the advancements in his machine, whizzing back and forth in a series of stunning loops, turns and swoops above Dubai’s Palm, in tandem with another man.

That man is Vince Reffet, a champion skydiver, who grabbed the world’s attention as one part of the tandem base jump from the top of the Burj Khalifa in 2014. 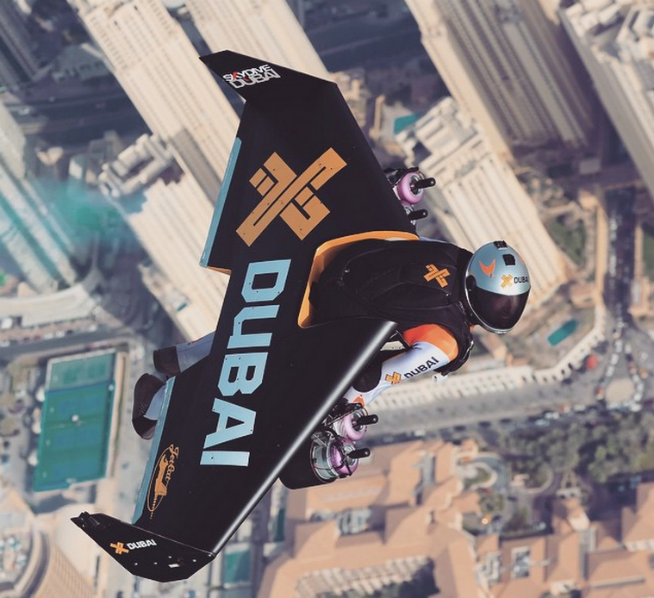 The release of the video came shortly before a press conference was held at Burj Khalifa to announce specific details about Jetman’s plans for the future.

What’s On was there as Rossy himself said: “I’ve always wanted to become like a bird. I wanted to have the freedom of a skydiver but the displacement of an aviator. You fly as free as a skydiver but with the movement of a pilot.

“And now I am now no longer alone.”

In a recent interview with Khaleej Times, Rossy revealed his hope for future of his technology.

“The idea is not to do transport or distance,” he said. “An airplane is much more comfortable for that. The idea is to play like birds, to profit from the third dimension. As a normal human being you know two dimensions: forward and backwards and left and right. But suddenly you have something on your back permitting you to go up and down.

“That’s what’s so fantastic. You have one more dimension to play with. That’s pure freedom.”

Time to turn the page to the second chapter of @jetman, as we mark a new milestone in the history of human flight! @x_dubai #jetmandubai عباس بن فرناس.. والحلم

Check out the full video here:

News
Outdoor
Sport & Fitness
Things to do
EDITOR’S PICKS
Here's the full list of UAE public holidays in 2023
READ MORE
23 incredible things to look forward to in the UAE in 2023
READ MORE
Hidden gems: 10 UAE desert pop-ups to discover this winter
READ MORE
Where to travel in 2023: 10 new flight routes from the UAE
READ MORE
MOST POPULAR
26 of Dubai's best beachfront restaurants
8 wonderful things to do in Dubai this week: Feb 6 to 9
Where to go to get your Al Baik fix in the UAE
Reset and recharge with a relaxing staycation at this stunning Dubai hotel
The most expensive apartment in Dubai just sold for Dhs410 million
YOU SHOULD CHECK OUT
Our website uses cookies and other similar technologies to improve our site and your online experience. By continuing to use our website you consent to cookies being used. Read our privacy policy here.